Forget jokes about crossing the road. New research identifies chickens as a vivid symbol of the transformation of the biosphere in our time 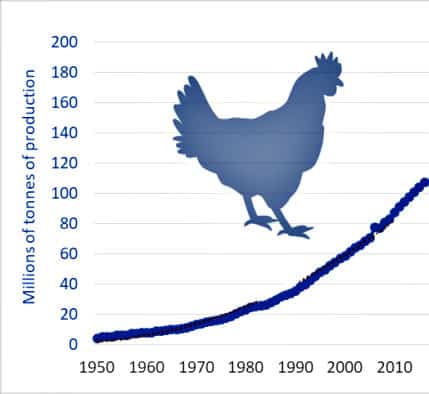 Forget jokes about crossing the road. New research identifies chickens as a vivid symbol of the transformation of the biosphere in our time

Continuing our series on metabolic rifts

How will future geologists recognize the Anthropocene? What features of the geological record will enable them to say that a particular layer of rock or sediment was formed after the Holocene ended?

Many suggestions have been made, including the presence of radioactive fallout, plastics, fuel ash, concrete, and various chemical pollutants that leave long-lasting and readily identifiable traces. All were rare or non-existent before the second world war, and all have been widely deposited since.

That view is no longer tenable. An important new paper, published in the journal Royal Society Open Science (RSOS), makes a convincing case that modern broiler chickens are a “distinct and characteristic new morphospecies ….[that] symbolizes the unprecedented human reconfiguration of the Earth’s biosphere.”[1]

The lead author of  “The Broiler Chicken as a Signal of a Human Reconfigured Biosphere” is Carys Bennett of the School of Geography, Geology and the Environment, University of Leicester. Her nine co-authors include Jan Zalaciewicz, Mark Williams and Matt Edgeworth, members of the official Anthropocene Working Group (AWG).

At any given time, there are some 22.7 billion domesticated chickens on Earth, 20 times more than any wild bird species. The total biomass of domesticated poultry, mostly chickens, is three times the biomass of all wild birds combined. Astonishing as those figures are, they substantially understate the overwhelming presence of chickens in the biosphere because, unlike wild birds, chickens live only five to seven weeks from hatching to slaughter, so many times 22.7 billion pass through the vast maw of industrial agriculture each year. The UN Food and Agriculture Organization says that 65.8 billion chickens were killed worldwide in 2016, but that figure is almost certainly too low.

Humans domesticated the ancestors of today’s chickens about 6,000 years ago, and we have been eating their eggs and meat ever since, but recently our consumption has increased markedly, vastly outpacing population growth. From a biological and geological perspective, what’s even more remarkable is the very recent change in the nature of the chickens we eat.

Writing in The Conversation, Bennett and colleagues describe what they found when they compared modern chicken bones to bones from the past: “Modern broiler chickens are radically different — they have a supersized skeleton, distinct bone chemistry reflecting the homogeneity of their diet and significantly reduced genetic diversity.”[2]

As the RSOS article points out, those changes reflect deliberate breeding for rapid growth, including selection for a metabolic mutation that makes them constantly hungry, leading to “at least a doubling in body size from the late medieval period to the present in domesticated chickens, and an up to five-fold increase in body mass since the mid-twentieth century.”

As a result, archaeologist Alison Foster says, “The body shape, bone chemistry and genetics of the modern meat chicken is unrecognizable from wild ancestors and anything we see in the archaeological record.”[3]

Every year, billions of chicken bones enter landfill sites, which means that future geologists will find their fossils in great abundance, in sedimentary strata in many parts of the world. As AWG convenor Jan Zalasiewicz comments, “It usually takes millions of years for evolution to occur, but here it has taken just decades to produce a new form of animal that has the potential to become a marker species of the Anthropocene — and the enormous numbers of these chicken bones discarded worldwide means that we are producing a new kind of fossil for the future geological record.”[4]

Bennett and her colleagues conclude their paper with a powerful affirmation of the scientific and social significance of broiler chickens in the Anthropocene:

“The advent of the fast-growing broiler morphotype in the 1950s and its uptake across industrial farms worldwide, can be viewed as a near-synchronous global signal of change to the biosphere, currently maintained by humans and the technosphere. Modern broiler chickens are morphologically, genetically and isotopically distinct from domestic chickens prior to the mid-twentieth century. The global range of modern broilers and biomass dominance over all other bird species is a product of human intervention. As such, broiler chickens vividly symbolize the transformation of the biosphere to fit evolving human consumption patterns, and show clear potential to be a biostratigraphic marker species of the Anthropocene.”

Bennett et al. have made an important contribution to our understanding of the Anthropocene, by identifying important but previously unrecognized connections between animal biology, human food, geology, and the onset of a new epoch in Earth System history. Their paper implicitly undermines the claim, made by some academics, that a purely “geological Anthropocene” can or should be distinguished from other aspects of global environmental change.

The paper’s principal weakness is the limited attention given to the social and economic forces that drove the rapid evolution of a new species of food animal, and its nearly universal replacement of other species in farms worldwide. Why did the change in chicken biology, production and consumption happen when it did, and in the way it did? How was it connected to broader changes in agriculture in the last half of the twentieth century? How is it affecting twenty-first century food systems?

Future articles in this series will consider those questions and what the answers may mean for life in the Anthropocene.