Jonathan Neale is a climate justice activist based in Britain 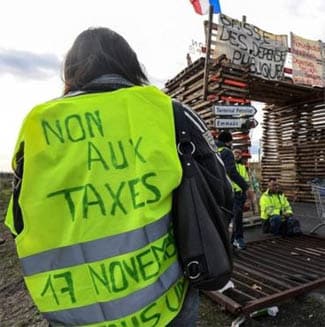 and author of Stop Global Warming: Change the World.

Say what you like about the gilet jaunes (yellow vests) in France, there is one conclusion we climate activists must draw. We must have nothing to do with carbon taxes, in any form. This article explains why.

A carbon tax is a tax on burning any fuel that puts carbon dioxide into the air and thus increases climate change. The idea — and it sounds good — is that because people have to pay that bit more, they will ration their use of those fuels. That way, we can slow down climate change. That’s why so many climate activists, especially in the U.S., have campaigned for carbon taxes.

Moreover, because our incomes are lower, we really feel the extra tax. And we can’t reduce our usage much, because we still have to cook, heat the house and get to work.

It’s not just that carbon taxes are unfair. After all, many climate activists say that if it’s unfair and it still stops climate change, then it’s worth it. There’s something to be said for that point of view. After all, ordinary people are going to pay a lot more for the effects of climate change than we will ever pay in carbon taxes.

But the real kicker is the political effect of the unfairness. It opens a window for the right-wing — the climate deniers and the oil and coal companies. They can build a coalition between themselves, those who want no climate action, and large numbers of ordinary people who feel cheated by affluent greens. That coalition can be devastating because the environmentalists are hit from two sides.

This has happened many times. It’s how the yellow vests started out in France, though they have gone far beyond that now, and what they are doing is wonderful.

Still, they got the carbon tax on diesel fuel repealed. Many in the environmental movement, particularly outside France, felt that as a defeat.

That’s one reason for being against carbon taxes. Never fight a battle by charging uphill. But there’s a bigger reason.

I have spent the last 10 years working on plans for alternative energy and transport for climate jobs campaigns in different countries. In the case of every idea I have ever seen for carbon taxes, there is always a better way. And that better way always cuts emissions more.

Take the French example. The yellow vests were protesting against a rise in the tax on diesel fuel. That would have led to a small fall in emissions — maybe.

Instead of putting higher taxes in place, the government could have announced that in four years’ time, all new vehicles had to fully electric. And that vehicle owners would get loans to replace their cars and trucks. And that the government would hire 10,000 workers to build a grid of electrical charging points all over the country. And give grants to encourage new electric car factories in France.

Electric vehicles powered by coal and gas-fired power plants already use about a third less emissions than vehicles that run on oil. That’s a bigger cut in emissions than a carbon tax. It’s more new jobs. And it provides the possibility in future of running all road transport on electricity from solar and wind power. That would cut almost all emissions from transport.

That’s one example. The climate jobs campaigns I have worked with provide lots of other examples. You can cut emissions by a huge amount by moving people from cars to buses. Instead of making cars more expensive, you just say that buses will have two lanes reserved for them on major roads during the rush hour. Or all day on some roads. Then public buses move much more quickly than traffic does now, and people get on the bus.

The technology is there. It costs about 20 percent more, but it saves the homeowner or renter massively on utility bills. And it makes a lot more jobs, and more satisfying jobs, for construction workers.

The whole point in carbon taxes is that they assume fossil fuels will go on being used. Otherwise why tax? Worse, they build in a perverse incentive for governments to keep fossil fuels in place to keep taxes flowing.

The climate jobs campaigns I have been involved with have faced a parallel problem. In Britain, we built a campaign with a lot of union support for a government program for a million new permanent climate jobs, most of them in renewable energy, public transport and building conversion.

At first, our campaign was split over whether these should be all public-sector jobs. Many of the environmentalists who were involved were sympathetic to small business or to cooperatives.

But one thing swung us toward public-sector jobs. We knew we had to guarantee that if anyone lost their job in an old high-carbon industry, they would be guaranteed retraining and a new permanent climate job. If we said private companies would deliver that, everyone would know that was a lie.

We want that job guarantee because those oil-tanker drivers and natural-gas workers should not be punished. They built our economy. But not just because it’s right. If we don’t do that, we will divide the union movement, divide the working class and divide the electorate.

There are lots of examples of this. In South Africa, many environmentalists supported a program where the government gave contracts to private renewable energy companies, almost all from Europe. The amount of renewable energy was a small proportion of what was needed. There were hardly any jobs for South Africans — most jobs in renewable energy are in manufacturing.

South Africa has a public-sector electricity company called ESKOM that uses mainly South African-mined coal. The government threatened to close coal mines because of the renewable-energy contracts. The main coal miners’ union and the metal workers’ union threatened to strike against renewable energy to preserve jobs in a country with 40 percent unemployment.

Many environmentalists backed the government and the European companies, because they cared about climate change, even though the contracts were only going to provide less than 10 percent of the energy South Africa needs. The climate jobs campaign in South Africa has a program for a million new jobs, almost half of them in renewable energy in the public sector, with a promise of a permanent job for every coal miner.

West Virginia is the tragic example in the U.S. The state has a prouder and stronger union tradition than any other state in the union. That’s still there, handed down from mother and father to child. We saw it again in the teachers’ strike. West Virginia is also the state that voted for Trump by the largest margin in 2016. The reason for the union strength and the Trump vote is the same: coal.

The signs are that the U.S., and much of the world, is going to go into a recession sometime in the next two years. We will need jobs. The California fires were the turning point — everyone knows about climate change now, even when they deny it. It’s real, it’s here, and it’s hot.

There’s a lot that’s up in the air now about green jobs. How we will pay for them? What jobs? Companies on contract or a Climate Corps like the New Deal?

Me, I’m for a Climate Corps. Permanent government jobs, with decent wages and benefits. Then we can say to everyone that we have a decent job for every coal miner — a job transforming the world and protecting all living things. That would carry every valley in West Virginia.