70% of all bacteria live deep in the earth, constituting a reserve of carbon and biodiversity that vastly outnumbers and outweighs all humans combined 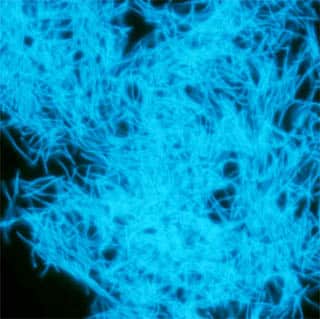 A methane-producing bacterium, found in a coal bed 2 km below the Pacific Ocean floor.

70% of all bacteria live deep in the earth, constituting a reserve of carbon and biodiversity that vastly outnumbers and outweighs all humans combined

Continuing our series on the social and scientific basis of metabolic rift theory.

In a previous article in this series, I discussed Vladimir Verdadsky’s pioneering work in identifying and defining the biosphere, the “specific, life-saturated envelope of the Earth’s crust,” comprising all living matter on Earth, and all parts of Earth where life exists, from the crust to the upper atmosphere.

In recent years, Earth System science has not only confirmed Vernadsky’s insights, but extended them, showing that the biosphere is much larger and more complex than he could have known. We now know that most of the biosphere is not readily visible, and that there is still much to learn about how it functions and may affect human life and society. Contrary to claims made by some theorists, it is patently obvious that most of the biosphere (let alone the rest of the Earth System) is not constructed by, contained in, or internal to capitalist society.

As a case in point, this week the Deep Life community of the Deep Carbon Observatory project released results of a ten-year study of organisms that live kilometers below us, in rocks once thought to be entirely devoid of life. As the following summary reveals, the inhabitants of the deep biosphere vastly outnumber and outweigh humans, and most of them are still unknown to science. The metabolic complexity of the Earth System is much greater than anyone imagined a few years ago, and any attempt to understand the web of life that ignores this will be incomplete and misleading.

This summary is adapted from materials provided by the Deep Carbon Observatory, comprising some 1200 scientists in 52 countries. The research was conducted by DCO’s Deep Life community, which “explores the evolutionary and functional diversity of Earth’s deep biosphere and its interaction with the carbon cycle.”

Barely living “zombie” bacteria and other forms of life constitute an immense amount of carbon deep within Earth’s subsurface — 245 to 385 times greater than the carbon mass of all humans on the surface.

Scientists with the Deep Carbon Observatory drilled 2.5 kilometers into the seafloor, and sampled microbes from continental mines and boreholes more than 5 km deep. With insights from hundreds of sites under the continents and seas, they have approximated the size of the deep biosphere — 2 to 2.3 billion cubic km (almost twice the volume of all oceans) — as well as the carbon mass of deep life: 15 to 23 billion tonnes (an average of at least 7.5 tonnes of carbon per cubic km subsurface).

Among many key discoveries and insights:

The total global Deep Earth biomass is approximately 15 to 23 petagrams (15 to 23 billion tonnes) of carbon.

“Ten years ago, we knew far less about the physiologies of the bacteria and microbes that dominate the subsurface biosphere,” says Karen Lloyd, University of Tennessee at Knoxville, USA. “Today, we know that, in many places, they invest most of their energy to simply maintaining their existence and little into growth, which is a fascinating way to live.

“Today too, we know that subsurface life is common. Ten years ago, we had sampled only a few sites — the kinds of places we’d expect to find life. Now, thanks to ultra-deep sampling, we know we can find them pretty much everywhere, albeit the sampling has obviously reached only an infinitesimally tiny part of the deep biosphere.”

“Our studies of deep biosphere microbes have produced much new knowledge, but also a realization and far greater appreciation of how much we have yet to learn about subsurface life,” says Rick Colwell, Oregon State University, USA. “For example, scientists do not yet know all the ways in which deep subsurface life affects surface life and vice versa. And, for now, we can only marvel at the nature of the metabolisms that allow life to survive under the extremely impoverished and forbidding conditions for life in deep Earth.”