Global temperatures are rising faster than at any time in 11,000 years

For nearly 15 years, the science deniers have tried to discredit Michael Mann’s “hockey stick” graph. New research not only shows that Mann was absolutely right, but that temperatures haven’t risen this fast since the last ice age.

Here’s the new hockey stick graph, based on data going back 11,000 years. Note the sudden uptick on the right. Global warming isn’t just real, it is accelerating fast. 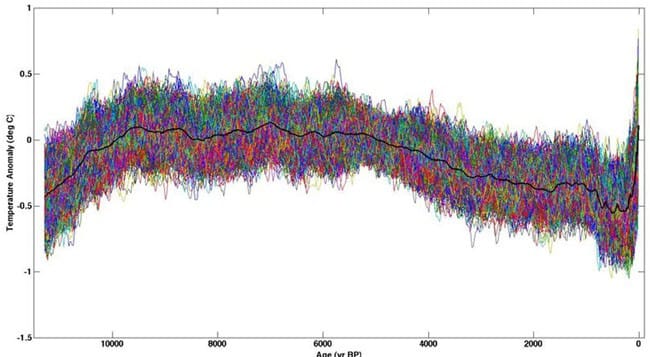 The article below, republished with permission from Gabriel Levy of People & Nature, discusses the significance of this latest disproof of denialists’ lies.

NEW PALEOCLIMATE STUDY:
PACE OF GLOBAL WARMING BEATS ANYTHING SINCE THE ICE AGE

A study of world temperature since the last Ice Age, published this month, shows we are in the midst of a dramatic U-turn: gradual cooling ended in the early 20th century and turned to relatively rapid warming.

The climate scientists who wrote the study say it provides further evidence that warming is caused mainly by carbon dioxide emissions since the industrial revolution, and not naturally.

The study, led by Shaun Marcott of Oregon State University and published in Science magazine, reconstructs temperature changes over the past 11,300 years. It is based on 73 sets of climate data, mostly built up from analysis of the fossils of pollen, plankton and other marine micro-organisms.

Previously, continuous temperature reconstructions only went back 2000 years. The most well-known of these, published in 1998 by Michael Mann of Penn State University and his colleagues, included the so-called “hockey stick” graph, showing a steady downward trend in temperature over two millennia, with a sudden spike upwards in the twentieth century.

And that’s significant because, after the Intergovernmental Panel on Climate Change (IPCC) used Mann et al’s “hockey stick” graph in their 2001 Third Assessment Report, it became the target of every demented climate denialist in the American political establishment and media.

Marcott et al’s publication (i) confirms the basic findings of the “hockey stick” research, but extends the record back from 2000 years ago to 11,300 years ago, and (ii) provides yet more proof that the denialists’ claims were bogus.

“Global temperature, therefore, has risen from near the coldest to the warmest levels of the Holocene within the past century, reversing the long-term cooling trend that began [about 5000 years ago].”

The study indicates that in the 4000 years after the end of the Ice Age, the world warmed about 1.25 degrees on average. After that there was a plateau of warm temperatures, and then a long period of cooling that went on until about 200 years ago. Then the cooling reversed, with a vengeance.

Climate scientists quoted by AP praised the methods used by Marcott and his colleagues, although they said they might be a bit too oriented to the Northern Hemisphere. Jeff Severinghaus of the Scripps Institution of Oceanography said there could have been an abrupt shift in climate about 12,000 years ago, i.e. just before the period studied by Marcott et al.

There is a useful report on the Climate Central site here. Unfortunately the article in Science magazine is subscriber-only (although remember that many libraries are subscribers). The supplementary material is open-access.

The study by Marcott and his colleagues is welcome not only as another step forward in scientific research, but also as yet another rebuttal of the pseudo-scientific, political attacks on climate science that were so intensely concentrated on the “hockey stick”.

Michael Mann, the lead author of key articles proposing the “hockey stick”, tells the grim story of the denialist campaign – and the fight back against it – in his book, The Hockey Stick and the Climate Wars: Dispatches from the Front Line (Columbia University Press, 2012), which I strongly recommend. (It’s currently going for less than 20 US dollars on Amazon).

Mann gives a lay person’s introduction to paleoclimatology, i.e. the study of “proxy records” such as tree rings, fossils and ice cores, which have enabled scientists to ascertain temperatures for thousands of years prior to the 1880s, when measurements began to be recorded. From the 1980s, paleoclimatological research deepened scientists’ understanding of long-term climate trends, enabling them to interpret current climate and make predictions about future possibilities with greater confidence.

Mann also traces the growth of climate denialism in American political culture during the 1990s, and the response to it at the highest levels of government during the George Bush administration (2000-08). He explains very clearly the distinction between scientific debate and scepticism on one hand and the battle with the denialists, whose methods undermine science.

Mann describes how climate scientists logically and repeatedly demolished the denialists’ arguments – which were usually published by non-scientists, or scientists in other fields, in journals not adhering to standard review processes. Nevertheless, the denialists’ quackery was recycled endlessly in the media. The hand of oil and coal companies, who funded – and still fund – climate-denying lobbying organisations, was never far away.

Mann points a frightful picture of the vilification of climate scientists by politicians such as Texas congressman Joe Barton, and the uncritical repetition of denialist arguments by journalists who should have known better. At the height of these “climate wars”, Mann and other climate scientists set up the Real Climate site, to explain their work to non-scientists and counter the denialist barrage in cyberspace. Bookmark it!

Reading Mann’s account made me rethink an analogy I used in a review of a book by another leading climate scientist, James Hansen. I compared Hansen’s stand against the Republican denialists with Galileo Galilei’s refusal to accede to the insistence by the Catholic church in the seventeenth century that the sun goes round the earth. But now I am thinking that that is a little unfair on Pope Urban VIII and the torturers of the Holy Inquisition.

After all, the heads of the seventeenth-century Catholic church were usually acting from profoundly-held beliefs. The idea that the sun, and all other celestial bodies, went round the earth was an essential part of the religious ideology that held together the social and political system of their times.

Present-day climate denialists usually have no such illusions of a higher calling. They act from much baser motives – often simply because their quack “research” is funded by fossil fuel industries, who are only concerned to preserve their ability to churn out profit over the very short term, whatever science says about the inevitability of a transition away from fossil fuels.

Mann reminds us in his book, and in interviews and articles on his web site here, that although the Bush presidency is over, the climate denialists are still hard at work. The peak of their efforts to undermine science was the notorious “climategate” episode in the run-up to the failed Copenhagen climate summit of 2009. Even serious newspapers gave unduly respectful coverage to this denialist witch-hunt, based on misquotations carved from a mountain of hacked emails.

A report here shows that even now, in 2013, fresh bundles of hacked emails are still being served up to the denialists.

… and the level of carbon dioxide emissions

Marcott et al’s findings arrive along with news that the increase in the level of carbon dioxide in the atmosphere in 2012 was the second-fastest on record, the New Scientist pointed out in its report.

Many climate scientists believe that CO2 levels need to plateau at 450 ppm for humanity to have a reasonable chance of avoiding dangerous global warming of two degrees centigrade or more. But others believe that the level needs to be pushed back down to 350 ppm – as does, for example, the 350.org campaign group founded by American environmentalist Bill McKibben.