Veteran socialist says ‘A Redder Shade of Green’ should be read by all who are concerned with climate change and the degradation of the environment. 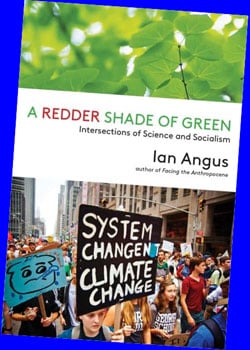 Veteran socialist says ‘A Redder Shade of Green’ should be read by all who are concerned with climate change and the degradation of the environment.

Barry Sheppard is a long-time socialist activist and writer who currently lives in the San Francisco Bay area. This review was first published in the November/December 2018 issue of Against the Current, published by the group Solidarity.

This book follows the author’s previous one, Facing the Anthropocene, also published by Monthly Review Press, in 2016. (See Michael Löwy’s review of that work.) Ian Angus is the editor of the online journal Climate & Capitalism.

“Anthropocene” refers to a new geological period, where the activities of human beings have become the dominant factor shaping the planet’s changing geology, biology and climate, including effects on humanity. Angus, and increasingly geologists, are focusing on the period beginning around 1950, when humanity’s impact, which had been developing gradually, underwent a “great acceleration” — a dialectical transformation of quantity into quality.

The levels of atmospheric carbon dioxide and methane (the “greenhouse” gases) produce rising surface temperatures, melting of the icecaps, ocean level rise and acidification. Plastic waste in the oceans, tropical forest loss, species extinctions and other indicators have ballooned, with grave implications.

This new book contains polemics, debates and articles from a Marxist perspective, dealing mainly not with the climate change deniers but with other environmentalists, scientists and socialists, who differ with each other on explanations and solutions. This includes ecosocialists — because as Angus explains, there are as many differences among them as there are differences among socialists more broadly.

The book is divided into five sections. The first is “Natural Science and the Making of Scientific Socialism,” a necessary foundation for the rest of the book and a necessary clarification among Marxists.

The second, “Responding to the Anthropocene,” responds to critics of the left and the right who are trying to delegitimize Anthropocene science and convince environmentalists ignore it.

The third, “Numbers Are Not Enough,” considers aspects of the overpopulation myth that were not covered in a previous book by Angus written together with Simon Butler, Too Many People? (Haymarket Books, 2011).

The fourth, “Saving Species, Saving Oceans” discusses that topic.The final section, “Toward an Ecological Civilization,” proposes a broad vision of the fight for a world in which the lives of future generations takes precedence over the present capitalist drive for profits.

On Science and Dialectics

I will concentrate on the book’s first section, because the issues it raises are still in dispute among Marxists. I’ll also deal with aspects of the second section which are also in dispute in the broader environmentalist movement.

“Natural Science and the making of Scientific Socialism” refutes an interrelated series of assertions. One is a philosophical contention that dialectics pertains only to human society and not to the rest of nature.

Since Engels’ unfinished book Dialectics of Nature says the opposite, a corollary of the argument is that Engels distorted Marx’s views. One proponent of these views that Angus quotes goes so far as to assert Engels’ views were responsible for “some of the more repressive features of Soviet practice.”

An even more extreme assertion by some is that “Marx was not a Marxist — that Marxism was a doctrine invented by Engels, whose scientific materialism was contrary to Marx’s liberal humanism,” Angus points out. Another assertion is that Engels was interested in natural science while Marx wasn’t.

Angus refutes these views, beginning with the last one: “New studies of Marx’s long-unavailable notebooks, now being published in the [Marx-Engels Complete Works] definitely refute claims that Marx was uninterested in the natural sciences or considered them irrelevant to his politics.”

He quotes one Marxist, Kohei Saito:

“Marx’s notebooks allow us to see clearly his interests and preoccupations before and after the publication of the first volume of Capital in 1867, and the directions he might have taken through his intensive research into disciplines such as biology, chemistry, geology, and mineralogy, much of which he was not able fully to integrate into Capital. While the grand project of Capital would remain unfinished, in the final fifteen years of his life Marx filled an enormous number of notebooks with fragments and excerpts. In fact, a third of his notebooks date to this period, and almost one-half of them deal with natural sciences. The intensity and scope of Marx’s scientific studies is astonishing.”

Angus discusses this constellation of views on nature and dialectics in two long essays, one on Marx’s and Engels’ longtime friend Carl Schorlemmer, the “Red Chemist,” a noted chemist of his time and a communist. As Angus demonstrates, they discussed over many years social and political questions — as well as chemistry and natural science.

All three were dialectical (historical) materialists who understood that all of nature, including human society, was in constant motion and development. Dialectics is the logic of motion, evolution, and how one stage can be superseded by a new and different one, in human history as well as the non-human world.

The assertion that there was a split between Marx and Engels on the dialectics of nature is a falsification, as Angus persuasively demonstrates.

The other essay in this section of Angus’ book is about Marx’s and Engels’ relation to the then new evolutionary theory of Charles Darwin. Both men were greatly appreciative of Darwin’s scientific breakthrough. Marx wrote that The Origin of Species “contains the basis in natural history of our [his and Engels’] view.”

While Darwin probably knew little of Hegel or dialectics, Angus shows that his theory of the evolution of life was in fact dialectical. It was a partial realization of what Marx wrote in his 1844 manuscripts: “History itself is a real part of natural history and of nature’s development into man. Natural science will, in time, incorporate into itself the science of man, just as the science of man will incorporate into itself natural science: there will be one science.”

In Socialism: Utopian and Scientific, Engels wrote, “Nature works dialectically and not metaphysically … she does not move in the eternal oneness of a perpetually recurring circle, but goes through a real historical evolution. In this connection, Darwin must be named before all others. He dealt the metaphysical conception of Nature the heaviest blow by his proof that all organic beings, plants, animals and man himself, are the products of a process of evolution going through millions of years.”

Another point that Angus makes is that “Marx’s research for Capital had included a careful study of Justus von Liebig’s work on agriculture chemistry, which he described as ‘more important for this matter than all the economists put together.’ [Monthly Review editor] John Bellamy Foster has shown that this research was central to the development of Marx’s concept of a ‘metabolic rift’ between capitalist society and nature.”

One need not be a fan of the particular “monopoly capital” Monthly Review school of economics (I’m not) to realize that MR and Foster in particular have taken the lead in developing Marx’s insight into a Marxist theory of the present ecological crisis, including climate change, and what must be done about it. Others, like Angus, are part of this development, which is ongoing and progressing, including with debate.

One key conclusion especially important today is that Marxists, like Marx and Engels in their time, should at least become aware of what the earth scientists are telling about the world, if not study what they are saying, if they are going to be effective in helping lead the fight against the looming environmental catastrophe.

A Redder Shade of Green goes on in the second part to refute various attacks on the core of Anthropocene science including left critics who propose the term “Capitalocene,” failing to recognize the qualitative expansion of the human impact in the recent short period of a few decades (in contrast to all of capitalist history).

Self-described “ecomodernists” profess a concern with the environment while opposing pro-environmental policies, on the grounds that capitalist development will solve all the problems, including global warming, and that environmentalists are getting in the way of such development.

These are shills for the fossil fuel industry, which every day gives us Dr. Pangloss ads on TV about how they are solving all environmental concerns. There are others who “refute” Anthro­pocene science, mainly by misrepresenting it, as Angus shows in some detail.

Some environmentalists propose various technological solutions to climate change without cutting back on the burning of fossil fuels. Some of these are dangerous and foolish, such as “geoengineering” notions to disperse in the atmosphere particles to reflect back sunlight — proposals that omit discussion of what the long-term effects on life on earth would result from such a process that cannot be reversed, effects that would be imposed on all of us worldwide.

On the left there are other proposed technological solutions. One of these is to capture carbon dioxide from the atmosphere and store it in rocks, while allowing fossil fuels to be burned indefinitely.

While chemical reactions are known to do this on a small scale, scientists (as well as some experiments along these lines that have failed) have demonstrated that this “solution” is not technologically feasible on the necessary scale to make a difference — and would even cost more than shutting down all fossil fuel burning.

We have to face the reality: the only solution is to phase out fossil fuel energy replacing it with renewable energy, while protecting displaced workers in a “just transition.” We must do this to avoid the looming catastrophe, and to do this we must begin to measure these forms of energy by their use-value to humanity, not their dollars and cents exchange value to capitalists.

Not only is the use-value of renewable energy already greater than the use value of fossil fuel energy, but the latter has become steeply negative on balance and dangerous to our continued existence.

This book should be read by all who are concerned with climate change and the degradation of the environment generally. There will be those who take issue with some or all of Angus’ views, but as he wrote in his introduction, “I look forward to receiving responses, criticisms, and disagreements,” as submissions to Climate & Capitalism  or to its Facebook page.

*I first came across the core of these views when my companion Caroline Lund and I were in Europe as the representatives of the Socialist Workers Party to the Fourth International, 1968-70. They were especially strong among the younger French comrades, who had played an outstanding role in the May-June 1968 events in France. They were influenced by the early writings of Georg Lukács in his History and Class Consciousness where he apparently rejected Engels’ view (later Lukács corrected this in his Defense of History and Class Consciousness) in an otherwise brilliant polemic against the determinism prevalent in the Second International of an automatic triumph of socialism, in contrast to the Bolsheviks’ revolutionary practice. They were also influenced by Sartre, who emphasized the “otherness” of nature to the human mind.