In ‘Climate Justice,’ grassroots activists from around the world, mostly women, tell their stories. A powerful and compassionate book. 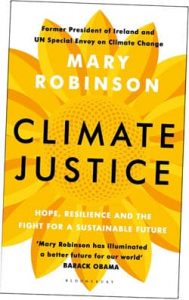 Mary Robinson is a former president of Ireland, UN Commissioner on Human Rights, and advocate for climate justice through her foundation. Her work over the last few years has been all about climate justice: showing that “the fight against climate change is fundamentally about human rights and securing justice for those suffering from its impact – vulnerable countries and communities that are the least culpable for the problem.”

This ought to be obvious, but it is obscured when climate change is thought of as an environmental issue. It is easily discussed in abstract scientific language – 350 or 400 parts per million of CO2, 1.5 vs 2 degrees. In reality, the difference between those numbers is life and death for some of the world’s most impoverished communities. If we understood climate change through its human impacts, we would have a much greater sense of urgency. As I’ve said before, history will judge us on that.

In order to explore this point, Mary Robinson does what she has done repeatedly at international climate talks: give the floor to grassroots activists. She steps into the background and lets other people tell their stories, often in their own words.

People like Constance Okollet, a Ugandan ‘climate witness.’ She saw her farm washed away, and once she had made the connection with climate change, she became an activist. She mobilized local people to help rebuild, and then to plant trees and try to mitigate the effects locally. She has spoken at climate talks, bringing a boots-on-the-ground rebuke to Western negotiators, but refusing to be a powerless victim. “Every Sunday, I travel to different parishes and speak after Mass” she says. “I stand up and tell the people that climate change has come to stay, but that we can overcome it by planting trees.”

When we think about climate change, a recurring phrase is that we should ‘do our bit’ to reduce our footprint. Others harangue environmentalists for peddling ‘green guilt.’ Both of those, a positive and a negative, imply complicity: climate change is something we’re all causing through our lifestyles. Things look very different from the perspective of a Ugandan farmer. They don’t have a car, or eat meat every day, or run a house full of appliances. For Constance, climate change is something that is done to her and her community. “It was not until I went to a meeting about climate change that I heard it was not from God, but the rich people in the West who are doing this to us.”

These direct and challenging perspectives have been brought to climate conferences and feature in NGO reports, but they don’t often reach the popular media. If there’s a debate on TV or on Radio 4, they’ll get guests in from a think tank. You rarely encounter the lived experience of climate change unless you seek it out, and yet these are the most powerful voices in the whole debate.

Each chapter in Climate Justice shares a personal story, most of them women. There’s a salon owner who lost her business to Hurricane Katrina, activists from Chad, Alaska, and a woman from the EU’s last nomadic tribe, the Saami. Each story highlights a particular aspect of climate change, such as the effects on the Arctic, small island states, or the intersection with American race politics. A union rep in Canada opens up the question of a just transition and how fossil fuel workers can be victims of climate change too. And for those wondering how they can respond, one chapter tells the story of a suburban mother reducing her ecological footprint and encouraging others to do the same.

It’s not a long book, (I read the whole thing last night while babysitting) so you’ll be able to make time for it. It’s powerful, compassionate, generous and hopeful. I found it very moving in places, which is not something I can usually report from books about climate change, and I’d recommend it.