Dr. Michael Friedman teaches biology in Antigua, and is a member of Science for the People. His article Metabolic Rift and the Human Microbiome was published in the July-August issue of Monthly Review.

The online magazine Aeon recently ran an article, titled The Earth’s Carrying Capacity for Human Life Is Not Fixed. The author, Ted Nordhaus, is executive director of the Breakthrough Institute and a prominent proponent of ecomodernism, the view that capitalist technology is capable of solving virtually any of the environmental problems generated by humankind, with eternal technical innovation making possible eternal capitalist growth. 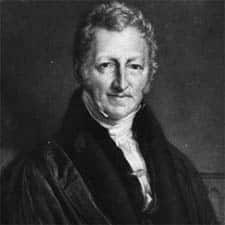 In this article, Nordhaus points to the recent resurgence of neo-Malthusian perspectives on current environmental crises: “From the 18th-century arguments of Reverend Thomas Robert Malthus onwards, prophets of environmental doom have imagined that […] like protozoa or fruit flies, we keep breeding and keep consuming until the resources that allow continuing growth are exhausted.”

He rightly criticizes this perspective: “In reality, human fertility and consumption work nothing like this. Affluence and modernisation bring falling, not rising fertility rates. As our material circumstances improve, we have fewer children, not more” — the well-known demographic transition.

He observes that this transition has led demographers to shift focus from population growth to increased consumption as the reason for environmental crises. Some environmentalists, as Nordhaus writes, assert that current consumption rates have breached or will breach the carrying capacity of our planet. He correctly responds that “this view is deeply ahistorical, assuming carrying capacity to be static.” He points to the propensity of human societies to increase productivity through the ages as the falsifier of that assumption.

“There is no particular reason to think that we won’t be able to continue to raise carrying capacity further. Nuclear and solar energy are both clearly capable of providing large quantities of energy for large numbers of people without producing much carbon emissions. Modern, intensive agricultural systems are similarly capable of meeting the dietary needs of many more people.”

Throughout his discussion Nordhaus performs a sleight of hand, conflating the current concept of “planetary boundaries” with the older carrying capacity idea:

“a team of scientists concluded that the Earth can sustain, at most, only 7 billion people at subsistence levels of consumption …. Achieving ‘high life satisfaction’ for everyone, however, would transgress the Earth’s biophysical boundaries, leading to ecological collapse.”

But the two are not the same. The “planetary boundaries” concept is not linked to any particular model of growth: it is primarily a descriptor of physical limits and tipping points for the biosphere. While many environmentalists hitch the idea of planetary boundaries to the Malthusian wagon, greater explanatory power is offered by the concept of metabolic rift, the theory that disturbances and breaks in natural cycles and flows result primarily from a dynamic intrinsic to the capitalist mode of production.

Nordhaus correctly identifies flaws in the concept of carrying capacity, but he continues with one of the principal errors of Malthusian discourse when he makes technology (and specifically capitalist technology) the lynchpin of his critique.

The carrying capacity concept is fraught with problems from an ecological point of view. As the co-author of a well-known introductory ecology textbook, Michael Begon, points out, carrying capacity is an “idealized concept not to be taken literally.”[1] Nordhaus notes that its earliest application referred to cargo space on a ship, while its first biological applications referred to livestock on a range. When applied to ecosystems, and even more, human society, it falls apart. 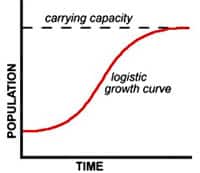 It is based on an idealized model of population growth, the logistic growth curve, under conditions of a limiting resource or resources. Under this model, growth begins slowly, goes through a rapid growth phase and then tapers off, producing an S-shaped curve. In theory, population growth follows this curve, simply determined by birth and mortality rates, and will increase until it reaches an asymptote (“K” or the carrying capacity) at the point at which resource depletion causes deaths to equal or exceed births.

Most ecologists today recognize that “K” is not a fixed value, but will vary dramatically according to numerous biotic and abiotic factors and interactions. Of course, technology plays a role as far as human societies go. But, that role is double-edged, particularly, as carrying capacity was formulated to describe resource limitations to population growth, not the nest fouling of modern societies, a result of technological application under capitalism.

The logistic growth model is also fraught with problems, as organismal populations rarely comply with its assumptions, especially that of a linear relationship between population density and the negative feedback on that density[2]. Most ecologists recognize that density-dependence is non-linear and varies during the growth of a population, the life stages of individuals, and in conjunction with interactions between organisms in an ecosystem.

The fundamental flaw both in applying the concept of carrying capacity to human society and in Nordhaus’ rejection of it, is failure to consider the role of social structure and relationships. Resource use does not accrue equally to all members of society. For example, the richest 10% of the world’s population account for about 60% of global consumption of natural resources, while the poorest 20% utilize less than 2%.[4] At the same time,  the consequences of waste, pollution and environmental disruption fall inordinately on the shoulders of poor and working people, who bear the burden of resulting toxic exposures, communicable and non-communicable diseases or climate-change-induced natural disasters. Thus both population growth and carrying capacity are very different for rich and poor.

Underlying all, there is a dynamic — capital accumulation — which is responsible for most resource use and waste, but does not derive from consumption, much less from human need, although it demands increasing levels of consumption and strives toward unending growth. As environmental writer and soil scientist Fred Magdoff asked at the recent inauguration of the new Science for the People magazine, “why must capitalists spend billions of dollars on marketing if ordinary people are prone to endlessly growing consumption?”

By way of further example, consider one of Nordhaus’ shibboleths, intensive agriculture. A large and rapidly growing portion of the world’s agricultural land is concentrated in the hands of large scale farms, particularly industrial, commodity-crop operations.[5] Their expansion into the global south has been particularly explosive during the past five decades, displacing millions of small farmers into urban slums and replacing local food crops grown in diverse systems with export crops grown in monoculture.[6] Factory farming and livestock operations have resulted in massive ecological disruption, including outbreaks of emergent diseases, soil despoliation, profligate pesticide use, loss of genetic and biodiversity, and significant production of greenhouse gases, even while agribusinesses and beholden governments destroy agricultural surpluses deemed “unmarketable” – while almost 900 million people go hungry on our planet.

Thus, it is not population growth that leads to encroachment on planetary boundaries but capital’s unquenchable and ever-expanding thirst for profits.

Which brings us to the question of technology. Nordhaus claims that technology can cope with the growing demands placed on carrying capacity or planetary boundaries. The problem is that technology is not neutral. In present-day society, it is determined, shaped, and controlled by capitalist social relations from its design through its implementation.

Technological innovation under capitalism is overwhelmingly introduced with the fundamental goal of enhancing profits and capital accumulation (as well as furthering social reproduction and propping up existing power relations). Capitalism lacks any intrinsic mechanism for regulating negative social and ecological side effects, which are deemed “externalities.” The most that can be achieved, and then only under the pressure of social movements, is limited regulation.

Technology in the hands of capital is largely responsible for generating secularly increasing ecological disruption, waste and pollution. Technological innovations under capitalism come at the cost of the environment, even while making possible certain solutions. However, the fulfillment of that potential relies on a total transformation of social relations.

This is best exemplified by the modern energy industry, in which fossil fuels continue to set the agenda, even while cleaner, alternative sources have made some gains as a result of popular pressure. As long as profits provide the basis for economic decisions, those gains will be subordinated to the bottom line and are perpetually at risk. Even when deployed, alternative sources are often imposed as a burden on the most marginalized, as dictated by bottom-line reasoning. One recent example was the creation of large-scale, privately-owned wind-farms in Puerto Rico, which came with the displacement of small farmers and replacement of agricultural land.

Nordhaus also predicts miracles from enormously capital intensive, expensive, highly centralized and irremediably hazardous nuclear power. In its risk-benefit analyses, capitalist authorities are willing to accept the possibility of a catastrophic meltdown, as occurred in Fukushima, Chernobyl or Three Mile Island. Under a different set of social relations, in which human life and well-being, and the healthy functioning of the natural cycles and flows on which we and so many other species depend were prized above profits and capital accumulation, the precautionary principle would apply to applications of such technology.

Many thanks thanks to Fred Magdoff, Siddharth Iyengar and John Vandermeer for helpful feedback on this article.

[1] Thomas Jonathan Davies. “Carrying capacity: a critique of the concept and its usefulness.” (1997).

[6] GRAIN. “Hungry for land: small farmers feed the world with less than a quarter of all farmland.”