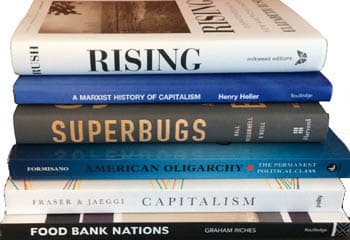 Henry Heller
A MARXIST HISTORY OF CAPITALISM
Routledge, 2018
Henry Heller’s short account shows that capitalism has always been a double-edged sword, on one hand advancing humanity, and on the other harming traditional societies and our natural environment. He makes the case that capitalism has now become self-destructive, and that our current era of neoliberalism may trigger a transition to a democratic and ecologically aware form of socialism.

William Hall, Anthony McDonnell, Jim O’Neill
SUPERBUGS: AN ARMS RACE AGAINST BACTERIA
Harvard University Press
The problem of drug resistance already kills over one million people across the world every year and has huge economic costs. Without action, this problem will become significantly worse. Superbugs outlines the major systematic failures that have led to this growing crisis, arguing for mounting an offense against this threat through agricultural policy changes, an industrial research stimulus, and other broad-scale economic and social incentives.

Elizabeth Rush
RISING: DISPATCHES FROM THE NEW AMERICAN SHORE
Milkweed Editions, 2018
We live in a time of unprecedented hurricanes and catastrophic weather events, a time when it is increasingly clear that climate change is neither imagined nor distant—and that rising seas are transforming the coastline of the United States in irrevocable ways. Rising is a lyrical meditation on vulnerability and on vulnerable communities.

Nancy Fraser, Rahel Jaeggi
CAPITALISM: A CONVERSATION IN CRITICAL THEORY
Polity Press, 2018
Two leading critical theorists show how various regimes of capitalism have relied on a series of institutional separations between economy and polity, production and social reproduction, and human and non-human nature, periodically readjusting the boundaries between these domains in response to crises and upheavals. What emerges is a renewed crisis critique of capitalism which puts our present conjuncture into broader perspective, along with sharp diagnoses of the recent resurgence of right-wing populism and what would be required of a viable Left alternative.

Graham Riches
FOOD BANK NATIONS:
POVERTY, CORPORATE CHARITY AND THE RIGHT TO FOOD
Routledge/Earthscan, 2018
In the world’s most affluent and food secure societies, why is it now publicly acceptable to feed donated surplus food, dependent on corporate food waste, to millions of hungry people? While recognizing the moral imperative to feed hungry people, this book challenges the effectiveness, sustainability and moral legitimacy of globally entrenched corporate food banking as the primary response to rich world food poverty.

Ron Formisano
AMERICAN OLIGARCHY: THE PERMANENT POLITICAL CLASS
University of Illinois Press, 2017
America is governed by an aristocracy of massive inherited wealth that is accumulating immense political power. Their shameless pursuit of wealth and self-aggrandizement, often at taxpayer expense, rewards channeling the flow of income and wealth to elites. That inequality in turn has choked off social mobility and made a joke of meritocracy, exacerbating the dangerous instability of an American democracy divided between extreme wealth and extreme poverty.