People running big corporations—indeed, those running businesses of all sizes—seek to maximize profits not because they are misguided, but because that’s their job in a capitalist economy. 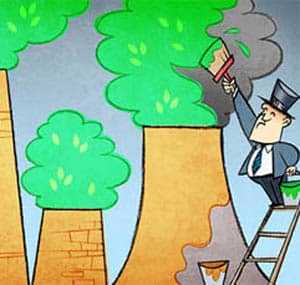 The Guardian recently published an opinion piece by its economics editor Larry Elliott, in which he argued that capitalism can rescue civilization from the global climate emergency. Here are excerpts, with me interrupting. From Elliott’s piece:

“Innovation is what capitalism is all about, and there has been staggeringly rapid progress in developing clean alternatives to coal, oil and gas. The cost of producing solar- and wind-powered electricity has collapsed. Great advances are also being made in battery technology, which is vital for the new generation of electricity-powered vehicles.”

This is an often-heard argument: that capitalist economies are going to prevent climate catastrophe because “green” technologies are becoming cheaper thanks to innovation. But all this innovation we’re seeing has only one goal, and that’s to generate profits. And while capitalist economies are able to spin off improved renewable-energy systems or energy-efficient technologies, they’re even better at producing new energy-consuming technologies and products—and those are getting cheaper, too.

Furthermore, recent analyses purporting to show that 100 percent of current and growing energy demand can someday be satisfied with renewable sources are based on bad assumptions and flawed models, but even if the “100%” vision were achievable, it would leave stranded billions of people around the world who already suffer energy poverty.

“People running big corporations see their job as maximizing profits in the short term, even if that means causing irreparable damage to the world’s ecosystem. What’s more, they think they should be free to get on with maximizing profits without any interference from politicians, even though the fight against climate change can only be won if governments show leadership, individually and collectively.”

People running big corporations—indeed, those running businesses of all sizes—seek to maximize profits not because they are misguided, but because that’s their job in a capitalist economy. The common goal of both the private and public sectors is rapid, sustained GDP growth, so the only climate actions that companies or governments are willing to take are those that will not risk slowing wealth accumulation. (When Elliott says capitalism must take risks, he doesn’t mean that kind of risk!) This is why no governments have yet taken the actions that will be necessary to steeply reduce carbon emissions.

“But normally creative destruction takes time, especially if the old guard can marshall sufficient resistance to change – something the fossil fuel industry has been adept at doing. It is vital that capitalism’s Dr Jekyll emerges victorious over its Mr Hyde. More than that, it needs to be an immediate knockout blow.”

We often see it argued or implied in the mainstream climate movement that if only we could take down the fossil-fuel companies, the pipeline builders, and the armament makers, the way would then be clear for the good side of the business world, the Jekylls, to lead us into a green future. But the only direction the Jekylls plan to lead society is toward whatever generates the most profit, whether or not it’s good for the climate (and it’s usually not).

“When times are tough, politicians are suckers for the argument that there is a trade-off between growth and greening the economy. There isn’t. Companies account for capital depreciation when they draw up their profit and loss accounts. If governments adopted the same principle and accounted for the depletion of natural capital when drawing up their national accounts, growth would be lower. In countries such as China and India – where the cities are dangerously polluted – it would be markedly lower.”

Here we come to a myth that lies at the core of the essay: the notion of “natural capital.” The great ecological economist Herman Daly has been debunking that myth for years, for example when he responded to this statement by Dieter Helm, chair of the UK Natural Capital Committee: “The environment is part of the economy and needs to be properly integrated into it so that growth opportunities will not be missed. If the Chairman of the UK Natural Capital Committee gets it exactly backwards, then probably others do too. The environment, the finite ecosphere, is the Whole and the economic subsystem is a Part—a completely dependent part. It is the economy that needs to be properly integrated into the ecosphere so that its limits on the growth of the subsystem will not be missed. Given this fundamental misconception, it is not hard to understand how other errors follow, and how some economists, imagining that the ecosphere is part of the economy, get confused about valuation of natural capital.”

“[Nicholas] Stern says technological progress has been much faster than he thought possible when his report was published in 2006, and he thinks it is quite something that all the major car-makers now accept that the era of the internal combustion engine is coming to an end. ‘But the speed of action is still far too slow,’ Stern warns. “Emissions have to be peaking now and turn down very sharply. We have not yet acted on the scale needed, even though the ingredients are there.'”

Stern is right that emissions have to be reduced “very sharply,” but for that to happen, there will have to be an immediate, declining cap on the quantities of fossil fuels being extracted and burned, decades before we have enough renewable capacity to substitute significantly for fossil energy. That will mean a steep decline in society’s overall energy consumption, and an even steeper decline in production of consumer goods and services, because a significant share of the fossil fuels still being burned will have to go to building renewable energy capacity.

So if Stern’s right that “all the major carmakers” have accepted that “the era of the internal combustion engine is coming to an end,” we’re now going to have to give them the bad news that the era of personal car, however it is powered, is going to have to come to an end. There will not be enough renewable electricity in America to satisfy an energy demand at today’s level, let alone the additional burden of 100 million or so electric vehicles. And, no, ride-hailing and autonomous cars won’t solve the problem.

“Winning the race against time requires political leadership. It means acknowledging that the Chinese model of managed and directed capitalism might be more appropriate than the Anglo-Saxon model.”

Very true that decision-making can no longer be left to the market, that economic planning will be essential. But if we look to Chinese capitalism as a practical strategy, it will indicate that we’re running out of ideas. Chinese government and business talk a good ecological game, but they also won’t take any action that might slow economic growth. Go to page 10 of this issue of CounterPunch for an interview with environmental historian Donald Worster in which he discusses the current state of China’s “greening” in historical context.

“A massive scaling up of investment in clean technology is needed, because the $300bn spent on decarbonisation worldwide last year merely matched the cost of the losses in the US from climate and weather-related events. It also means scaling up the lending of the World Bank and the regional development banks to help poorer countries build wind and solar capacity. And a global carbon tax set high enough so that fossil fuels remain in the ground must be implemented.”

A carbon tax is not even close to a panacea. It would simply be an attempt to reduce consumption indirectly by making it more costly. The tax would have to be extremely high if it is to achieve the necessarily steep emissions reduction, and that would place an insupportable burden on the world’s poor majority.

Even if some of the revenue from the tax were redistributed, everyone but the rich would suffer under shortages and inflation, while the rich could afford to maintain their accustomed lifestyles. The only fair alternative to a carbon tax—rationing—would, unlike taxes, directly reduce emissions while ensuring sufficiency for all. But it would have to apply not only to consumers. Production would have to be rationed, too.

“And, more than anything, it means accepting that the world needs to wage war against climate change. Powerful vested interests will say there is plenty of time to act, and they are aided by climate-change deniers who say there is nothing to worry about. These people need to be called out. They are not deniers, they are climate-change appeasers. And they are just as dangerously misguided as fascism’s appeasers in the 1930s.”

Some climate activists as well have been advocating a climate “war.” (Bill McKibben went so far as to write that we must “literally declare war” on climate change.) What they, and presumably Elliott, mean by “war” is that we should launch a renewable-energy buildup analogous to the rapid development of war production capacity in the 1940s. They tend to skip over the more important features of the World-War-II-era economies in the United States, the United Kingdom, and other countries: central planning of production and rationing of many essential goods.

Note how in Elliott’s formulation, the war-on-climate-change metaphor allows us to single out as climate-change appeasers a narrow slice of the capitalist world: the coal and petroleum interests and their abettors. He imagines that once those Hydes and Chamberlains are taken down, the rest of the business world can get on with saving the Earth.

But while waiting for that to happen, I wouldn’t hold my CO2 if I were you.

Stan Cox is on the editorial board of Green Social Thought, where this article was originally published. He is the author of Any Way You Slice It: The Past, Present, and Future of Rationing and co-author, with Paul Cox, of How the World Breaks: Life in Catastrophe’s Path, From the Caribbean to Siberia.