Radical science magazine returns with an important volume on climate engineering, a documentary on SftP’s history and rebirth, and a renewed commitment to activism. 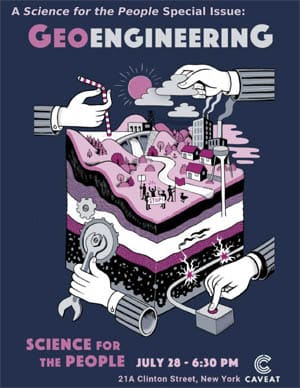 Special issue to be launched in NYC on July 28

Radical science magazine returns with an important volume on climate engineering, a documentary on SftP’s history and rebirth, and a renewed commitment to activism.

If you are a C&C reader in New York City on July 28, there is just one place to be— at Caveat (21A Clinton Street) for the launch of the first new issue of Science for the People published in almost three decades, a special issue on geoengineering.

From 1969 to 1989, Science for the People mobilized American scientists, teachers, and students to practice a socially and economically just science, rather than one that served militarism and corporate profits. Figures such as Stephen Jay Gould, Ruth Hubbard, Richard Levins and Richard Lewontin played key roles in building the activist organization. Some 100 issues of SftP’s magazine featured articles on virtually every aspect of science, from a radical perspective.

The organization was reborn at a national convention in Ann Arbor, Michigan, in February, and it is now relaunching its magazine. Articles from this special edition will also be posted on the Science for the People website beginning on July 28.

The July 28 gathering will also feature the premiere of a short documentary about SftP’s history and rebirth. Here’s a teaser:

Tickets for the July 28 launch can be purchased online here.
Admission includes a free  copy of the special issue on geoengineering.

Visit the Science for the People website for more information, and to learn how you can get involved.

SCIENCE FOR THE PEOPLE
MISSION STATEMENT

Science for the People engages in research, activism, and science communications for the betterment of society, ecological improvement, environmental protection, and to serve human needs. Members of Science for the People consist of Science, Technology, Engineering and Mathematics (STEM) workers, educators, and activists who are socially and ethically focused, and believe that science should be a positive force for humanity and the planet.

As an organization our goals include: