Statement on the second annual March for Science on Saturday, April 14, 2018. “We need to transform the role of science in our world.” 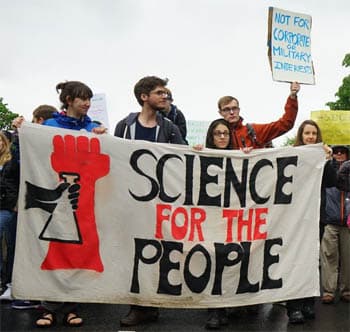 Statement by Science for the People
THE DUAL NATURE OF SCIENCE

Why do we “March for Science”? A central impulse is to fight the exercise of power for private gain at the expense of broad interest; oil companies ought not determine the quality of climate science!

However, if we generalize this impulse we risk making science into a neutral counter-power to be deployed merely through Evidence-Based Policy. But defense of science is not enough. We need to transform the role of science in our world.

Science for the People engages with what ecologist Richard Levins called the dual nature of science. That is science as “an episode in the growth of human knowledge in general, and as the class-, gender-, and culture-bound product of Euro-North American capitalism in particular.” Levins noted that two common reactions to the intersection of science and politics, scientism (the ideology that science is always correct and just) and antiscience, fail to grasp this dual nature:

Both scientism and modem antiscience are one-sided. This is not the same as “extreme,” the ultimate reproach of liberal criticism. “Extreme” implies as its preferred opposite “moderate,” a solution with the implication that the truth is a little bit of this and a little bit of that, or “not all black or white, but some shade of grey,” an optimal middle ground defined by the extremes that are rejected.”

Both scientism and antiscience fail to address the real challenges facing scientists, society, and the planet today. A few examples show that a sensitivity to the dual nature of science is the necessary backbone of our movement.

Militarism. Science tends to satisfy capitalism’s need to constantly innovate in the pursuit of profit, and as a result becomes the center of a misleading progressivist ideology. But progress for whom? More than half of American government science funding is channeled through the military. The invasion and occupation of Iraq killed over half a million Iraqis and cost $2.3 trillion. The total budget of the National Institutes of Health over the same period was about $225 billion. The US spent ten times more killing over 500,000 people than it did on research to improve healthcare!

Reproductive Justice. Science is often integrated into profoundly anti-democratic policy. Writing in Science for the People magazine in 1977, Linda Gordon noted that the birth control movement started with an emphasis on women’s liberation, but the entry of doctors and other professionals infused the movement with elitist values such as population control, often due to openly eugenicist views. The fight for reproductive justice continues today. Black women die at a rate four times higher than white women in childbirth and abortion access has been declining for decades. Our movement must not repeat these errors of technocracy and elitism, but must join broad democratic struggles.

Eugenics and Biological Determinism Too often, scientific acceptance promotes injustice. The Eugenics Movement reached mainstream scientific status in the early 20th century (with many universities hosting Eugenics Departments), justifying tens of thousands of sterilizations of black, poor, and disabled people up through the 1960s. Ideas that later are deemed reprehensible can exist as accepted science for decades; this happens even today. Eugenics is a cruder version of the general science of biological determinism–the justification of social violence and inequity through their naturalization as biologically inevitable–which is alive and well.

How should scientists organize politically?

The discrediting of biological determinism was the joint victory of the women’s movement, the Black freedom struggle, and the radical science movement. Radical scientists contributed by publicly exposing ideological motivations through careful, sustained, confrontational argument. And the fight continues. So long as structural injustices persist, so too will their naturalization, from Charles Murray’s “color-blind” notion of biological class, to James Damore’s claims that women are underrepresented in tech because they are innately inept.

Science is not an abstraction removed from society. Science is produced by our labor. But the conditions of this production and the use of science are controlled by the wealthy and powerful. We must fight for a science that serves all people, organizing wherever science is produced or applied alongside all those fighting for justice.