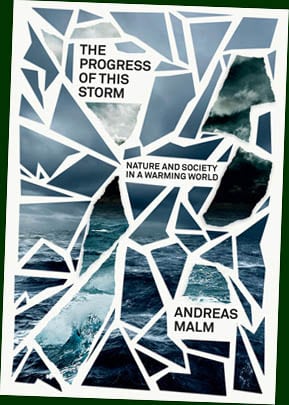 See also: A C&C reader supplements this review:
New Materialism: Idealism of the Most Useless Sort

Andreas Malm
THE PROGRESS OF THIS STORM
Nature and society in a warming world
Verso Books, 2018

Anyone who reads contemporary green literature has seen books with titles like The End of Nature, and statements such as these:

In contrast to environmentalists who want to protect nature, in some circles it has become common, even fashionable, to assert that nature no longer exists, that humans have taken over and it is impossible to distinguish between what is natural and what is social. The proponents of such views aren’t just saying that humans are part of the natural world; rather they claim that nature and society literally cannot be separated, in theory or in practice. “For better or worse,” writes Bruno Latour, “we have entered into a postnatural world.”[7]

Proponents of this viewpoint fall into three camps. Ecomodernists see the end of nature as cause for celebration. We should expand and deepen the process, to free humanity from dependence on nature and use whatever of it remains for our benefit. Others mourn the loss of nature but see no way out. Since society and nature are inseparable, only small reforms are possible. A third current says we should be hopeful and eschew catastrophism, but offers no basis for hope other than the improbable suggestion that rising environmental costs might cause capitalism to collapse before Earth’s life-support systems do.

Now Andreas Malm, who won the prestigious Deutscher Memorial Prize for his 2015 book Fossil Capital, has written a powerful essay “to scrutinize some of the theories circulating at the nature/society junction in the light of climate change.”[8] In clear and convincing prose, he shows that the “end of nature” thesis stems from deep confusion about the complex relationship between human society and the rest of nature.

Activists are often tempted to avoid philosophical discussions as a waste of our limited time, but as Malm writes, theory can help or hinder effective action. “Some theories can make the situation clearer while others might muddy it. Action remains best served by conceptual maps that mark out the colliding forces with some accuracy, not by blurry charts and foggy thinking, of which there is, as we shall see, no shortage.”[9]

His critique focuses on the related concepts of constructionism (nature is “socially constructed” by human beings) and hybridism (the social and the natural are inextricably combined, so it is impossible to distinguish between them). Both approaches are promoted in the influential work of Bruno Latour, whose devotees hail him as the most important French philosopher of our time.

Others are surprised that anyone takes Latour seriously. His contributions to “science studies” have repeatedly provoked derision from actual scientists. In one notorious case, he wrote that scientists who concluded Ramses II died of tuberculosis were wrong, because the pharaoh died thousands of years ago, while the bacteria that causes TB wasn’t discovered until 1882.[10] Apparently, the disease didn’t exist until humans constructed it!

Such foolishness characterizes his disciples’ work as well. Graham Harman, for example, writes: “We cannot say that neutrons are more real than unicorns, only that they are stronger than unicorns. After all, neutrons simply have more and better animate and inanimate allies testifying to their existence.”[11]

And Jason W. Moore, whose views Malm calls “unbridled hybridism in Marxist garb,” declares that even the most fundamental laws of physics are culturally determined: “the ‘law of entropy’ … is not determined by the biosphere in the abstract … From the standpoint of historical nature, entropy is reversible and cyclical….”[12]

A world where diseases don’t exist until someone notices them, where the laws of thermodynamics and the existence of unicorns are matters of opinion — these might be premises for one of Terry Pratchett’s Discworld fantasy novels, but not for serious consideration of society and nature. If all science is subjective, why should we accept the conclusions of climate scientists and not those of science deniers? If it is impossible to distinguish between society and the natural world, how can we possibly identify the social drivers of global warming, let alone determine what social and economic measures might slow or reverse the damage?

Sad to say, the great divide between natural science and the humanities has made room for such nonsense in academic circles. In 2007 a survey found that Latour was the 10th most frequently cited writer in the humanities, ahead of Sigmund Freud, Walter Benjamin and Karl Marx. That’s one reason why Malm’s book is so important: he strips away the nonsense that characterizes much hybridist/constructionist literature, and exposes the emptiness within, in terms that non-scientists and non-philosophers can follow. For example, regarding the oft-made claim that people’s views of nature are subjective, so objective truth doesn’t exist, he writes:

“Ten herders can draw very different portraits of the same goat, but that does not mean that the goat is a painting. If three hikers come down from a mountain with discrepant impressions — the first found it an easy trip; the second is heavily pregnant and could barely make it; the third is mostly struck by the novelty of snow — we do not thereby infer that they must have climbed three different mountains.”[13]

Elsewhere, he slams the philosophers’ penchant for “prose evacuated of meaning, a sludge dumped on the poor reader,” who may conclude that the entire subject is just too complex for ordinary folk. “It is not that such chunks of text are difficult,” he writes. “Rather, they seem devoid of propositional content almost on purpose, leading the non-initiated to ask whether these scholars really want to say something or are simply fooling around.”[14]

The Progress of This Storm would be a valuable resource if all it did was expose pretentiousness in academic environmental writing, but Malm does much more than that. His book’s greatest contribution is his debunking of the claim that nature either doesn’t exist at all or has been totally subsumed by and bundled with capitalist society. In doing this, he provides a theoretical framework for effective radical action that is must reading, not just for ecosocialists but for every serious environmental activist.

Malm’s alternative is historical materialism, which neither merges nature and society into an unbreakable unity nor views society as independent of the natural world. Human society arose within and is part of the natural world, but it has distinctive characteristics — emergent properties — that are found nowhere else in nature and that enable its uniquely constructive and destructive role.

That does not mean that humans totally dominate nature. The hybridist claim that nature is entirely bundled into society displays remarkable blindness to the natural world’s immense scale and complexity. For example, although human interference with the climate system is having catastrophic results, “it is only a minor reshuffling of grains of sand in a system whose vastness boggles the mind; all the rest is an avalanche of chain reactions, which humans do nothing to bring about. …

“Consider the fact that ice melts above 0°C. This relation — between water in its solid state and temperature — is utterly anterior and exterior to humans and what they do to one another…. [It is] an entirely natural relation, between entities in nature, with no social input whatsoever. …

“At whatever point one chooses to study global warming as a material process in the biosphere, one finds relations between things in nature …. Far from receding out of view, thousands of natural relations — between the Arctic sea ice and the jet stream, between the salinity of the water and the deep currents of the ocean, between monsoons and moisture, storm surges and sea levels, habitats and heat, drought and evapotranspiration, corals and acidity, precipitation and oscillation — define the phenomenon in all its bewildering complexity.”[15]

As this passage shows, the idea that the natural world and human society could possibly be collapsed into each other is absurd, and anyone who takes it seriously will be unable to explain what the world’s problems are, let alone how they might be solved. “If society has no properties that mark it off from the rest of the world — what we insist on calling nature — how can there possibly be such an awful amount of environmental destruction going on?”[16]

“Hybridism denies that there is anything qualitatively different between UN climate negotiations and the process of photosynthesis, but not only is there an evident difference — one constructed by humans, the other not — denial of it also whisks away the significance of the combination. For the problem of climate change is constituted precisely by how social relations combine with natural ones that are not of their making. Without the primacy of the totalities of nature, emitting CO2 and other greenhouse gases would present no problem. When humans decide whether to extract fossil fuels or not, subsidise the industry or not, slash emissions worldwide or not, they take decisions on the material bridge that connects them to all the factors of the earth system, which then pull off the consequences. If the bridge did not span two sides, the decisions would have no meaning.”[17]

It isn’t possible to present Malm’s full argument about nature and society here, but these two passages summarize his main points:

“Nature did not suddenly alter itself in the nineteenth century, and so it must have been society that did, sending forth plumes of CO2 through its antecedent. Nature is not reducible to humans, who are part of it; humans are not reducible to nature, which is part of them; it is precisely in the interstices of that unity-in-difference that something like global warming can develop. Any countermeasures will occupy the same precarious place of inception.”[18]

“Nature is real; nature and society form a unity of opposites; society is constructed; agency cannot be found in inanimate matter but may still appear among human collectives, which can potentially target the incumbent technology that embodies social power — these are some of the necessary premises for an activist theory. Rejecting hybridism and its two branches, then, is not a matter of staking out some bland third way or middle course. It is about recovering the theoretical basis for ecological militancy.”[19]

On that basis, Malm proposes ten points of climate realism as a clear and unequivocal alternative to hybridism and constructivism, and three tenets of socialist climate realism as clues to the social dynamics behind global warming. While science has sometimes been used to strengthen ruling class power, he writes, “one branch has now delivered perhaps the most damning indictment ever to their rule: it is putting the material foundations for human civilisation in peril.” As a result, “surviving the warming condition requires full alignment with cutting-edge science.”[20]

“Some on the left maintain that progressives should not stoke panic — they ought to be less ‘catastrophist’ and ‘apocalyptic’ — but if we accept the principles of climate realism and stay up to date with the science, the boot is entirely on the other foot. … Dare to feel the panic. Then choose between the two main options: commit to the most militant and unwavering opposition to this system, or sit watching as it all goes down the drain.”[21]

The Progress of This Storm is at once a devastating critique of current intellectual fads, an explanation and defense of historical materialism and metabolic rift theory as indispensable tools for understanding the global crisis, and a call for a science-based mass movement to prevent global catastrophe. It is a major contribution to ecological Marxism, and, more broadly, to the development of a climate map that shows both the direction of the storm and the paths we must take to escape it.

[4] Steven Vogel, Thinking Like a Mall: Environmental Philosophy After the End of Nature (Cambridge, MIT Press, 2015), 41

[5] Jedediah Purdy, After Nature: A Politics for the Anthropocene (Cambridge: Harvard University Press, 2015), 3

[6] Paul Wapner, Living Through the End of Nature: The Future of American Environmentalism (Cambridge: MIT Press, 2010), 134