UK climate scientists say that warming in at least one year in the next five could blow past the target set in the Paris Accord. 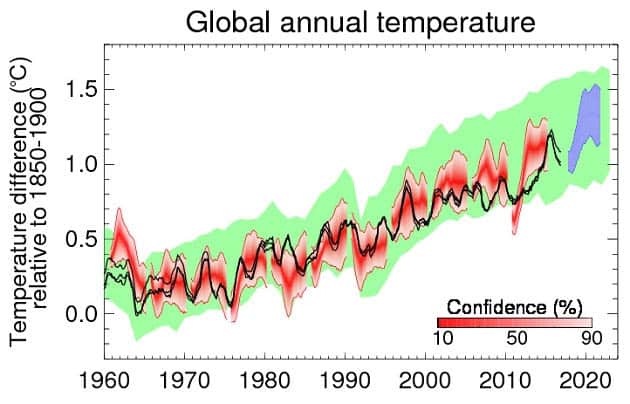 (This announcement was released on January 31 by the Met Office, the United Kingdom’s national weather and climate science service.}

A new forecast published by scientists at the Met Office indicates the annual global average temperature is likely to exceed 1°C and could reach 1.5 °C above pre-industrial levels during the next five years (2018-2022).

There is also a small (around 10%) chance that at least one year in the period could exceed 1.5 °C above pre-industrial levels (1850–1900), although it is not anticipated that it will happen this year. It is the first time that such high values have been highlighted within these forecasts.

Prof Stephen Belcher, Chief Scientist at the Met Office, said: “Given we’ve seen global average temperatures around 1°C above pre-industrial levels over the last three years, it is now possible that continued warming from greenhouse gases along with natural variability could combine so we temporarily exceed 1.5 °C in the next five years.”

The Paris agreement requires us to limit warming well below 2°C and to aim for 1.5°C. Dr. Doug Smith of the Met Office Hadley Centre said:

“We are now starting to see a small but real chance of temporarily exceeding the 1.5 °C level, but we should remember that the Paris agreement is about the global climate reaching this level over a longer-term average, rather than just a temporary excursion.”

“These predictions show that 1.5°C events are now looming over the horizon, but the global pattern of heat would be different to a more sustained exceeding of the Paris 1.5°C threshold. Early, temporary excursions above this level of warming are likely to coincide with a large El Niño event in the Pacific.”

Prof Scaife added that continued greenhouse gas emissions leading to further warming would mean that the chances of seeing years at 1.5°C or more would likely increase in future years.

The Met Office’s decadal forecast is updated each year. The forecast follows our announcement last year about the end of the slowdown, the subsequent rapid warming and the run of record global temperatures in the last few years.

The global temperatures quoted here are calculated relative to a baseline of 1850-1900 providing a measure that is relative to the pre-industrial period for comparison with the Paris ambition and target to limit warming to 1.5°C and well below 2°C respectively above pre-industrial levels.

Later this year the Inter-governmental Panel on Climate Change (IPCC) will publish a special report about the risks of exceeding the 1.5 °C warming level and what might be done to avoid it.