Neoliberal policies boost profits for corporate fishing, encourage overfishing, and squeeze out small fishers whose communities have fished for generations 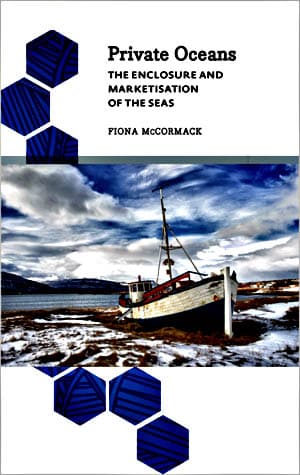 Neoliberal policies boost profits for corporate fishing, encourage overfishing, and squeeze out small fishers whose communities have fished for generations

Fiona McCormack
PRIVATE OCEANS
The enclosure and marketisation of the seas
Pluto Press, 2017

Neoliberalism, the restructuring of global capitalism that has taken place since the 1970s, has made commercial fishing vastly more profitable for corporations and large boat owners. Fish and ordinary fishers have fared much worse. Our oceans face overfishing, habitat destruction, pollution and a biodiversity crisis driven by warming water linked to climate change, while government policies exclude thousands of ordinary people from commercial fishing. Private Oceans: The enclosure and marketisation of the seas, examines the effects of one of the main causes of this exclusion, Individual Transferable Quotas (ITQs), pioneered in the 1980s in New Zealand fisheries, and further developed in Iceland through the 1990’s and now an intrinsic part of the Common Fisheries Policies (CFP) of the European Union.

Fiona McCormack, a Senior Lecturer at University of Waikato in New Zealand, argues that this process has privatised oceans and can be understood by what Marxist geographer, David Harvey calls accumulation by dispossession. She examines how ITQs work in New Zealand and Iceland and considers Hawaii where ITQs have not yet dislodged a fisheries management system based on maximum annual catches. The book ends in Ireland with examples of the effects of the Common Fisheries Policies from Donegal and the island of Árainn Mhór. Private Oceans is full of fascinating detail and the voices of the fishers at the sharp end of neoliberal restructuring.

Individual Transferable Quotas were designed to develop the profitability of fishing and first allocated to boats or companies on the basis of catch levels in the years just before the introduction. It was said that these companies would be able to invest and develop state of the art trawlers and fishing systems to maximise efficiency. Inevitably small companies and boats could not compete but they were able to sell their right to fish. McCormack argues that it was only in the face of protest from the communities who lost out that the defence of ITQs shifted to claims that it was a necessary process to save fish stocks. So the process favoured those with access to capital, while “sustainability” became a stick to beat excluded small fishers and petty traders whose communities have fished for generations.

Maori have known about dispossession or theft of their access to land and natural resources for over 300 years but the solutions are highly contested. McCormack describes in detail how Maori struggle for reparations has led to valuable settlements for tribal groups that accept the government’s terms. Using this capital and on behalf of their iwi, separate tribal communities, a layer of Maori business people have been able to build enormously valuable companies by leasing quotas and investing in the seafood processing industry and infrastructure.

“Commercial fishing for most Maori … is largely synonymous with receiving annual dividends from quota investments. These dividends flow to marae [Maori institutions] rather than to individuals, and only to those marae whose members have agreed to the terms of the settlement. For many Maori fishers, whose expertise is generationally validated and whose identification with a particular seascape is ancestral, there is a profound sense of exclusion. This disaffection is ongoing, influences livelihood and identity practices and manifests itself in the outmigration of young people from coastal communities.”

Some Maori have become rich and are criticised by other Maori for securing access to capital and promoting their own ideology to protect their position. McCormack agrees that there are sharp and growing inequalities between different sections of Maori society but she doesn’t want to criticize this elite as a capitalist class. She argues that they are trapped by the system. But these people have also agreed to the government’s terms, including that settlement money must flow to tribal institutions, which means that urban Maori are largely excluded from the benefits of any such reparations. And it is the ruling elite’s relationship to the means of production — quotas, fishing boats, infrastructure and capital that they control and in some cases own, which really determines their class position.

When McCormack argues that privatization of the oceans is “accumulation by dispossession” it reflects a misunderstanding of the role of workers, including fishers in creating profit so she looks to other ways to mitigate the effects of capitalism rather than the self-activity of workers. This argument matters because where the source of profits lie determines how capitalism can be challenged. As profits depend on people’s work, then workers ability to withdraw labour gives them enormous power. They can force capitalists to concede reforms in the short-term and potentially challenge capitalism itself.

In the section on Iceland, McCormack shows how ITQs have become tradable commodities and how it can be more profitable to trade virtual fish than catch and sell real fish. ITQs have also been consolidated in substantial companies that exclude smaller boats and villages. Erlingur Sveinn Haraldsson and Örn Snævar Sveinsson tried to fight this process by going out in their small boat in 2001 and deliberately flouting the 1990 Icelandic Fisheries Management Act. They said that their actions were “ethically justifiable and in defence of equal rights to access the commons.” The Act states that the commercial fish stocks along Iceland’s coasts are “the commonwealth of the Icelandic nation and the allocation of fishing rights would not be the property rights or irrevocable custody of individual parties over fishing.” This did not save the men from being found guilty. In 2008 the UN’s Human Rights Committee agreed that the men had been discriminated against but, as McCormack says, it is only a non-legally binding moral victory.

McCormack sees an alternative model in the highly prized obligations of the Hawaiian “gift” system as part of “host culture” and argues that it could be a way to mitigate the effects of neoliberalism. For example, a fisher will sell some of his catch but will share a substantial portion with his extended family. In return he will receive other foods, beer, or his child may receive a lift to another island for sporting events. This is clearly a deeply valued system of mutual support but it would hardly work in a global economy of seven billion people when these are the very bonds that capitalism has smashed up almost everywhere.

Protests connected to fishing demands have succeeded in Britain and Iceland, but usually when those involved have a clear sense of their social weight as part of the working class. Without this power, the movement for reparations or higher wages, is likely to be captured as it has been in New Zealand by people with different interests.

It is unsurprising that McCormack does not see class and workers as centrally important to fighting capitalism when we are in a period of historically low levels of resistance with workers at its core. But we have to understand this potential, for example, in Iceland from November 2016 to February 2017 trawler workers and marine engineers went on strike for better terms and conditions. Otherwise we will be left to appealing to courts and hoping that traditions of respect and mutual sustenance will mitigate the brutalities of capitalism.

Private Oceans suffers from language that may make it less accessible to non-academics,  but there is fascinating material here and it is a very useful addition to the recent crop of anthropological work on the development fishing under neoliberalism.