Technologies that promise a quick fix to the climate crisis actually pose high risks to people, ecosystems and security, and are dangerous distractions from the urgent need for deep emission cuts. 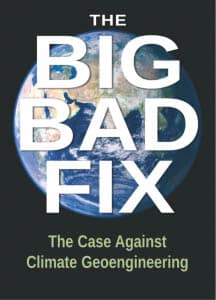 Technologies that promise easy solutions to the climate crisis actually pose high risks to people, ecosystems and security, and are dangerous distractions from the urgent need for deep emission cuts.

A new report warns that geoengineering, the large-scale manipulation of the climate, is gaining acceptance as a would-be technological fix for climate change in key emitting countries, as these countries refuse to break away from their fossil-fuelled economies.

Geoengineering research programs and projects planned by industry and state-funded and private research institutions are proliferating, primarily in high-emitting countries such as the US, the UK and China. The Big Bad Fix analyses the context and risks of geoengineering, and reveals the actors, vested interests and political developments underway to advance the large-scale technological schemes to manipulate the Earth’s natural systems.

Although considered reckless and unacceptable by many scientific and political experts, geoengineering is now increasingly being pushed into the mainstream of climate policy debates, where it creates the illusion of a technological shortcut to manage the symptoms of climate change without addressing its root causes.

However, as the report details, geoengineering poses many risks for people, ecosystems and security. It relies on excessive land, water and resource consumption, threatens food security, and undermines democratic control over the world’s commons because its untested technologies are also developed by patent-holders for profit.

Therefore, the report states, irreversible harm to biodiversity and ecosystem integrity is highly probable. There are also serious concerns about geoengineering governance, including the potential for unilateral deployment, the risk of conflict in the event of adverse regional impacts and side effects, and the risk of weaponization of geoengineering technologies.

Rachel Smolker, Co-director of Biofuelwatch: “Geoengineering is a dangerous defence of the failed status quo, not a technical or scientific necessity. In fact, the technologies put forward for geoengineering will most likely worsen rather than solve the multifaceted problems created by climate change. Claiming that we ‘must’ deploy geoengineering is saying that we would sooner do irreparable harm to our planet than alter our economic system that benefits only the very few at the top.”

The Big Bad Fix was launched in Nairobi during the 3rd United Nations Environmental Assembly and in the run-up to a meeting of the United Nations Convention on Biological Diversity (CBD) in Montreal. Geoengineering is subject to a de facto moratorium under the CBD, and marine geoengineering is prohibited by the London Protocol of the London Convention on the Prevention of Marine Pollution. The authors of the report argue that these decisions must be upheld and must be the starting point of any legitimate, international and democratic discussion of geoengineering governance.

Silvia Ribeiro, Latin America Director of ETC Group: “Geoengineering would exacerbate the global power imbalance, creating winners and losers. It would be foolish to allow a group of countries to take control of the global thermostat. Governance must not be mistaken to mean establishing regulations to legalize and permit the development of such technologies. Banning exceedingly risky and dangerous technologies is a legitimate and prudent approach to governance, as put in practice with the Nuclear Test Ban Treaty and the UN’s adoption of a Treaty on the Prohibition of Nuclear Weapons in July 2017.”

Instead of resorting to unproven, risky techno-fixes, the report calls for the rapid implementation of a climate-just vision for limiting global warming to under 1.5°C.

Barbara Unmüßig, Director of the Heinrich Böll Foundation: “Proponents of geoengineering are feeding the illusion that we can escape our climate crises without having to adjust our emission-heavy lifestyles. But reality is not that simple. Not only do geoengineering technologies come with new risks and side effects, they also distract from the only proven solution for climate change: a radical reduction of climate changing emissions. Before geoengineering is put into action, we need clear and binding regulations for these technologies. An international framework of regulation must be grounded in the precautionary principle, and technologies with associated risks that are not predictable, justifiable or manageable must be prohibited outright.”

The report concludes that the numerous high-impact risks of geoengineering, and the political, social, cultural, economic, ethical, moral, intergenerational and rights-based problems it implies, render geoengineering unacceptable. Further, the authors argue that it is a dangerous distraction from the urgent need to support viable alternatives: making deep emission cuts in the near-term and rapidly transforming our economies to allow for a socially and ecologically sustainable and just future, rather than locking the world into a long-term dependence on non-existent, high-risk technologies.

(Adapted from an announcement by Biofuelwatch)