What will happen after the destruction caused by Harvey and Irma? The experience of New Orleans after Katrina shows what to expect when capitalists profit from disaster.

What will happen after the destruction caused by Harvey and Irma? The experience of New Orleans after Katrina shows what to expect when capitalists profit from disaster.

This article first appeared in  Jacobin in 2015, and is published here with the author’s permission. 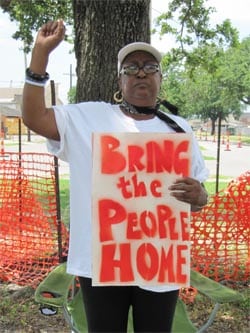 It’s one of those ironies that New Orleanians tend to especially appreciate. Today, on the tenth anniversary of the failure of the federally maintained levees, the keynote speaker at the annual Rising Tide Conference on the Future of New Orleans will be DeRay Mckesson.

Presumably, Mckesson’s invite was the result of his impressive work publicizing Black Lives Matters issues and protests across the country in the past year. But before McKesson became an activist in that movement, he was a standard-bearer for Teach For America and the New Teacher Project — education “reform” organizations that played a crucial role in aiding and abetting the destruction of New Orleans’ black middle class and propagating a pedagogical philosophy that apes the worst of culture of poverty rhetoric.

But it’s worth stepping back to consider whether such ironies are truly ironic, or rather just symptomatic of a larger condition that has plagued New Orleans — and the rest of the nation — over the past decade.

Since the levee failures, New Orleans has been ground zero for what on its face looks like a diverse cohort seeking to use the Katrina-produced “blank slate” as a canvas on which to enact their vision of twenty-first century reform. Black and white, gay and straight, wealthy and riddled with student debt, seventh-generation New Orleanian and recent Brooklyn-migrant, Republican and anarchist — little to nothing at the level of what the cultural studies aficionados might call positionality unites them.

Dig deeper though, and they share certain commonalities, commonalities integral to the only positionality that matters in the context of Katrina’s devastation and the resulting ten years of dislocation and upward redistribution of wealth: their political commitments and actions.

Indeed, what appears to be a motley group with every conceivable background and ascriptive subjectivity is, upon closer inspection, a class. It is a class well past the point of consolidation and one whose prerogatives have indelibly shaped the city’s rebuilding — dictating for whom New Orleans has and has not been rebuilt, all the while postulating and profiting from an ahistorical construction of authenticity, organic community, and ascriptive affinity as the basis for representation.

Mckesson is a particularly interesting case because he crystallizes these issues so well. One may ask how a dogged determination to end police violence against African-Americans can be reconciled with a vision of education reform that cares nothing for questions of structural political economy, school funding, or the control of teachers over their classrooms, and instead supposes that the problem is that not enough teachers come from elite Northeastern colleges and universities; too many of them are old, lethargic, and evidently devoid of that pinnacle of neoclassical economics, “human capital”; and that poor students need to be cured of their Moynihan-style tangle of pathologies.

The answer of course, is that they are not incompatible at all.

A deep and abiding commitment to dismantling a heavily militarized criminal-justice infrastructure does not necessitate that the committed individual oppose a national attack on democratic control over schools, the devaluation of teachers and their labor, an emphasis on market choice as a solution to structural inequality and disinvestment, or a base-level assumption that poverty and inequality are the results of damaged psyches and behavioral traits supposedly endemic to poor communities.

Instead, Mckesson’s appearance in New Orleans is a perfect encapsulation of the city’s last ten years. The “grand experiment” perpetrated on New Orleans teachers, students, and schools has always been done in the language of social justice, antiracism, and multiculturalism.

So has the broader grand experiment of the “new” New Orleans. New Orleans has not just been reconceived and reimagined — it has been rebuilt to serve and further specific material and ideological interests. It is a city increasingly designed not to produce equality but to give opportunity to the “worthy” while driving out as many “unworthy” as possible. (The exception of course being those needed to staff the low-wage hospitality and service industry, along with those whose labors produce the city’s appeal as something timeless and supposedly outside the market and the profit motive — an appeal that is one of market culture’s most valuable commodities in contemporary capitalism.)

Any serious reckoning with the last ten years must start with the following facts about post-Katrina New Orleans.

Approximately 100,000 people, mostly African-American, have not returned to the city. Real-estate values have doubled, tripled, and even quadrupled in some neighborhoods; rents have more than doubled in many neighborhoods; and the city’s public housing, well-built and largely unaffected by the floodwaters, has been turned over to private developers and razed in favor of mixed-income complexes designed to eliminate the supposed pathologies of the poor while making developers a handsome profit. Meanwhile, countless publicly owned properties have been gifted to high-end, well-connected developers for a song.

Wages have stagnated to the point where the city is the second most unequal in the nation. Public transportation is even more nonexistent than before the flood (no small feat).

Much-touted education “reform” has proven unsuccessful even when judged by its proponents’ favored metric, high-stakes standardized tests, and has both incentivized schools to give up on the city’s most disadvantaged children and produced a generation of New Orleanians educated with the sole purpose of passing a standardized test. Effected through the mass firing of veteran African-American teachers, the decimation of the traditional public school system also eviscerated the city’s black middle class. And finally, the removal of education policy from democratic control placed it in the hands of a variety of corporate-backed organizations.

University of New Orleans — a once-proud public university that regularly educated between 15,000 and 17,000 largely working-class students a year and produced cutting-edge research across various fields of human inquiry — has been so hollowed out that the very question of its continued existence is a cruel parlor game played every year by faculty and a student body cut nearly in half.

Of the $6.4 billion that was to be distributed by the private infrastructure consultancy firm ICF International to help homeowners rebuild, only $1.5 made it to residents. Meanwhile, ICF’s stock price has almost tripled. The money that did reach residents was doled out in a manner reminiscent of redlining, increasing capital in the hands of the wealthiest New Orleans property owners — disproportionately white — while decreasing it in the hands of the poorest —disproportionately black. Not a cent was allocated at any level for renters to return, nor were any rental market controls put in place to aid in their homecoming.

The Avondale Shipyards, which paid middle-income wages and was formerly the region’s largest private employer, unceremoniously closed its doors in 2013 after suffering a slow and hardly noticed death.

A perfectly functional hospital that was an important symbol of local identity and provided the city with a strong tradition of low-income and indigent care wasn’t reopened after the storm. Yet the city bulldozed a relatively unflooded, working-class neighborhood and spent $1.1 billion to build a shiny new hospital on the promise that it would attract high-income employees from out of state — whose income would, they insisted, trickle down.

Louisiana continues to lead the nation in incarcerated residents, the majority of who do their time in for-profit prisons. New Orleans has effectively criminalized homelessness even while its percentage of homeless residents has risen to the second highest in the nation. The list could go on and on.

The political and social divisions that exist within the city are not simply red herrings that obscure the causes of this growing dislocation. The divisions themselves are the legitimating agents of this inequality.

To put it bluntly, New Orleans has become a tremendously profitable model city for global capital. Yet the lines of debate within the city virtually never break down along the question of who stands to make money and who stands to be further disenfranchised.

Equally as problematic, the grand experiment itself has furthered the ideological hegemony of this expropriation well beyond the confines of Orleans Parish. Countless self-identified liberals, progressives, and social justice advocates around the country and the world tout the city as the exemplar for education reform, film tax incentives, the development of a cultural economy, corporate-backed non-profit solutions to social problems, entrepreneurial culture, and such revolutionary developments as locally produced food, DIY art projects, and resistance through performance and consumer culture.

It is in this manner that New Orleans’ new ruling class has come to govern with absolute hegemony.

Homages to culture and culture-bearers; neighborhood and cultural preservation as end-goals; emphases on proportional racial representation, whether on the city council or in victimhood at the hands of terroristic police; social entrepreneurship, the notion of “doing well by doing good,” and “social justice” outsourced to corporate-backed nonprofits; advocacy of urban amenities like bike lanes and locally sourced food markets; even taking down white supremacist monuments and renaming streets bearing the name of treasonous insurrectionists — all of this is perfectly compatible with the dislocations and expropriations of the last decade.

Indeed, these gestures are not simply compatible with the status quo, but serve to refract dissent and contentious politics into questions of subjectivity and identity that in fact provide a bulwark for the prerogatives of New Orleans as a city increasingly divided between those who it has been purposely rebuilt for and those who it has manifestly attempted to exclude.

More than anywhere else in the last ten years of American history, New Orleans exemplifies how equality and justice become functions of equitable distribution along lines of race, city nativity, gender, etc. — rather than evils to be defeated in and of themselves.

All have played, and love to play, the game where justice and equality are defined along the lines of representationality, diversity, and multiculturalism.

It’s an easy and profitable game for them to play. Far too often, though, it’s also an easy game for the rest of us to play. We proclaim ourselves resilient. We speak of a rebirth. We glorify resistance through the market. We proclaim our culture and neighborhoods transhistoric and emphasize imagined forms of authenticity. We celebrate groups disconnected from conceivable institutional power mechanisms demanding equitable representation.

Our politics — in New Orleans and all across nation — becomes about morality tales of injustice based on subject position, racial representation, or authentic embeddedness in some imagined organic community. It fails to recognize the cause of these injustices — the profit motive and a dire lack of institutional means to curtail it. And at the end of the day, it reinforces the rules of a game that at best allows for a more equitable distribution of inequality.

Thomas Jessen Adams is a lecturer in history and American studies at the University of Sydney. He is the author of “New Orleans as Subject: Beyond Authenticity and Exceptionalism,” forthcoming from Duke University Press. This article first appeared in  Jacobin in 2015, and is published here with the author’s permission.