Martin Empson says The Shock of the Anthropocene is a interesting account of the global environmental crisis, but it fails to offer to offer any alternative to the current system 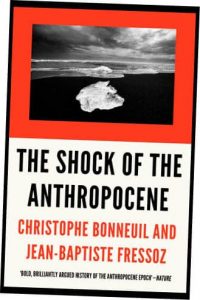 THE SHOCK OF THE ANTHROPOCENE
The Earth, History and Us
by Christophe Bonneuil and Jean-Baptiste Fressoz
Translated by David Fernbach
Verso, 2017

I found The Shock of the Anthropocene a very interesting book that has a lot to say about the multiple environmental crises that we are currently facing. But simultaneously I was left deeply unsatisfied by it, in particular its critique of the Marxist approach to the Anthropocene, and its lack of a clear strategy for solving the problem. That said, it has a lot to offer the careful reader.

It begins, like all writing on the environment must, by setting out precisely how bad the contemporary ecological crises are. Human society, the authors argue, is transforming the environment in a way that is utterly detrimental our ability to continue to live in the way we do. The authors argue that human’s are not separate from nature, but part of it, and have transformed global ecology fundamentally. For instance, they point out that “Ninety per cent of photosynthesis on Earth occurs in ‘anthropogenic biomes’, that is, ecological ensembles modified by human beings.”

It is with this approach that the authors begin their critique of contemporary Anthropocene science. They argue that discussion of the Anthropocene, reflects a “contemporary ideology of an ecological modernisation and a ‘green economy’ that internalizes in markets and policies the values of the ‘services’ supplied by nature.” They are scathing about the inability of this market driven approach to the natural world to deal with ecological crisis, pointing out that “the International Union for Conservation of Nature now presents nature as ‘the largest company on Earth’.”

Much of the early part of the book is a useful discussion of how this approach to nature developed. It is, in part, rooted in a enlightenment view of humanity sat neatly above a natural world ready and ripe for exploitation. But it is, for these authors, a result of the way that the modern economy was shaped by the interests of the Cold War, and particularly the United States.

They show how after World War Two, the concepts of ecosystems and machines, games theory and complex systems theory were used to try and break down the “Cartesian analystic reductionism” that had characterised scientific approaches to nature previously. Here they critique one famous guru of this approach James Lovelock, showing that his ideas arose out of the intellectual cradle of the US imperialist machine:

Lovelock…was in reality a pure product of the scientific-military-industrial complex of the Cold War. After collaborating with NASA, he worked for the CIA during the Vietnam War on detecting human presence under forest cover. His post-democratic conception of planetary government, his apology for nuclear power and his systemic view of the planet as a self-regulated system are the legacy of a world-view born from the Second World War and the Cold War.

The Cold War, the authors argue, shaped a way of viewing the world as a “natural world … completely enclosed in a man-made container” (the quote is from Marshall McLuhan) and as a result, arrives at a position where, the “dominant narrative of the Anthropocene presents an abstract humanity uniformly involved … uniformly to blame”.  Further, the authors argue that

The grand narrative of the Anthropocene places anthropos, humanity, into two categories: on the one hand, the uninformed mass of the world population, who have become a geological agent without realising it, and on the other, a small elite of scientists who reveal the dramatic and uncertain future of the planet.

Counter to this, the authors offer an alternative explanation of the origin of the Anthropocene, rooted in the particular developmental path taken by capitalism which has placed fossil fuels at its core. The authors quote Andreas Malm’s work on several occasions, and their analysis, particularly of the post-Second World War Great Acceleration is similar to that taken by other authors such as Ian Angus.

However, Angus’ own study of Anthropocene science and scientists shows that actually scientists do not by and large accept a narrative of all humans are “uniformly to blame” nor do they believe that the mass of humanity is uniformed or unconcerned about the environment. So the authors attempt to set their own work up as an alternative to the flawed approach of the scientists (and other environmental thinkers) is based on an incorrect reading of the scientific material.

My final criticism of the book is that the approach explicitly rejects Marxism as not being applicable to understanding the current dynamics of capitalism. The authors argue that the driving force of capitalism is consumption, and not accumulation. Which means that they lose vital analytical tools to explain the current inability of capitalism to respond to the climate crisis. They rightly understand that the Second World War was the “decisive break” that meant energy use leapt forward, but they highlight this only to emphasis that it laid the basis for “mass-consumption society”.

Mass consumption is, of course, a major issue for the environmental impact of modern capitalism. But it isn’t the cause. The cause is the drive to maximise profits, which in turn is based on the need to constantly expand production. So, the authors can reject “the great universals of ‘capital’ or the ‘human species’,” without seeing that Marx offered an analysis that put these in their historical context. Turning to Systems Theory, the authors hope that they can find a new way to understand the “ecologized history of capitalism”. Unfortunately this leaves them unable to offer any alternative to the current system.

An example of their flaws is their discussion of militarism and the environment. For instance when they argue that “The ‘scorched earth’ practices of the nineteenth and twentieth centuries… the Boer War, the second Sino-Japanese War.. the German Operation Alberich of 1917… Stalin’s destruction of Soviet resources (etc) should be analysed as environmental phenomena.” The problem is that these are imperialist phenomena, which, given the nature of capitalism, inevitably has an environmental consequence – the two are dialectically linked, and its a mistake to separate them. In fact, separating them out means the authors commit precisely the reductionist error that they complain about others making.

This is a harsh critique of Bonneuil and Fressoz’s book, so it is worth noting that I found much of interest in its pages. I was, for instance, fascinated by their material on the role of the military machine in shaping a particular approach to the environment, as is the parallel discussion of the importance of the rise of the motor car. Originally published in France the book inevitably has material from that country’s environmental and industrial history that is new to me, and shows a close parallel to the historical developments of the UK.

In conclusion then, while the authors’ approach is flawed by their simplistic critique of Marxism and their lack of clarity on the approach of Anthropocene scientists, there is material of interest here. However I’d recommend potential readers read Ian Angus’ Facing the Anthropocene and Andreas Malm’s Fossil Capitalism first, to better appreciate the context.