Martin Empson reviews an important book for activists, a frightening examination of the impact of industrial agriculture on the environment, and particularly biodiversity. 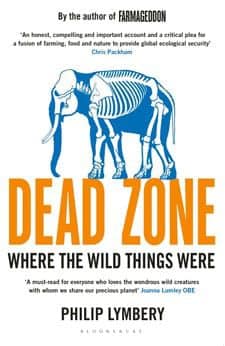 Martin Empson reviews an important book for activists,  a frightening examination of the impact of industrial agriculture on the environment, and particularly biodiversity.

DEAD ZONE:
Where the Wild Things Were
by Philip Lymbery
Bloomsbury Publishing, 2017

Philip Lymbery’s Dead Zone is a highly readable, if frightening, examination of the impact of industrial agriculture on the environment, and particularly biodiversity. Lymbery’s style is part travel-book, part autobiography and part ecological critique. There’s a lot in it, and this review cannot hope to highlight all of the fascinating content—my copy is covered in pencil markings just from a single read.But I want to try and explore what Lymbery rightly highlights as a major ecological crisis, and add a few additional thoughts.

The first thing to note is the breadth of Lymbery’s coverage. From the impact of palm plantations on elephants in Asia, to the decline of Barn Owls, Nightingales and other birds in the UK, to the dead zones in the Mexican Gulf and the way that the European Union’s Common Agricultural Policy has decimated Eastern European farming, this is a bleak picture.

One of the themes of Lymbery’s book is that industrial farming is offered as a solution to “feeding the hungry” yet what it does in practice is to cause wider environmental destruction through highly technological, mono-cultural agriculture. The impact of this is enormous, not just on biodiversity but also on human health and climate change. A major aspect of the problem for Lymbery, is that meat production (whether its beef or chicken) is concentrated in factory farms, and while this uses smaller spaces, it requires food to be grown for the animals. Discussing palm oil, Lymbery explains:

“The worry is that palm kernel helps drive more factory farming; as a readily available feed source, it tempts farmers to take animals off grass and into confinement feeding. It’s a particular concern in relation to cattle, for which a greater proportion of the diet can be made up of palm that for other types of livestock … we have a vicious circle. The increasing availability of palm-kernel meal as feed drives industrial animal farming. In turn, factory farming drives demand for more cheap feed like palm kernel. Vast tracts of land are being lost to monocultures producing fodder for animals, rather than food for people.”

Industrial farming like this requires vast quantities of pesticides and fertiliser, which in turn has as a knock on effect causing further pollution and a major impact on bio-diversity.

Lymbery is a keen bird-watcher based in the UK, so some of the most emotive chapters are those that look at the way bird life has declined in the country as a result of the increase use of chemicals. The over-reliance on chemicals leads to pollution of water-ways and, in the case of the many areas of ocean, huge dead-zones devoid of life. But sometimes the smaller scale impact is as shocking – Lymbery notes that the once prevalent water vole has declined to a “staggering” extent of 90 per cent in the last forty years a loss on a par with the black rhino in East Africa. Similar stories about creatures as varied as jaguars, penguins and butterflies come throughout the book.

The impact of agriculture on biodiversity has also decimated bee populations. In his first book, Farmageddon, Lymbery noted the way that bees are central to farming, and hence to human society. He also highlighted how they were now the subject of a massive industry that moved them around the United States to pollinate crops, and how the chemical heavy agriculture threatened them with extinction. Here he notes that it is possible to move away from such methods and quickly allow bees and other animals to return, even within the confines of the current system.

In fact, one of the strengths of Lymbery’s book is that it argues that agriculture can feed the world easily and doesn’t have to be done on the basis of highly industrialised practices.

“we already produce enough food for twice the human population today: more than enough for everyone both now and in the foreseeable future. The trouble is that much of it is wasted.”

“The suggestion that increased production will safeguard future generations from the hunger and malnutrition that already ravages parts of the world seems highly questionable. Particularly when hunger today is primarily a result of distributional problems, yet is relentlessly trotted out by food producers and policymakers who have too many vested interests, or simply don’t ask if the suggestion bears scrutiny.”

This is important. There is a narrative within sections of the environmental movement that the only way to feed the world is for individuals to switch to meat free, or vegan diets. I’ve argued elsewhere that this is based on mis-understanding the science and the economic system. Lymbery argues that we should eat less, but better meat and he also notes that just because food is vegan, doesn’t make it good for the environment. Maize, for instance, is particularly blamed for pollution and is a ‘needy crop, requiring relatively high inputs of pesticides and fertilizers. During heavy rain, water runs off the surface… causing rivers to become polluted and at greater risk of flooding.” Once again, Lymbery notes how different farming practices can help solve these problems.

Lymbery has some good examples from both the developed, and the developing world, of how alternative agriculture can reduce the appalling impact that modern farming has on the environment. In the context of current debates about Brexit, he also notes the way that bodies such as the European Union institutionalise the move towards high-intensity farming. In fact, one of the most powerful sections when he looks at how Poland’s agriculture has been transformed. Since entry into the EU it has changed from a more sustainable model to a neo-liberal system with huge impacts on the environment, higher prices, worsening animal welfare and big changes to rural communities. He recounts one story of how, during negotiations for Poland’s entry into the EU one negotiator declared that “old-fashioned Polish farms would need to modernise so that they could compete on the global market… To do this it will be necessary to shift around one million farmers off the land.” As one Polish farmer explains to Lymbery “Now the best Polish food is illegal.”

Such examinations of the modern food system provide important ammunition to those fighting for a sustainable agriculture that can feed the world. But I don’t think Lymbery goes far enough in his critique. For instance, I don’t think he quite gets across how a few tiny multinationals hold the agricultural system in their control. That’s not to say that Lymbery doesn’t get the scale of the problem, he notes at one point “a steady stream of soya trucks passing along the road … Sadly it will take more than the indomitable spirit of tribal warriors to stop the spread of Brazil’s soya juggernaut.”

But in the face of examples like this, to argue that “though our food choices three times a day, we can support the best animal welfare and bring landscapes to life” is an inadequate response.

As I said, many of Lymbery’s examples of how farming has been turned back into a more sustainable practice are inspiring. But as I read them, I was struck that they seemed to be the consequence of enlightened individuals. What was lacking was any strategy to force change upon the multinationals and big-Agriculture.

The problem is the structure of farming under capitalism. People go hungry because they cannot afford to buy food, and because it is not profitable to feed those with no money. That’s the system that needs to be broken and progressive movements will have to incorporate a new vision for agriculture into its struggles in order to do this. In part mean arguing for the type of changes that Lymbery has so eloquently explained in the face of the enormous environmental tragedy that he highlights. But it will also mean a radical struggle by those producers and workers in the fields and the factories to wrest power from the corporations.

Together with his earlier book Farmageddon, Dead Zone is an important read for activists. I’ve highlighted what I see as some weaknesses, but I don’t hesitate to recommend it to people wanting to learn more about capitalist farming and how its helping to lay the basis for global environmental crisis.