Long-time ecosocialist activist and writer Terry Townsend is fighting his way back from a massive stroke. You can help ensure that he can participate in political activity again. 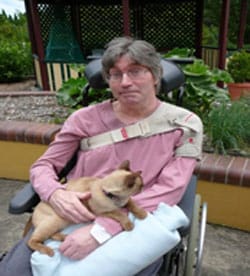 Long-time ecosocialist activist and writer Terry Townsend needs our help. As the letter below explains, he is fighting his way back from a massive brain hemorrhage that left him in a coma for four weeks, in intensive care for seven, and in hospital and a nursing home for over a year. He has come a long way, and with our help, he can become active again.

If you are in Australia, you probably know Terry as an indefatigable activist and educator who has made major contributions to ecosocialist organization and theory. He was a founder of and regular contributor to Green Left Weekly, the world’s leading red-green newspaper, and a leader of the Socialist Alliance. You might know him as Norm Dixon, a pen name he sometimes used.

Thanks to the Internet, Terry has had an impact far beyond Australia. I first met him through the Green Left discussion group, which he moderated fairly and firmly. He strongly supported Climate & Capitalism from the beginning: we’ve published a number of articles by him, and many more that he recommended.

Until his stroke, he was editor of Links International Journal of Socialist Renewal, a unique web-based forum that promotes open and constructive dialogue between active socialists from different political traditions from all over the world. Thanks to Terry and Links, many C&C articles have reached thousands of people beyond our regular readers.

When I wrote Facing the Anthropocene, I couldn’t think of a better way to explain how a socialist society would reverse capitalist ecocide than by including a passage from one of his talks. I’m publishing the full text of that talk on Climate & Capitalism today: it’s a fine example of Terry’s ability to explain complex ideas in a clear and accessible way.

Terry has devoted his life to the global ecosocialist movement — and now it’s time for us to help him continue. Your contribution can help ensure that he isn’t confined to his home for the rest of his life.

The letter below is from Terry’s life companion, Lisa Macdonald, who will be providing the full-time care Terry needs. She explains what happened to Terry and why he needs financial help now. The amount they need is not huge, but it will make a huge difference in his life.

For information on how to contribute to Terry’s mobility fund, email townsend[dot]terry[at]gmail.com. 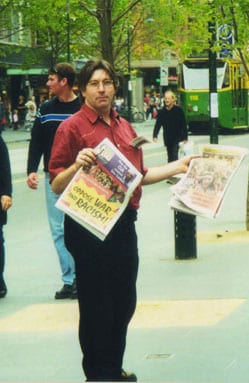 A sight well-known (and much missed) by Blue Mountains locals

January 18 letter from Lisa Macdonald, published with her permission.

After a 16-month battle to survive and then begin the recovery from a “catastrophic” (the medical term) brain hemorrhage in August 2015, former Links journal editor Terry Townsend is at last able to move out of the nursing home he’s been living in for the last 12 months to live in his own home again.

Now he needs your help to ensure that he’s not confined to home for the rest of his life, can reconnect with comrades and friends, and participate in political activities again. If you might be able to help, please read on.

On August 28, 2015, Terry’s life was ripped out from under him when a malformed artery in the right side of his brain ruptured, causing a massive bleed that lasted for six hours before he was found unconscious by his partner, Lisa, and helicoptered to Nepean Hospital for life-saving surgery.

Terry never knew he had the AVM [arteriovenous malformation] since birth — it was a time-bomb waiting to go off. He was fit and healthy, working full-time at Fischer Library at Sydney University, and very active in progressive politics in Australia and internationally, mainly through editing the Links journal website he loved and distributing Green Left Weekly, the newspaper he helped to produce and wrote for (aka Norm Dixon) for 25 years — especially articles on the environment, Aboriginal struggles and the people’s movements in Africa, along with many music reviews under the name Buster Southerly.

Terry joined the left movement when he was 16 years old and is a founding member of the Socialist Alliance. Trying to make sense of the cruel blow dealt to him, Terry points out that as a socialist he already knew life is unfair for the majority of people, but now his lifelong struggle for freedom, justice and happiness for all people is also a very personal battle for a decent quality of life for himself.

After four weeks in a coma, seven weeks in intensive care and then four more months in hospital, Terry has made amazing progress in the last year. Despite being completely paralyzed down his left side, Terry’s determination (he attributes this to being a “stubborn old goat”), alongside his dry sense of humor which gives him courage to deal with the inevitable depression, has enabled him to progress from being unable to speak, swallow or move his body at all, to now being able to talk, read, balance himself in his wheelchair and, just recently, to stand up with assistance.

Terry is doing physiotherapy three times a week and is working hard to prove those doctors who said he’d never be independently mobile wrong. Terry standing on Katoomba Street with Green Left Weekly in hand every Saturday morning, come rain, snow or sunshine, is a sight well-known (and much missed) by Blue Mountains locals – one that Terry aims to make happen again, albeit in his wheelchair.

How Terry needs your help

Terry has just received a National Disability Insurance Scheme package that provides equipment and some nursing assistance each day to allow him to live at home with Lisa, who will be the full-time carer. We hope that by the end of March Terry will be living at home, back in front of his computer and engaged with the “real world” again.

One thing the NDIS will not assist with — and where your help will make a huge difference for Terry — is the cost of obtaining a vehicle that can be modified to take Terry’s wheelchair. Because he must sit  in a special, “tilt-in-space” wheelchair to remain safely upright, he cannot travel in a normal car seat. This means it will be difficult for him to attend medical appointments or other activities, or just get out from behind four walls, without a modified vehicle, which would be driven by Lisa. There are only two wheelchair taxis in the Blue Mountains and they are often unavailable for bookings, as well as being very expensive to use.

The NDIS will contribute towards the cost of converting a vehicle (if it’s less than three years old) to take a wheelchair, but the second-hand cost of the three types of vehicles that can be converted for Terry’s type of wheelchair is around $35,000. So, after selling our car and using Terry’s (tiny) superannuation, we need to raise around $25,000.

This informal fund appeal avoids the fees charged by crowdfunding sites, but relies on word of mouth online. So, if you are happy to forward it to others who might like to know about this, that would be much appreciated.

If you can help, please email townsend[dot]terry[at]gmail.com and I will let you know how to contribute.

We are extremely grateful for all and any contributions to help Terry regain some independence. Thank you so much for your solidarity, caring and support.