Social and environmental problems are aptly diagnosed in George Monbiot’s new book and, more importantly, they are diagnosed with great flair and eloquence. 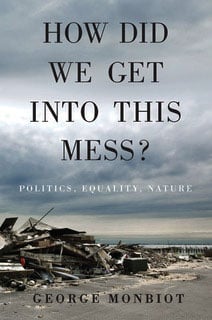 HOW DID WE GET INTO THIS MESS?
Politics, equality, nature
by George Monbiot
Verso Books, 2016

(This review was first published in the British newspaper Weekly Worker, under a Creative Commons Attribution-NonCommercial 4.0 International License.)

Is it just me, or is disagreeing with someone way more fun than agreeing with them? Admittedly, it is quite nice to create a mini-echo chamber with someone and vent all your frustrations to an enthusiastic reception of vigorous nodding and “Oh my gosh, I totally agree with you!” I took great pleasure in doing this on the morning after the European Union referendum, after all.

But it can also become dull very quickly, and all that head-nodding gets tiring. The best conversations, whether they concern political philosophy or Gigi Hadid’s hair, are the ones in which intense disagreements are battled out to the death, occasionally with accompanying cries of incredulity (“Blonde looks so much more natural! How could you say that?”), one or two buzzwords and the effect of making all parties involved question their views.

This is what made me excited about the prospect of reviewing How did we get into this mess? Although I did not recall many of Monbiot’s columns for The Guardian, I assumed that I would have a good few disagreements, since the modes of analysis and proposed solutions of those on the centre-left and far left often diverge quite a bit, even though the two are on the same side of the political spectrum. But, for the most part, social and environmental problems are aptly diagnosed in this book and, more importantly, they are diagnosed with great flair and eloquence.

Compilations of past magazine or newspaper articles are generally not my cup of tea, yet this one is a smart, snappy and stylish anthology, well put together and concisely, perceptively argued. Indeed, I spent more time envying Monbiot’s writing style — often quite reminiscent of Orwell’s non-fiction — than being critical of anything, mostly because the compiled articles generally discussed problems rather than solutions, and were more focused on the social and environmental spheres than explicitly on political economy (although the subject matters were highly diverse). When they did stray into solutions, however, there were a few more problems.

The book has a noble mission: “identifying and challenging power … discovering its failings and proposing alternatives,” (p6) because “without countervailing voices, a better world can never materialize.” (p5) Monbiot argues that, since neoliberalism has become “so pervasive … that we seldom even recognize it as an ideology,” (p3) our system is a mystery even to those who participate in it and is therefore “in poor political health.” (p5) A recurring theme in this anthology is the idea that the corporate press and corporate-funded think tanks are blocking out and paving over any criticism of the existing order. Pro-market think tanks, whose “proposals often look like a prescription for corporate power,” allow “the demands of big business and the very rich [to be] projected into policy-making,” (p213) while “a good deal of reporting looks almost indistinguishable from corporate press releases” (p223) and the sky-high prices of academic journals caused by the rentier capitalism which publishing companies practice are causing “a tax on education, a stifling of the public mind.” (p196)

This is all very true, and the desire to combat and criticize this sort of bias in print is admirable. But in order to do justice to this immense task every last speck and fleck of ruling class ideological indoctrination must be thoroughly dusted off, which — while it is accomplished to some extent in this book — is never easy.

The first chapter in particular is an insightful criticism of individualism, noting that “loneliness is twice as deadly as obesity” (p10), and “our most cutting insult is ‘loser’,” (p11) due to the mindless competition and rat-racing which characterizes current society; so even the rich are not happy, and because we have fallen victim to “a compulsive, atomizing, joyless hedonism, in which, having consumed all else, we start to prey upon ourselves” (p13) (and this is where some part of me thinks “omg #writinggoals”). Monbiot states: “We do not start with equal opportunities” (p15) and yet we are conditioned to think that a perfect meritocracy exists, where we “blame ourselves for our failures,” (p17) have “faith that if we try hard enough, we could join the elite” (p19) and are subjected to constant “comparison, evaluation and quantification” (p17) from a young age. This idea of what is aptly termed “atomization without individuation” (p24) — destroying people’s enjoyment of life, forcing them to try to find happiness through passive consumption and thus also destroying the natural world — runs throughout the anthology, and is perhaps its most powerful and universal criticism.

There are several more pieces of sharp analysis. I particularly enjoyed the dissection of the oft-invoked ‘traditional family’ concept: an “invention of the Victorians” (p60) and “an example of the age-old custom of first idealizing and then sanctifying one’s own culture.” (p61) Some ideas were even slightly Marxist-sounding: the “soul-suckers” (p52) dragging graduates into “pointless and destructive jobs” (p48) represent a textbook case of alienation, and it is acknowledged that to the Westminster government, the (excellent) idea of estates being “built for and by those who would live there … probably sounds like communism.” (p46) The politicians who “scatter bombs like fairy dust” (p245) and expect them to solve everything are harshly and rightly criticized, as are the ‘Malthusians’, who blame “the problems of the rural poor not on structural factors, but on immorality, improvidence and low productivity.” (p181)

A compelling case is made for the “powerful intrinsic reasons for defending the natural world,” (p87) based on its beauty and richness rather than its economic value or the dangers of greenhouse gas emissions, and I regret that I do not really know enough about matters relating to ecology and agriculture to discuss the topic fully here.

Although the prose remains elegant and convincing, the analysis becomes a little patchier when attention is turned to economics. From the outset, the general criticism made in How did we get into this mess? does not center on a specific decision, event, power structure, or even a broader material phenomenon like a set of social relations. It centers on an ideology: ‘neoliberalism.’ This term has become so semantically controversial, ubiquitous and meaningless that one may as well replace it with ‘pepperoni’, but is used in this book to refer to programs of decreased government intervention in the economy and the governmental philosophy behind them.

It is argued that “neoliberalism, if unchecked, will catalyze crisis after crisis” (p221), which is visibly true to an extent, given that “the upper 0.1% has already regained the position it held at the beginning of the 1920s,” (p218) social mobility is very low and inequality has been shown to increase crime rates (and high crime rates arguably indicate poor social health in general). Not to mention the damage to public services and the effects of excessive freedom for corporations, demonstrated quite neatly by the global financial crisis. But the proclamation that “all of [this] can be solved only by the means it forbids: greater intervention on the part of the state,” (p221) that there is no way to ensure that the right skills are rewarded apart from “robust government intervention,” (p184) casts the state in a disproportionately positive and uncritical light. Excessive state intervention can be just as destructive as excessive deregulation.

Before I start sounding like a closet capitalist, let me explain. The very “stagflation, strikes and budgetary breakdown” which “allowed Margaret Thatcher … to come to the rescue” (p220) and thus made ‘neoliberalism’ appealing was caused by the state getting too big for its boots. Inflation-spurring price and incomes policy, reckless overspending, the bureaucracy and inefficiency of nationalised companies in a market system — these are the perfect ingredients for a first-class crisis of the sort which brought the British economy to its knees in the 1970s. Economic interventionism can produce short-term benefits, as can unleashing competition and private enterprise. But neither of these momentary solutions will fight the susceptibility to crises, the discrepancy between effort/utility and reward, the environmental destruction and constant war, which are inevitable side effects of the slowly rotting capitalist system. Changing our governmental philosophy and basing it around being “empathetic and kind” (p289) will make no difference. Only changing our actual mode of production and breaking free from the fetters of the capitalist economic paradigm will have a lasting, tangible effect.

It is tempting to look around at all the aforementioned carnage, the wars, the inequality and the environmental wreckage, and opine that the solution is a return to nature — to retreat, not to expand, and to protect the natural world and young people from the corrupting influence of adult humans and their “linearity, control and management.” (p92) This outlook is just as limiting as the capitalist economic paradigm. Not all growth is of the same sign. The fact that our productive capacity is currently used to “extract, manufacture and store things we don’t need” (p178) does not mean that any growth which ever occurs has to be used to this end, especially not if it becomes more efficient, in any meaningful sense of the word — ie, better at satisfying human need at a lower cost. Nor does education which does not involve spending time among nature (perhaps I am biased here, as a proud, 14-year-old urbanite) necessarily mean being “confined to the classroom, stuffed with rules and facts [and] dragooned into tests.” (p41)

Despite many valid points and beautiful writing (no, I will not stop going on about that), the degree to which the critique fails to deal with the dichotomies of capitalism and its abstract treatment of society’s flaws holds it back. Instead of ‘value’-driven (which usually means ‘bombast-driven’) politics and Victorian-style hankering for the ‘return’ to a state which never existed, we need to smash paradigms and crush platitudes, and strive to create a completely new system which does not clamp down on growth for the sake of nature, but re-imagines efficiency and embraces meaningful growth.