The annual State of the Climate report confirms that 2015 surpassed 2014 as the warmest year ever recorded. Greenhouse gases, surface temperatures and global sea levels all passed previous highs. 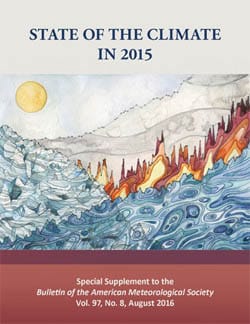 The annual State of the Climate report confirms that 2015 surpassed 2014 as the warmest year ever recorded. Greenhouse gases, surface temperatures and global sea levels all passed previous highs.

The report, prepared by the U.S. National Oceanic and Atmospheric Administration (NOAA), is based on contributions from more than 450 scientists from 62 countries around the world, and published as a supplement to the Bulletin of the American Meteorological Society. This is the 26th annual edition.

Announcing State of the Climate in 2015, the NOAA listed these “notable findings” about 2015 —

The authors of the report prepared this summary:

In 2015, the dominant greenhouse gases released into Earth’s atmosphere—carbon dioxide, methane, and nitrous oxide—all continued to reach new high levels. At Mauna Loa, Hawaii, the annual CO2 concentration increased by a record 3.1 ppm, exceeding 400 ppm for the first time on record. The 2015 global CO2 average neared this threshold, at 399.4 ppm. Additionally, one of the strongest El Niño events since at least 1950 developed in spring 2015 and continued to evolve through the year. The phenomenon was far-reaching, impacting many regions across the globe and affecting most aspects of the climate system.

Owing to the combination of El Niño and a long-term upward trend, Earth observed record warmth for the second consecutive year, with the 2015 annual global surface temperature surpassing the previous record by more than 0.1°C and exceeding the average for the mid- to late 19th century—commonly considered representative of preindustrial conditions—by more than 1°C for the first time. Above Earth’s surface, lower troposphere temperatures were near-record high.

Across land surfaces, record to near-record warmth was reported across every inhabited continent. Twelve countries, including Russia and China, reported record high annual temperatures. In June, one of the most severe heat waves since 1980 affected Karachi, Pakistan, claiming over 1000 lives. On 27 October, Vredendal, South Africa, reached 48.4°C, a new global high temperature record for this month.

In the Arctic, the 2015 land surface temperature was 1.2°C above the 1981–2010 average, tying 2007 and 2011 for the highest annual temperature and representing a 2.8°C increase since the record began in 1900. Increasing temperatures have led to decreasing Arctic sea ice extent and thickness. On 25 February 2015, the lowest maximum sea ice extent in the 37-year satellite record was observed, 7% below the 1981–2010 average. Mean sea surface temperatures across the Arctic Ocean during August in ice-free regions, representative of Arctic Ocean summer anomalies, ranged from ~0°C to 8°C above average.

As a consequence of sea ice retreat and warming oceans, vast walrus herds in the Pacific Arctic are hauling out on land rather than on sea ice, raising concern about the energetics of females and young animals. Increasing temperatures in the Barents Sea are linked to a community-wide shift in fish populations: boreal communities are now farther north, and long-standing Arctic species have been almost pushed out of the area.

Above average sea surface temperatures are not confined to the Arctic. Sea surface temperature for 2015 was record high at the global scale; however, the North Atlantic southeast of Greenland remained colder than average and colder than 2014. Global annual ocean heat content and mean sea level also reached new record highs. The Greenland Ice Sheet, with the capacity to contribute ~7 m to sea level rise, experienced melting over more than 50% of its surface for the first time since the record melt of 2012.

Other aspects of the cryosphere were remarkable. Alpine glacier retreat continued, and preliminary data indicate that 2015 is the 36th consecutive year of negative annual mass balance. Across the Northern Hemisphere, late-spring snow cover extent continued its trend of decline, with June the second lowest in the 49-year satellite record. Below the surface, record high temperatures at 20-m depth were measured at all permafrost observatories on the North Slope of Alaska, increasing by up to 0.66°C decade–1 since 2000.

In the Antarctic, surface pressure and temperatures were lower than the 1981–2010 average for most of the year, consistent with the primarily positive southern annular mode, which saw a record high index value of +4.92 in February. Antarctic sea ice extent and area had large intra-annual variability, with a shift from record high levels in May to record low levels in August. Springtime ozone depletion resulted in one of the largest and most persistent Antarctic ozone holes observed since the 1990s.

Closer to the equator, 101 named tropical storms were observed in 2015, well above the 1981–2010 average of 82. The eastern/central Pacific had 26 named storms, the most since 1992. The western north Pacific and north and south Indian Ocean basins also saw high activity. Globally, eight tropical cyclones reached the Saffir–Simpson Category 5 intensity level.

Overlaying a general increase in the hydrologic cycle, the strong El Niño enhanced precipitation variability around the world. An above-normal rainy season led to major floods in Paraguay, Bolivia, and southern Brazil.

In May, the United States recorded its all-time wettest month in its 121-year national record. Denmark and Norway reported their second and third wettest year on record, respectively, but globally soil moisture was below average, terrestrial groundwater storage was the lowest in the 14-year record, and areas in “severe” drought rose from 8% in 2014 to 14% in 2015.

Drought conditions prevailed across many Caribbean island nations, Colombia, Venezuela, and northeast Brazil for most of the year. Several South Pacific countries also experienced drought. Lack of rainfall across Ethiopia led to its worst drought in decades and affected millions of people, while prolonged drought in South Africa severely affected agricultural production.

The full State of the Climate in 2015 report can be downloaded here.