In the present planetary epoch, the concept of sustainable human development, as a way of conceiving of socialism, represents Marx’s most valuable legacy. No other ecological analysis has such breadth and power. 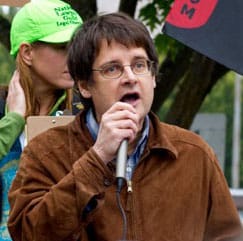 John Bellamy Foster is editor of Monthly Review. His most recent book, written with Paul Burkett, is Marx and the Earth: An Anti-Critique (Brill, 2016). The French magazine La Revue du Projet asked him to reply to three questions on ecology and Marxism.

La Revue du Projet: To what extent do you think one can reduce the position of Marx to a “Promethean attitude.” Why is this accusation still there given the  numerous texts he wrote, not only in his works of youth but also in the Capital,  about the exploitation and the slavery of nature under capitalism and the reduction of nature to a medium under “the reign of merchandise”?

JBF: The claim that Marx’s approach to nature was a Promethean one is rarely heard now in the English-speaking world because the criticism was so thoroughly refuted by scholars such as Paul Burkett, myself, and Walt Sheasby as to no longer be supportable. The criticism of “Prometheanism” was directed only at Marx and was in many ways a way of attributing metaphorically to Marx views that were extremely difficult, if not impossible, to establish by means of his texts themselves.

Marx had in his youth praised Prometheus, had himself been compared to Prometheus, and was known to frequently reread Aeschylus’s Prometheus Bound. All of this was used to suggest that Marx was Promethean in the contemporary sense of believing in extreme industrialization as an end in itself.

Things take on a different appearance, however, if one looks at the Promethean myth itself and Marx’s relation to it. Marx wrote his dissertation on the ancient Greek materialist philosopher, Epicurus, whom he greatly admired. In the foreword to his dissertation and in The German Ideology Marx compared Epicurus to Prometheus, calling him “the true radical Enlightener of antiquity.”

Here Marx was influenced by Epicurus’s follower, the great Roman didactic poet, Lucretius, who, writing centuries after Epicurus, had himself presented Epicurus as the bringer of light, based on the Promethean myth. It was probably rooted in Lucretius’s treatment here that the term Enlightenment later emerged in Europe in the works of Voltaire and others (according to Peter Gay in his studies of the Enlightenment).

The point is that the Promethean myth of the giving of fire to humankind was originally interpreted as the giving of light or knowledge. And this is how Marx viewed it. It was only later that it came to be seen as the giving of power, viewing fire as the basis of engines, and associated with industrialization. Naturally, it would have been very odd if the ancient Greeks had used the term in that way.

Not understanding the complex history of the Promethean myth and how it was transformed over time, later thinkers grabbed on to it ahistorically as meaning the praise of industrialization as the beginning-and-end-all of modern society—as if this could be traced to Marx’s response to Aeschylus or Epicurus. (Epicurus was so far from Promethean in today’s sense, that, as Marx said, he believed humanity should treat the world as its friend.)

The upshot of all of this, though, was that Marx was absurdly characterized as a believer in extreme industrialization and the unlimited conquest of nature simply because of what he had said about Prometheus in the context of ancient Greek philosophy!

Marx and Engels’s praise of the bourgeoisie in his panegyric at the beginning of The Communist Manifesto, for example, was just a lead into the critique that followed—not only the famous class critique, but also including ecological components, such as the need to transcend the division between town and country. And when this was understood the apparent contradiction between Marx’s strong ecological arguments and his alleged Promethean disappeared.

Moreover, Marx himself challenged the use of the Prometheus myth in today’s more contemporary sense of the promotion of a godlike industrialization, in his critique of Proudhon, who was one of the first to introduce the notion of Prometheanism in this sense into socialist discussions.

La Revue du Projet: You have made several times a point about the existence of Soviet ecological thought. How would you characterize it?

JBF: I have written about Soviet ecological thought over the years primarily in terms of its early period, in the 1920s, when the Soviet Union had the most advanced ecological thought in the world, with thinkers like Vernadsky, Alexei Pavlov, Vavilov, Oparin, Stanchinskii, Hessen, etc.—not to mention Bukharin, who played a key role in this regard. But much of this was obliterated in the purges that followed with major figures (including Bukharin,  Hessen, Stanchinskii, and Vavilov) executed or dying in prison in the Stalin period.

Like most Marxists in the West I thought at first that was basically the end of the story.

Recently, though, in work with Paul Burkett resulting in our new book Marx and the Earth (Brill, 2016), and in an article that I wrote in June 2015 in Monthly Review entitled “Late Soviet Ecology and the Planetary Crisis,” I ended up exploring the later development of Soviet ecology. Although the purges and the Lysenko controversy damaged Soviet ecology it continued to develop phenomenally in certain areas. Dialectical analysis, as the late Richard Levins noted, continued below the surface.

The mistake Western Marxists have made is to see the U.S.S.R. as monolithic, while in actual fact there were struggles going on within the system. A key figure was the brilliant botanist Nickiolaevich Sukachev, who Lenin had praised, and who probably did more than anyone to resist and oust Lysenko. Sukachev introduced the concept of biogeocoenosis, which was a more comprehensive concept related to ecosystem, understood as connected to biogeochemical cycles and the biosphere in the Vernadsky tradition.

In the period of late Soviet ecology, after Stalin, there were enormously creative developments. The Soviet Union had the largest conservation organization in the world, led by scientists. The Soviets developed the most advanced climatology in the world and were the first to raise the alarm about accelerated global warming, following Mikhail Budyko’s work on  the albedo feedback. It was Budyko in 1961 who first pointed to what he called the inevitable anthropogenic global warming under business as usual. He was to go on to pioneer in biospheric or global ecology and paleoclimatic research.

Climatologist E. K. Fedorov, who was influenced by Barry Commoner in the United States, was a member of the Presidium of the U.S.S.R. and argued that there should be a shift from fossil fuels and from nuclear power to solar, wind, and tidal power. As we know, the Soviet ecological scientists and conservationists were not listened to in this respect—or not nearly to the degree they should have been. But the growth of Soviet environmentalism, under the leadership of scientists, including members of the party was an important historical phenomenon, and the debates were real.

In the 1970s and ‘80s Marxian philosophy in the Soviet Union began to revive under the leadership of Ivan Frolov, and rediscovered some of Marx’s key ecological premises—associated with the concept of metabolism—ahead of Marxists in the West.

La Revue du Projet: What do you think should belong, in broad outlines in a renewed Marxist approach of ecology?

JBF: This is a huge question and therefore difficult to answer. I would argue that such a renewal should be built on the foundations of Marx’s dialectical analysis of what he called “the universal metabolism of nature,” the “social metabolism” and the metabolic “rift.”

It was based on this dialectical sequence that Marx developed the most radical notion of sustainability ever developed, in his famous statement in volume 3 of Capital, where he stated that no one, not all the people in the world, owned the earth, but that they needed to maintain it for future generations as “good heads of the household.”

Marx saw the social metabolism as the labor process itself. He defined socialism as the rational regulation by the associated producers of this metabolism between humanity and the earth, and in such a way as to enhance human development while conserving energy and maintaining the earth. Marx’s understanding of ecological crisis encompassed not only increasing ecological costs that could impact the economy, but also, more importantly, ecological crisis proper through his theory of metabolic rift, i.e. the disruption and degradation of the earth, outside the value calculus of capital.

He thus was a true ecologist, and did not see these questions merely through the lens of capital. He described anthropogenic climate change in the form of desertification as an “unconscious socialist tendency,” i.e., it was a contradiction so at odds with capitalism and civilization that only a socialist society could solve it, through the creation of a society of sustainable human development.

Standing in the way of Western Marxist understanding of the ecological problem is the fact that Western Marxism as a distinct philosophical tradition was based primarily on the rejection of the dialectics of nature—a concept that was commonly associated with Soviet Marxism, and with Engels rather than Marx.

Hence, the dialectic, in the Western Marxist, view was seen as applicable only to society and not to nature. Science was viewed as mechanistic and positivistic almost by definition. This is the major reason why Western Marxist philosophers have done so badly when turning to the ecological question. Left thinkers like Badiou and Žižek even refer to “ecology” as “the new opium of the masses.”

Only insofar as the question of the dialectics of nature and society are again taken up, as in classical Marxism, can progress be made in this area. But this requires the healing (or transcendence) of Cold War divisions within the left.

In recent years, Brett Clark, Hannah Holleman, and I have explored Marx’s discussion of unequal ecological exchange or ecological imperialism in his treatment of the nineteenth century guano trade, and his explanation of how Ireland was being forced, in effect, to export its soil, to England. This is a crucial element of our understanding of the globalized unequal ecological exchange today, and the North-South division.

All of these are ideas on which we should build today. But the most important aspect of Marx’s analysis in this respect—what makes it an invaluable foundation and starting point—is that it connects the political-economic critique of capitalism to the ecological critique of capitalism, as two sides of the same coin. No other form of ecological analysis or critique has this kind of breadth or power.

Ultimately, it goes back to Marx’s early understanding that the alienation of labor was based on the alienation of nature. In terms of agency, I have argued that Marx’s writings and that of the early Engels (particularly The Condition of the Working Class in England), point to the notion of what we could call “the environmental proletariat.” That is, the proletariat is most revolutionary when all of its conditions of existence, not simply working conditions, are subject to degradation.

Today we are in what scientists are calling the “Anthropocene epoch.” (Incidentally, the term “Anthropocene” as representing the rapid geological transformation of the entire biosphere was first introduced by Alexei Pavlov, Vernadsky’s colleague, in the U.S.S.R. in the 1920s.) In the present planetary epoch, the concept of sustainable human development, as a way of conceiving of socialism, represents Marx’s most valuable legacy.