Objections to the word ‘Anthropocene’ are misguided.

In one of Douglas Adams’ Hitchhiker’s Guide to the Galaxy books, a committee of marketing managers, stranded on a prehistoric planet, is unable to invent the wheel. Responding to a critic, the committee chair says, “Ok, if you’re so clever, you tell us what color it should be!” 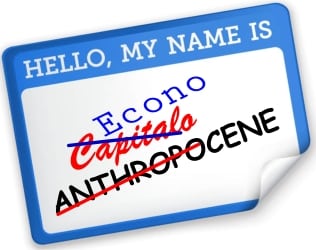 I’m reminded of that scene every time I read yet another article that responds to one of the most important scientific developments of our time, the Anthropocene, with the complaint that the scientists got the name wrong.

Never mind all that stuff about the Earth System changing in unprecedented and dangerous ways—change the name!

So far as I can tell, none of the proponents has submitted their suggestions to the Anthropocene Working Group, where their proposals could be formally considered. But since the suggestions reveal misunderstandings about the word itself, and about the conventions used in naming geological epochs, a short discussion is in order.

To begin, Anthropocene is a proposed name for a new geological epoch so the proposed name must follow geology’s naming conventions. The alternative proposals just add a new word in front of the suffix -cene, apparently believing that it means epoch or age, which it does not.

After the Pleistocene, Lyell added an interval that he just called Recent, but in 1885 the International Geological Congress changed that to Holocene, from the Greek holos, for strata in which the fossils are wholly or entirely recent.

So, contrary to what is often said in magazine articles, Anthropocene does not mean Human Age or Human Era. It combines kainos with anthropos, meaning human being, so, following Lyell’s approach, it means a time when geological strata are dominated by remains of recent human origin. Indeed, a key part of the ongoing Anthropocene debate among geologists concerns which such remains should be used to identify the new epoch. From the perspective of historical and physical geology, the name is appropriate.

In left-wing circles, the most often proposed alternative name for the new epoch is Capitalocene. Proponents argue that global change is being driven by a specific form of society, not humans in general, so the new epoch should be named after capitalism.

That would be a strong argument, if geological intervals were named after social systems, but they are not. If our current epoch is the Capitalocene, then surely the previous epoch should be renamed Feudalocene, preceded by the Slaveryocene, preceded by . . . what? The Hunter-Gatherer-ocene?

Take a deep breath, folks. The fact of the Anthropocene raises important political issues, but there is no hidden political agenda in the word Anthropocene. It does not imply a judgement about all humans or human nature.

The root word anthropos also appears in another common Earth Science term, anthropogenic. The expression “anthropogenic climate change” does not mean that all humans cause global warming; rather, it distinguishes changes that are caused by human action from those that would have occurred whether or not humans were involved. Similarly, Anthropocene doesn’t refer to all humans, but to an epoch of global change that would not have occurred in the absence of human activity.

The name is not perfect. As the often overheated discussions show, it is open to misinterpretation. Maybe if ecosocialists had been present when Paul Crutzen invented the word in 2000, a different name would have been adopted, but now Anthropocene is widely used by scientists and non-scientists alike. Insisting on a different word (for left-wing use only?) can only cause confusion, and direct attention away from far more important issues.

Let’s focus on the wheel, and not get hung up what color it is.