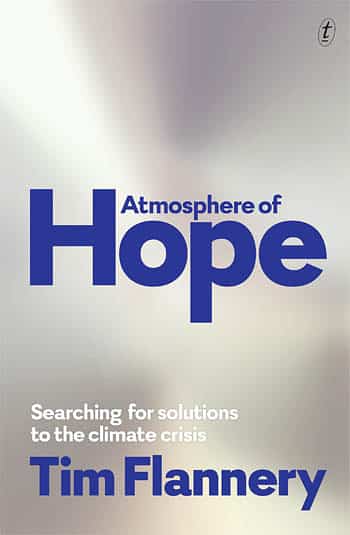 Australian scientist Tim Flannery became fascinated with proposals to extract excess carbon dioxide from the atmosphere and oceans when the billionaire aeronautics carbon-polluter Richard Branson, in response to Flannery’s first book on climate change, The Weather Makers, invited Flannery to be a judge on Branson’s £25 million Virgin Earth Challenge prize for methods of carbon withdrawal and storage.

Amongst the entrants, writes Flannery in his latest book,Atmosphere of Hope, he found a dozen that could become “indispensable tools for our survival.” He calls these the “Third Way” of tackling global warming. He says they are superior to adaptation to a dramatically warmed world, and safer than geo-engineering plans to reflect solar radiation back into space — a dangerous “cure” potentially worse than the disease.

Flannery believes that some climate engineering techniques are more acceptable because they simply accelerate natural processes of atmospheric and hydrological carbon management.

Using photosynthesis to grow vegetation, for example, that dines on CO2 and stores the waste carbon as plant matter, but this process is only 1% efficient. We can force nature to do better, Flannery says, by dramatically boosting the pace of the natural carbon cycle and storing the extracted carbon in biological (forest, seaweed, biochar) form or in synthetic products, or by sequestering it through deep or frigid (South Pole) burial.

“Third Way” techniques range from the unobjectionable – reforestation and wetlands reclamation — to the more problematic. The problematic techniques include ocean fertilization, chemically-enhanced weathering of rocks, production of carbon-negative cement and plastics, and carbon capture that is not designed simply to prolong the life of fossil fuels.

Flannery is excited by the technical possibilities and challenges of his “Third Way” carbon-suckers and his desperate desire to resurrect a habitable world is genuinely passionate. But his “Third Way” project is unconvincing and, in the end, self-defeating.

To be fair to Flannery, he does temper his enthusiasm with an acknowledgement of the problems that beset “Third Way” climate salvation. These include scientific complexity, environmental risk, intimidating cost, problems of scale and decades-long lead-times.

But he argues that these issues necessitate embarking on the “Third Way” now to overcome such difficulties in time to avoid climate catastrophe.

This approach, however, detracts attention and resources from the urgency for economic and political campaigning to tackle global warming and its fossil fuel industry culprits now.

Although Flannery argues that “Third Way” de-carbonization must not be used as an excuse for the failure to cut fossil fuel emissions, his Pollyanna view of a capitalism-friendly techno-fix to bypass political failure on climate change is most likely to contribute to the global warming inertia of business-as-usual — no matter how bad the climate gets.

At best, this plan to skirt the major roadblock of the economic power and political influence of fossil fuel interests through science, green entrepreneurship and the market is doomed to be, at best, too gradual and ineffectual. At worst, it is counter-productive.

By not scaring the sacrosanct GDP horses, by not challenging the capitalist god of economic growth, Flannery obscures the link between global warming and the capitalist economic system that has given rise to it. This link, as Canadian author and climate activist Naomi Klein has argued, is grasped by smokestack-hugging political conservatives better than most, and which underlies their climate denialism and their fierce and extremely well-funded resistance.

Flannery’s “Third Way” is the grand, and risky, illusion of geo-engineering, albeit shorn of its dangerously wilder fantasies, that will keep capitalism humming all the way up to environmental Armageddon.

The “Third Way” is predicated on the inviolability of economic growth with its imperative of making more profits by selling more stuff to more people. Flannery’s future of low-carbon, “Third Way” cement, plastics and electric cars would colonize ever more of the biosphere in a victory for the capitalist growth principle over a livable planet.