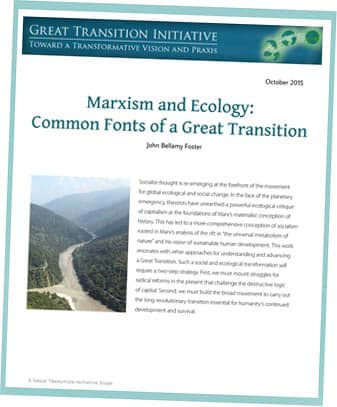 The Great Transition Initiative has published an important new essay by John Bellamy Foster,  editor of Monthly Review and author of many essential books on Marxist ecology, discussing the common concerns of Marxist Ecology and the Great Transition project in preventing global ecological destruction.

“To link Marxism and ecological transition may seem at first like trying to bridge two entirely different movements and discourses, each with its own history and logic: one having mainly to do with class relations, and the other, the relation between humans and the environment. Historically, however, socialism has influenced the development of ecological thought and practice, while ecology has informed socialist thought and practice. Since the nineteenth century, the relationship between the two has been complex, interdependent, and dialectical.

“Marxian approaches to the planetary ecological crisis and the socio-ecological transformation necessary for its resolution have evolved rapidly in recent decades. This has created the basis for a much more powerful, collective struggle for a Great Transition, in which values of ‘consumerism, individualism, and domination of nature’ are replaced with ‘a new triad: quality of life, human solidarity, and ecological sensibility.’ The demands for a society dedicated to need rather than profit and to human equality and solidarity have long been associated with socialism. More recently, socialist thinkers have given equal importance to ecological sustainability, building on Karl Marx’s environmental critique of capitalism and his pioneering vision of sustainable human development.

“This essay unearths the deep ecological roots of Marx’s thought, showing how he brought an environmental perspective to bear on the overarching question of social transformation. From there, it traces the evolution of Marxian ecology, illuminating its profound, formative link to modern ecological economics and systems ecology. It concludes by discussing the wider project of building a social movement broad and deep enough to halt and reverse ecological and social destruction.”

The Great Transition Initiative describes itself as “an online forum of ideas and an international network for the critical exploration of concepts, strategies, and visions for a transition to a future of enriched lives, human solidarity, and a resilient biosphere.” True to that objective, the editors have published Foster’s essay along with commentaries by David Barkin, Michael Brie, Hannah Holleman, Tim Jackson, Giorgos Kallis, Kent Klitgaard, Ashish Kothari, Fred Magdoff and Rasigan Maharajh, and a reply by Foster.

Read the full text of Foster’s essay, with associated comments and response, here:
Marxism and Ecology: Common Fonts of a Great Transition