Australia’s coal industry is propped up by huge government subsidies, despite the downturn in the global coal trade and a divestment campaign. 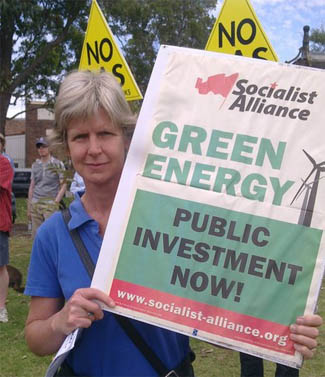 Pip Hinman is a member of the Socialist Alliance in Sydney, Australia

Scientists have warned that if humanity is to avoid catastrophic climate change — which means limiting a rise in average global temperature to 2°C above that of pre-industrial times — most known fossil fuels reserves have to stay in the ground.

The science is lost on Australia’s Tony Abbott government, which argues that the country’s vast fossil fuel reserves will ensure the country’s energy remains “cheap.”

Since the Abbott government approved the Shenhua-Watermark open-cut mega coalmine in the food bowl of the NSW Liverpool Plains, coal corporations have been lining up for approvals — in the Bylong Valley, the Hunter Valley, at Caroona on the Liverpool Plains and at Warkworth, where it has been suggested that the township of Bulga move out of the mine’s way.

We’ve all heard the refrain that fossil fuels are “cheap” and renewables are “expensive”. This is untrue. New data shows that the real costs — social, economic and political — associated with fossil fuel-based energy systems are massive.

The decline in global trade for coal is yet another reason to leave it in the ground.

According to the Australian government’s Australian Bureau of Resources and Energy (ABARE) June quarterly report, world trade in thermal coal is likely to decline by 4.6% this year. This is due to a world glut and China’s move to reduce thermal coal imports by 31%.

The report also said that trade in metallurgical coal — used to produce iron and steel — declined substantially in the first half of 2015. This was also due to a glut and the drop in demand from China.

Industry commentators say the global coal industry was banking on China hitting peak coal consumption by around 2020 and that the sudden fall in demand this year has been a shock.

The downturn in demand for coal has been marked in the US. There, coal prices for 2015 are down 70% from four years ago, the June 17 Wall Street Journal said. This has prompted several major energy companies to file for bankruptcy and try to turn their debts into equity at the expense of ordinary workers, oilprice.com said on July 21.

Other companies are downsizing. Peabody, the world’s largest private coal company, with mines across Queensland and NSW, announced on July 8 that it was selling Wilkie Creek Mine in Queensland’s Surat Basin.

Another factor starting to have in impact on energy policy is the global push for divestment from fossil fuels.

On April 30, the Church of England announced it would divest £12 million ($25.7 million) from coal and oil-sand producers. It will also refuse to invest in any business that gets more than 10% of its revenue from fossil fuels. “Climate change is already a reality,” Rev Richard Burridge, deputy chair of the church’s ethical investment advisory group told Bloomberg Business on May 1. “The church has a moral responsibility to speak and act on both environmental stewardship and justice for the world’s poor who are most vulnerable to climate change.”

More institutions are joining the global divestment movement: they include Glasgow University in Scotland and Stanford University in California. On May 27, Norway announced it would block investment in any company that operates in multiple sectors, but receives more than 30% of its revenues from coal or utilities that generate more than 30% of their electricity from coal.

A grassroots push, spearheaded by 350.org, across Australian universities is trying to make administrations scrutinise where their energy is sourced, and switch to sustainable options. Some superannuation companies are now advertising they do not invest in the fossil fuel industry.

These campaigns are also highlighting the huge, and largely hidden, subsidies being given to fossil fuel companies. The Australian Conservation Foundation’s May 2014 budget submission estimated the federal government passes $13 billion in subsidies to the fossil fuel and mining industries each year.

Globally, an International Monetary Fund report released in May, How Large Are Global Energy Subsidies?, estimated that the cost of subsidising the fossil fuel industry is a whopping US$5.3 trillion a year — or around US$10 million a minute. This amounts to more than 6% of global GDP.

The key findings of the report were:

The report also noted that eliminating the subsidies would raise government revenue by $2.9 trillion (3.6% of global GDP), cut CO2 emissions by more than 20% and cut premature deaths from air pollution (about 1.6 million a year) by more than half. Coal is the biggest recipient of the subsidies. Petroleum is the next highest recipient, followed by natural gas.

There are some who think the IMF has underestimated the scale of the government subsidies. British economist Nicholas Stern said on May 18 that the IMF may not have taken into account the subsidies and costs involved in the fossil fuel industry’s failure to pay for its pollution, for climate change, for social decay, including large scale health problems as well as the broader economic costs associated with the burning of coal, oil and gas.

Every dollar spent on propping up the fossil fuel industry with diesel fuel rebates, infrastructure funding and royalties discounts is a dollar not being spent on schools, hospitals or public infrastructure.

As Australia Institute director of research Rod Campbell told a Senate inquiry on May 19:

“We know that over a six-year period, state governments in Australia spent $17.6 billion supporting the mineral and fossil fuel industries. We know that big miners are being given all sorts of subsidies, some direct and some indirect. These subsidies also fight against the transition to renewable energy. The old, false story of ‘cheap’ fossil fuels is bunk. In addition to the health and climate costs that are never accounted for, they’re very directly costing taxpayers billions.”