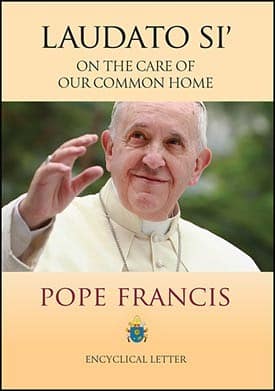 No one could mistake the pope’s June 18  encyclical letter Laudato Sí (Praise be to you) for anything other than a religious statement. Its title comes from Saint Francis of Assisi:  “Praise be to you, my Lord, through our Sister, Mother Earth, who sustains and governs us, and who produces various fruit with colored flowers and herbs.” It returns again and again to Christian scripture and faith to justify its call for a “bold cultural revolution” to save the Earth.

And yet this lifelong atheist and Marxist finds more to agree with in Pope Francis’s statement than in just about anything I’ve seen from greenish NGOs and politicians. I have many profound disagreements with the Catholic church, but we are allies in fighting the number one crisis facing humanity today.

I’ve posted the full text of Laudato Sí in English. The quotes below show why I recommend it.

PS: No surprise: The president of the anti-green Breakthrough Institute, Michael Shellenberger, spent a lot of time on Twitter this week, telling his faithful followers that the Pope is wrong, wrong, wrong. His many tweets fully confirm what I wrote about them in Hijacking the Anthropocene

Some excerpts from Laudato Sí