So much for “private enterprise” – the IMF says energy companies receive $5.3 trillion a year in subsidies from governments worldwide 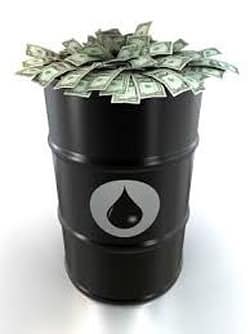 The fossil fuel industry receives $5.3 trillion a year in government subsidies, despite its disastrous toll on the environment, human health, and other global inequality issues, a new report by the International Monetary Fund (IMF) published has found.

That means that governments worldwide are spending $10 million every minute to fund energy companies—more than the estimated public health spending for the entire globe, IMF economists Benedict Clements and Vitor Gaspar wrote in a blog post accompanying the report (pdf).

“These estimates are shocking,” Clements and Gaspar wrote. “The number for 2015 is more than double the US$2 trillion we had previously estimated for 2011.”

“[P]re-tax” subsidies—which occur when people and businesses pay less than it costs to supply the energy—are smaller than a few years back. But “post-tax” subsidies—which add to pre-tax subsidies an amount that reflects the environmental, health and other damage that energy use causes and the benefit from favorable VAT or sales tax treatment—remain extremely high, and indeed are now well above our previous estimates.

The damages from energy use include “premature deaths through local air pollution, exacerbating congestion and other adverse side effects of vehicle use, and increasing atmospheric greenhouse gas concentrations,” the report states.

“Energy subsidies are both large and widespread. They are pervasive across advanced and developing countries,” Clements and Gaspar write. The worst offenders are China, which gave a $2.3 trillion subsidy to its domestic fossil fuel industry, and the U.S., which spent $699 billion.

“In China alone, the World Health Organization estimates there are over one million premature deaths per year due to outdoor air pollution, caused by the burning of polluting fuels, particularly coal, and other sources,” Clements and Gaspar continued.

Lord Nicholas Stern, an eminent climate economist at the London School of Economics, told the Guardianon Monday, “This very important analysis shatters the myth that fossil fuels are cheap by showing just how huge their real costs are. There is no justification for these enormous subsidies for fossil fuels, which distort markets and damages economies, particularly in poorer countries.”

If anything, the report’s findings are “conservative,” Steve Kretzmann, executive director of Oil Change International, told Common Dreams. “[I]t doesn’t include direct subsidies to fossil fuel producers, and it doesn’t include things like the cost of military resources to defend Persian Gulf oil.”

“But whether the total is $1 trillion or $6 trillion is not really the point,” Kretzmann continued. “The point is that our tax dollars need to immediately stop aiding the industry that is most responsible for driving climate change. There are more than enough studies out now that prove this is an industry that relies on substantial amounts of corporate welfare.  We don’t need more studies—what we need is the political courage to end all fossil fuel subsidies once and for all.”

Coal gets the highest subsidies, the report states, “given its high environmental damage and because (unlike for road fuels) no country imposes meaningful excises on its consumption.”

The report follows a Guardian investigation which found that fossil fuel projects operated by Shell, ExxonMobil, and Marathon Petroleum in 2011 and 2012 each received between $78 million and $1.6 billion in taxpayer funding, “all granted by politicians who received significant campaign contributions from the fossil fuel industry.”

In light of these staggering numbers, subsidy reform would be a “game-changer,” Clements and Gaspar wrote.

According to the report, “Eliminating post-tax subsidies in 2015 could raise government revenue by $2.9 trillion (3.6 percent of global GDP), cut global CO2 emissions by more than 20 percent, and cut pre-mature air pollution deaths by more than half. After allowing for the higher energy costs faced by consumers, this action would raise global economic welfare by $1.8 trillion.”

“The icing on the cake is that the benefits from subsidy reform—for example, from reduced pollution—would overwhelmingly accrue to local populations,” said Clements and Gaspar. “Even if motivated purely by national reasons, energy subsidy reform would have favorable effects globally.”

“By acting local, and in their own best interest, policy authorities can contribute significantly to the solution of a global challenge. The path forward is thus clear: act local, solve global.”

This article is licensed under a Creative Commons Attribution-Share Alike 3.0 License from Common Dreams, May 18, 2015