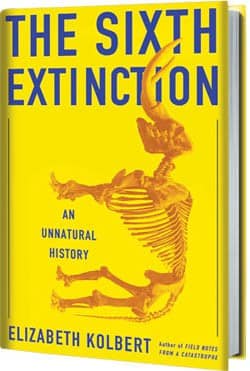 THE SIXTH EXTINCTION:
An Unnatural History
by Elizabeth Kolbert
Macmillan/Picador, 2014

Although contemporary society is not the first to destroy the natural environment on which it relies for its survival and well-being, it is doing so to an extent never before imaginable. As Elizabeth Kolbert reports in The Sixth Extinction, humanity verges on generating a loss of species not seen since the mass extinction 66 million years ago that killed off the dinosaurs. As conditions now stand — and they could certainly get worse — “one-third of all reef-building corals, a third of all freshwater mollusks, a third of sharks and rays, a quarter of all mammals, a fifth of all reptiles, and a sixth of all birds” could face extinction. No place on the planet is safe from this die-off: “The losses are occurring all over: in the South Pacific and in the North Atlantic, in the Arctic and the Sahel, in lakes and on islands, on mountaintops and in valleys.”

Kolbert describes many proximate causes for the unfolding tragedy. An invasive fungus is decimating frog populations in Central America. Ocean acidification is endangering corals and other calcifiers. Deforestation and forest fragmentation are wiping out the habitats of many tropical species. A planetary driving force — climate change — is intensifying these proximate causes, making their effects increasingly severe. The hardier and more footloose creatures will likely survive the onslaught for some time. However, if humanity continues on its current trajectory, an innumerable variety of species will be left with no escape route.

Kolbert’s account of the crisis traverses a large span of the globe. She hops across the planet from one research site to another, documenting her interactions with quickly vanishing creatures and the scientists who study them, and incorporates two centuries of scientific debate about extinctions into her analysis. In all, the book offers an accessible, insightful account of the sixth extinction.

However, one cannot so praise the book’s approach to the social dimension of the crisis. Kolbert rightly notes that the cause of the unfolding extinction crisis is “one weedy species” — humanity. The persuasive power of her account breaks down when she attempts, all too briefly, to discuss why humanity is wreaking such havoc, with no consideration of the crucial role that capitalism’s relentless search for growth and accumulation has played.

Pointing to the eradication of megafauna in Oceania and the Americas by prehistoric societies, she posits that “man was a killer … pretty much right from the start.” She continues, “Though it might be nice to imagine there once was a time when man lived in harmony with nature, it’s not clear that he ever really did.” Humanity is, and always has been, so the account goes, a blight on the rest of nature.

The limitation of the “man-the-killer” trope is not only that it glosses over important historical differences, but also that it fails to offer a path forward as we deal with the present crisis. In order to do so, we must understand the historically specific reasons why the prevailing social arrangement has such an antagonistic relationship with nature. Otherwise, we can do very little to stop the ongoing trajectory of devastation.

Kolbert needed only to explore further the findings presented in her own book to see the very different reasons why both primitive and modern societies have caused extinctions. Kolbert notes that the megafauna wiped out in the prehistoric era would have had difficulty adjusting to the presence of the human species while relying on traits developed before humans appeared. She points out, moreover, that such prehistoric extinctions likely occurred over several hundreds, or even thousands, of years: “For the people involved in it, the decline of the megafauna would have been so slow as to be imperceptible. They would have had no way of knowing that centuries earlier, mammoths and diprotodons had been much more common.”

The sixth extinction differs from such earlier cases in several ways. For one, the scale and pace of the anthropogenic devastation is unrivaled in human history. While prehistoric humans reshaped the ecologies of entire continents by introducing invasive species and hunting various megafauna to extinction, the ecological balance would ultimately be restored and would once again flourish. Today, though, through human activity, the global ecological balance faces the risk of irreparable damage, and this reality has taken shape in just a few hundred years.

The transition from the prehistoric era to the present has not been simply a matter of acquiring more advanced technologies and higher population densities: a radical transformation of societal imperatives has also occurred. One can see this dynamic in Kolbert’s chapter on the great auk, a flightless bird hunted to extinction in the eighteenth century. The penguin-like bird nested in densely packed groups on islands throughout the North Atlantic, and seventeenth-century seafarers prized it as an easy to catch source of sustenance, filling their ships with enormous numbers of great auks during their ocean voyages. Still, only when the bird began to be hunted for its feathers — used in mattresses and pillows — did its existence as a species come to be threatened.

Funk Island, a landmass estimated to have been home to up to one hundred thousand mating pairs of great auks, was the site of a particularly systematic decimation. “The feather trade had become so lucrative,” Kolbert writes of the late eighteenth century, “that teams of men were spending the entire summer on Funk, scalding and plucking.” Unsurprisingly, the bird’s population rapidly declined, and by the early years of the following century, the last members of the species were picked off.

The great auk’s terrible misfortune was that its feathers became raw materials for commodities produced for exchange. Production of this kind is inherent to capitalism. However, the market does not just wreak havoc on those species prized for exchange; those deemed not profitable face significant risk as well. Forests and other natural habitats are routinely degraded, and their denizens displaced, an unintended side-effect of an economy rooted in the pursuit of profit.

While the productive dynamism of capitalism has led to impressive gains in the standards of living for significant numbers of people, increases in productivity do not translate into material fulfilment. Rather, growth in productivity continuously requires the creation of new consumer desires in order to absorb the ever-increasing number and variety of commodities produced. The quantitatively limitless activity of exchange-value production cannot help but put a strain on nature’s ultimately limited abundance.

This same mode of production also places terrible strains on large sections of humanity. Among countless other injustices, buildings collapse on sweatshop workers, suicide becomes endemic among debt-burdened farmers, and communities are driven off their traditional lands, all in order to service the goal of producing more exchange-value. Although Kolbert blames an undifferentiated humanity for the environmental crisis, not all members of our “weedy species” are alike. Not everyone is equally responsible for contributing to the crisis, nor does everyone bear its consequences equally.

By downplaying the social dimensions of the extinction crisis, Kolbert’s outlook tends toward the misanthropic. She writes, “[A] hundred million years from now, all that we consider to be the great works of man — the sculptures and the libraries, the monuments and the museums, the cities and the factories—will be compressed into a layer of sediment not much thicker than a cigarette paper.” Further, she argues, “Our most enduring legacy will not have anything directly to do with us. Rather, it will have to do with how many evolutionary pathways we allow to remain open and what forms of life are able to emerge long after we are gone.” Thereby, she concludes, “the fate of our own species … is not, in the end, what’s most worth attending to.”

To be sure, Kolbert’s misanthropy is far milder than similar attitudes found in some strains of “deep ecology,” whose proponents seem to wish that humanity itself would just disappear in order to preserve the larger project of life on earth. Unhindered by our callous and feckless species, evolution could once again create a profusion of diverse species. Nevertheless, the book reflects a preservationist philosophy, found among many environmentalists, that essentializes humanity — we’re wired to over breed and over consume — and romanticizes pristine, innocent nature. In a time of runaway threats to the biosphere, this outlook, rooted in a world-weary sense of inevitable collapse, can easily segue into a counsel of despair: we have seen the enemy and it is us.

Of course, human beings are a part of nature and are not likely to disappear any time soon, nor should they. Thinking we should, whether stated explicitly or left between the lines, tends to harden our hearts against the suffering of the most vulnerable members of our own species. Instead, we can recognize that the same historically constructed — and mutable — societal imperatives that victimize our fellow species victimize our fellow humans as well. Then, we can lay bare the perniciousness of the prevailing social system for the whole community of life, paving the way for the robust solidarity we need, not only to counter extinction and impoverishment, but also to improve conditions for all life on our small planet.

Reposted from the Great Transition Intitiative, by permission of the author. Umair Muhammad is the author of Confronting Injustice: Social Activism in the Age of Individualism, and a member of Jane and Finch Action Against Poverty, where he is helping to organize against pipeline projects.