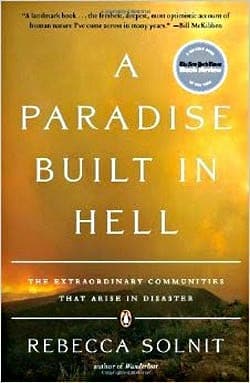 A PARADISE BUILT IN HELL
The extraordinary communities
that arise in disaster
by Rebecca Solnit
Penguin Books, 2010

A Paradise Built in Hell ought to be read widely. All the latest climate change science suggests that the world is going to experience increased extreme weather, from floods and heatwaves, to hurricanes and rising sea levels. Solnit’s book is important for two reasons. The first is that the “extraordinary communities” that arise in disasters are going to occur more often. The second is that the response from those at the top of society is often the worst way to respond to disasters and reflects the way those at the top view the majority of people.

We think of disasters in a particular way. It is a view shaped by common sense, by the media and by disaster movies. We believe, or at least we are told to believe, that when crisis hits, as society around us breaks down and when the state ceases to function we will return to some primitive nature dominated by selfishness and greed. We also think that any survivors will be damaged irreparably by their experience. Of course some people do respond to floods and earthquakes with violence and looting, and some people are utterly damaged by what they have seen.

But what Solnit’s survey of disasters shows is that the opposite is actually true. Frequently, and more often than not, ordinary people respond to disaster with self-sacrifice, humanity, kindness and basic solidarity. As shown by her overview, from the San Francisco earthquake of 1906 to 9/11 in New York and New Orleans in 2008, as well as many other examples.

Old boundaries are broken down, old prejudices changed, motives turned on their head and new ways of thinking abound. Here’s an example from San Francisco when three thousand people had died and many more had lost their homes,

“Charles Reddy, the manager of Miller and Luz, one of the big slaughterhouses on the city’s southeast shore, also tells of the openhandedness that sprang up in the hours and days of the disaster. Reddy says that the proprietor’s ‘first thought that morning was that homeless people would soon be wanting meat, and my straight orders were to give every applicant all he needed and take money from nobody. Black, white, and yellow were to be treated just the same; and they were treated just the same, even if we had all Chinatown camped down quite near us.”

Others in San Francisco, and this mirrors experiences in other disasters, began not just to fend for themselves, but to organize those around them. Makeshift hospitals, soup-kitchens, shelters and camps. Long before official assistance arrived people’s lives had been saved in their thousands by volunteer firefighters, nurses, cooks and drivers. In Halifax in 1917, when a munitions ship exploded destroying the town in seconds,

“A young businessman named Joe Glube slept through the explosion… he realized how horrific the disaster had been and how great the need and [took] his secondhand Ford to the grocery warehouses. They had been opened and volunteers were busy distributing their contents to the public. He began setting out with supplies and hauling the injured in to where they could be aided… Such improvisation – new roles, new alliances, new rules – are typical of disaster.”

Most often these were ordinary people, but sometimes not. There’s a wonderful anecdote in here of the woman who remarked that she had never met more people without introduction that during her disaster. Solnit points out that frequently people look back on their experiences as the best time of their lives, and while not everyone’s memory of the Blitz is positive, the experiences of many was. Charles Sedgewick wrote of 1906

“‘The strong helped the weak with their burdens and when pause was made for refreshment, food was voluntarily divided; milk was given to the children, and any little delicacies that could be found were pressed upon the aged and the ailing.’ And then he says, ‘Would that it could always be so!’ And here you get to the remarkable fact that people wish some aspects of disasters would last. He continues, “No one richer, none poorer than his fellow; no coveting the other’s goods; no envy; no greedy grasping for more than one’s fair share of that given for all… What a difference those few days when there was no money, or when money had no value!”

Of course the return of the state means attempts to return things to normal. In 1906 this meant the arrival of the army with orders to shoot to kill, their vision of the city was it would have descended in to an anarchy of rape, murder and looting. Though as Solnit points out, looting is actually rare in disasters, people breaking into shops to find food and shelter isn’t (and it shouldn’t be seen as wrong in that context). One historian estimates that the forces who arrived in San Francisco after the quake killed 500 people. Certainly those organizing the mass feeding stations preferred to organize themselves, rather than hand over to the authorities. Solidarity, not charity.

Two of the more modern crises bring these arguments into sharp relief. Both are difficult to read. The accounts of 9/11 and New Orleans are filled with unimaginable suffering, both at the hands of terrorists or the hurricane, but also at the incompetence of the authorities. In both cases the authorities expected chaos and the degeneration of people into animal behavior, and in both cases ordinary people organised to save lives when the system broke down.

From the men and women who got 300,000 people across the river off Manhattan Island in the aftermath of 9/11 to those who travelled to New Orleans to organize soup kitchens and medical aid. Indeed Solnit makes the point that for all the power of the US military and the hours that they had to act on 9/11, the only people who actually stopped any terrorism on that terrible day, where those on the final plane who organized to stop the hijackers.

Solnit emphasizes the “elite panic” that grips the authorities at times of crisis, contrasting this with the attitudes of the majority.

“Elites and authorities often fear the changes of disaster or anticipate that change means chaos and destruction, or at least the undermining of the foundations of their power. So a power struggle often takes place in disaster — and real political and social change can result from that struggle or from the new sense of self and society that emerges… the elite often believe that if they themselves are not in control, the situation is out of control, and in their fear take repressive measures that become secondary disasters. But many others who don’t hold radical ideas, don’t believe in revolution, don’t consciously desire profound social change find themselves in a transformed world leading a life they could not have imagined and rejoice in it.”

As she comments later, “disasters without redemptive moments raise the question of redemptive moments without disaster,” and many readers of this review who have experience of other situations might recognize some of Solnit’s themes. Revolutionaries often talk about how people are transformed through struggle, strikes, protest movements, or revolutions. Participants experience the world differently, learn new skills, see others through different eyes, overcome inhibitions and grow in confidence. At the high points of class struggle, mass strikes and revolutions, the world seems turned upside-down and the potential for new ways of organizing shine through.

Solnit sees this, describing her experience of campaigning against war, and interviewing those involved with Cindy Sheenan in her anti-war protests at George W. Bush. The stories reflect those of people involved in disasters, and many went on to play key roles from outside at New Orleans. She makes that point that disaster isn’t necessary for people to help, volunteer or make sacrifices for others. But within disasters there is a concentration of need and urgency, as well as a lack of alternatives that forces people to act, and act they do, with willingness far removed from the imagination of a Hollywood scriptwriter.

The stories of solidarity and self-sacrifice in this book are inspiring. But surprisingly what we also learn is that ordinary people really do have the potential to run society.

UK-based Martin Empson is the author of Marxism and Ecology; Capitalism, Socialism and the Future of the Planet. This review is reposted, with permission, from his blog, Resolute Reader.