Victor Wallis is managing editor of the journal Socialism and Democracy. His articles on the ecological crisis and on left movements have been translated into twelve languages. 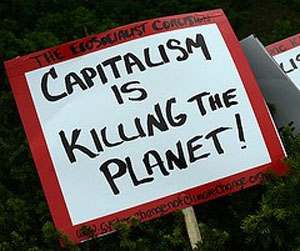 400 parts per million of atmospheric carbon dioxide may seem an arbitrary milestone, but given the scientific consensus that 350 ppm is the maximum compatible with long-term species-survival, we may take the newer and higher figure as an occasion for reflecting on where human society is headed.

I suspect that in most parts of the world, the 400 threshold is being crossed without much notice. Too many concerns of a more immediate nature get in the way, be they the routines of daily life or the more spectacular events – almost always of the “bad news” variety except on sports-pages – that flood our media-outlets.

This is unfortunate, for although many such matters have a legitimate claim on our attention, the conditions for our collective survival are being undermined on a continuing basis while we’re not looking.

To the extent that people are oblivious to this danger, it is pointless to criticize them. What we must do, rather, is discover the real links that exist between those unavoidable day-to-day occurrences and the forces that are now steadily undermining the conditions of life. A necessary step toward establishing such links is to understand – and explain to others – that the fate of the environment is a class issue.

Of course, the destruction of the environment will ultimately engulf people of all classes, including even the capitalists (whatever short-run success they might have in hoarding vital necessities). But the immediate policy issues are nonetheless framed by class, in a number of ways.

First of all, it is the class interest of capital that dictates the permanent pursuit of economic growth. Without this capitalist drive, increased economic activity in some sectors could be more than offset by reduced activity in sectors whose output does not add to human well being (e.g., military, status luxuries, excessive numbers of cars, etc.).

Related to this is the fact that capitalism’s political operatives consistently obstruct efforts to protect the population against environmentally destructive activities, such as the increasingly dangerous processes involved in extracting fossil fuels (e.g., deep-water drilling for oil, mountaintop removal for coal, hydraulic fracturing for natural gas).

More generally, while it is true that no one has a positive interest in destroying the environment, capital has an interest in blocking measures that could protect it. In countries where the political opposition to capital is well-organized, such obstruction may be partially neutralized. But, given the extreme scale of the current danger, it is necessary to do more than just regulate and punish the worst abuses; we have to redefine the priorities of production and consumption. We need fewer planes and more bicycles; fewer parking areas and more biodiversity; fewer high-tech gadgets and more opportunities for direct interaction in public space.

On a global scale, the strongest opposition to such altered priorities comes from the government that most fully embodies the power of capital, namely that of the United States. Here, capital shows its basic thrust with the least restraint. It has to such an extent dominated the environmental debate that the very fact of humanly produced climate change is still widely viewed as being unproven.

Thus every level of the political battle over environmental policy is bound up with class interests. The capitalist class, with its commitment to accumulation and expansion, still holds most of the positions of strength. Recognizing this class-dimension to the environmental struggle is important at both the domestic and the international levels.

At the domestic level, we can become more alert to how preservation of the environment is tied to other working-class or anti-capitalist demands. The forces that drive the assault on the environment are the same ones that seek to hold down wages and that divert resources away from satisfying human needs and toward concentrating wealth and maintaining global military supremacy.

The military dimension alerts us to the international level at which we need to consider capital’s anti-environmental thrust. It is common knowledge that nature does not recognize political boundaries. What is done to the ecosphere in one locality affects all other localities as well. This gives people in all countries a legitimate interest in practices pursued anywhere insofar as these affect the future of the planet.

The common interest of people across national boundaries reminds us once again of the need for the kind of internationalism that was initially advanced in the Communist Manifesto, but which subsequently suffered crushing setbacks throughout the world. Its guiding principle is quite straightforward. The working class – or, more generally, the popular majority – in each country has more in common (in terms of basic interests) with its counterparts in other countries than it does with the ruling class in its “own” country.

For Marx and Engels in 1848, this insight was the key to revolutionary consciousness. For us in the 21st century, it is also the key to survival.

Reposted, with permission from the author and editor, from Spectrezine, a radical journal of the European Left.