Around the world, giant agribusinesses are displacing the most productive farms. Only by returning land to small farmers can we feed the world’s hungry.

Around the world, giant agribusinesses are displacing the most productive farms. Only by returning land to small farmers can we feed the world’s hungry.

GRAIN is a small international non-profit organisation that works to support small farmers and social movements in their struggles for community-controlled and biodiversity-based food systems. 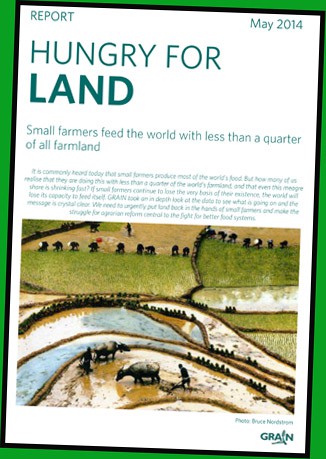 The United Nations declared 2014 as the International Year of Family Farming. As part of the celebrations, the U.N. Food and Agriculture Organisation (FAO) released its annual “State of Food and Agriculture”, which this year is dedicated to family farming. Family farmers, FAO say, manage 70-80 percent of the world’s farmland and produce 80 percent of the world’s food.

But on the ground – whether in Kenya, Brazil, China or Spain – rural people are being mmarginalized and threatened, displaced, beaten and even killed by a variety of powerful actors who want their land.

A recent comprehensive survey by GRAIN, examining data from around the world, finds that while small farmers feed the world, they are doing so with just 24 percent of the world’s farmland – or 17 percent if you leave out China and India. GRAIN’s report also shows that this meagre share is shrinking fast.

The confusion stems from the way FAO deal with the concept of family farming, which they roughly define as any farm managed by an individual or a household. (They admit there is no precise definition. Various countries, like Mali, have their own.)

Thus, a huge industrial soya bean farm in rural Argentina, whose family owners live in Buenos Aires, is included in FAO’s count of “family farms”. What about sprawling Hacienda Luisita, owned by the powerful Cojuanco family in the Philippines and epicentre of the country’s battle for agrarian reform since decades. Is that a family farm?

Looking at ownership to determine what is and is not a family farm masks all the inequities, injustices and struggles that peasants and other small-scale food producers across the world are mired in.

It allows FAO to paint a rosy picture and conveniently ignore perhaps the most crucial factor affecting the capacity of small farmers to produce food: lack of access to land. Instead, the FAO focuses its message on how family farmers should innovate and be more productive.

Small food producers’ access to land is shrinking due a range of forces. One is that because of population pressure, farms are getting divided up amongst family members. Another is the vertiginous expansion of monoculture plantations.

In the last 50 years, a staggering 140 million hectares – the size of almost all the farmland in India — has been taken over by four industrial crops: soya bean, oil palm, rapeseed and sugar cane. And this trend is accelerating.

In the next few decades, experts predict that the global area planted to oil palm will double, while the soybean area will grow by a third.These crops don’t feed people. They are grown to feed the agro-industrial complex.

Other pressures pushing small food producers off their land include the runaway plague of large-scale land grabs by corporate interests. In the last few years alone, according to the World Bank, some 60 million hectares of fertile farmland have been leased, on a long-term basis, to foreign investors and local elites, mostly in the global South.

While some of this is for energy production, a big part of it is to produce food commodities for the global market, instead of family farming.

The paradox, however, and one of the reasons why despite having so little land, small producers are feeding the planet, is that small farms are often more productive than large ones.

If the yields achieved by Kenya’s small farmers were matched by the country’s large-scale operations, the country’s agricultural output would double. In Central America, the region’s food production would triple. If Russia’s big farms were as productive as its small ones, output would increase by a factor of six.

Another reason why small farms are the feeding the planet is because they prioritize food production. They tend to focus on local and national markets and their own families. In fact, much of what they produce doesn’t enter into trade statistics – but it does reach those who need it most: the rural and urban poor.

If the current processes of land concentration continue, then no matter how hard-working, efficient and productive they are, small farmers will simply not be able to carry on. The data show that the concentration of farmland in fewer and fewer hands is directly related to the increasing number of people going hungry every day.

According to one U.N. study, active policies supporting small producers and agro-ecological farming methods could double global food production in a decade and enable small farmers to continue to produce and utilise biodiversity, maintain ecosystems and local economies, while multiplying and strengthening meaningful work opportunities and social cohesion in rural areas.

Agrarian reforms can and should be the springboard to moving in this direction.

Experts and development agencies are constantly saying that we need to double food production in the coming decades. To achieve that, they usually recommend a combination of trade and investment liberalisation plus new technologies.

But this will only empower corporate interests and create more inequality. The real solution is to turn control and resources over to small producers themselves and enact agricultural policies to support them.

The message is clear. We need to urgently put land back in the hands of small farmers and make the struggle for genuine and comprehensive agrarian reform central to the fight for better food systems worldwide.

FAO’s lip service to family farming just confuses the matter and avoids putting the real issues on the table.