The  giant corporations responsible for the climate crisis are also reaping immense profits from the destruction they cause in the poorest communities.

This is the Introduction to “Corporate Conquistadors,” a report released on December 7 by three public interest groups: The Democracy Center of San Francisco, the Corporate Europe Observatory of Brussels and the Transnational Institute of Amsterdam.

Multinational corporations are relentlessly expanding their operations into ever more vulnerable and remote regions of the planet. As they do so they both drive the climate crisis and exacerbate its impacts. They bear responsibility for a global crisis which affects us all, and they bring social and environmental destruction to the local communities where they operate.

A further legacy of their oil drilling, industrial mining and mega hydroelectric projects is the erosion of those communities’ resilience just as the impacts of climate change begin to take effect. These same multinationals are also the biggest barrier to meaningful action on climate change, blocking urgently needed regulations and genuine transformational solutions. 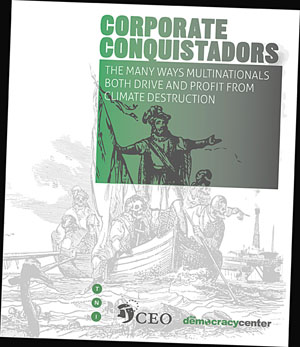 Despite this, corporations are gaining increasing access to climate policy-making spaces, both at national and international level, allowing them to put forward their own so-called “solutions.”

But their market-based techno-fixes are not aimed at tackling the crisis at all. Rather, they allow the biggest polluters to line their pockets with public money while continuing with business as usual. Denouncing the connections between corporations and our decision makers, and de-legitimizing their seat at the table, is crucial if we are to chart a different course.

At the UN climate talks (the UNFCCC), twenty years of negotiating have failed to solve the crisis. This is due, in large part, to the corporate capture of national level government policy and of the UN process itself. In 2014 negotiators will meet in Peru at the heart of one of the world’s regions most vulnerable to climate change and already one of the hardest hit. In the Amazon and the Andes forests are being destroyed, glaciers are melting and climate patterns are changing at an alarming pace. Communities living in these regions are seeing their natural support systems and means of survival irreversibly damaged.

Along with much of the global South the region is subject to huge amounts of economic and political pressure at the hands of corporations, governments and multilateral institutions to expand mining or energy infrastructure projects, with all the accompanying consequences for local people.

In the pages that follow we examine the activities of three powerful European multinationals operating in Peru and Colombia. These cases are emblematic of how corporations drive the climate crisis and use their undue power and influence to obstruct just and effective climate policies while intensifying social and environmental conflicts on the ground:

These are not the only multinational corporations driving climate change with their operations in Latin America, nor the only ones eroding community resilience in the face of climate impacts. But the cases featured here – for their combination of environmental and social destruction and covert political manipulation at national, regional and international level – offer a chilling yet urgent look into the realities of the zero-sum game between climate change and corporate power.

An essential step in stemming the climate crisis is ensuring that these corporate players are nowhere near the negotiating table. A precedent already exists within the UN World Health Organization (WHO) called Article 5.3. It effectively created a firewall between tobacco lobbyists and public health policy-makers in light of the evidence that the interests of the tobacco industry are incompatible with the interests of public health. The interests of these major polluters are in just as blatant conflict with those of climate policy – and the consequences of allowing them to retain such influence will be even more devastating.

The Democracy Center, Corporate Europe Observatory and the Transnational Institute intend this report as a contribution to the ongoing discussions that are strengthening local and transnational struggles against corporate destruction. By focusing on the links between local conflicts and corporate capture of climate policy making, we hope to highlight yet more common ground on which to build international solidarity in the fight for climate justice.