I’ve been meaning to respond to the leftish folks who have been busily demonstrating their ideological superiority by condemning Naomi Klein’s book This Changes Everything as insufficiently revolutionary. My Australian comrade Dave Riley has beaten me to the punch, in this short but eloquent rant, which he has given me permission to post.

Related reading: What ecosocialists can learn from Naomi Klein 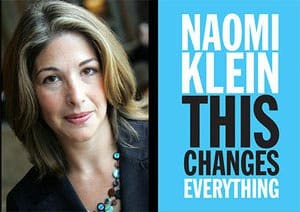 The level of myopia flagged by some of the purists who seek to denigrate Klein’s perspective amazes me.

Asks … that’s its main contribution, given that capitalism is the problem.

That’s the debate, the discussion right there. Now if we have an agreement that the problem is capitalism then we are way way ahead in the green movement — ideologically —  than we’ve been for yonks.

To argue that Klein isn’t up to the task (whereas we Marxists are) merely serves to marginalize the socialist revolutionary left. The fact is that the Marxist left generally is not up to the task because it treats climate change as a sideline issue.

So what does that confront us with, what sort of program do we need to generate and promote?

You gotta have a revolution or else! is not that program. In effect a good bit of that essential program is embedded in Klein’s book. She may skirt some of the DIY but at least she has the guts to argue that we are being screwed because of what is generic to capitalism.

I think Richard Smith’s Climate Crisis, the Deindustrialization Imperative and the Jobs vs. Environment Dilemma is an excellent response to Klein, but even there he is standing on her shoulders, so to speak, and using her POV to advance the discussion.

There’s this whole new discussion opening up that seeks to transcend the social democratic program being proffered by the green parties because these reformist greens are wedded to capitalism. Indeed, the penny is dropping that they are —  or may indeed be — part of the problem and NOT the solution.

Klein’s book is reflective of that.