Rich country advocates of third world population reduction like to present their programs as benign efforts to offer humane support to poor women who want birth control pills or devices but can’t obtain them. It’s all about filling “unmet demand” they say. There may have been abuses in the distant past, but that’s behind us now.

But when we move from the liberal-sounding fundraisers in the North to actual activity in the South, very different pictures emerge. The population controllers are still  imposing their ideology on the very poorest women, denying them choice and control, and killing many. 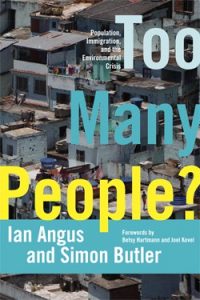 In India, populationism is official government ideology, and campaigns to reduce the number of poor people are official government policy. Government programs pay per capita bounties to doctors who sterilize women en masse. Unsafe operations are performed by ill-trained doctors, using poor equipment in unsterile conditions. So-called health-care workers get just over $3 for each woman they persuade to be sterilized, creating a strong motivation for clinics to process large numbers as quickly as possible.

As Simon Butler and I discussed in Too Many People, when birth control programs are motivated by population-reduction goals, the inevitable result is a focus on meeting numeric objectives and driving up the totals, regardless of the desires or needs of the ‘targets.’

Blackmail, bribery, and coercion target the very poorest women. In India today, women who agree to the operation are paid the equivalent of $23, which is more than most rural women earn in a month — if they can find work at all. As Kerry McBroom, director of the Reproductive Rights Initiative at the Human Rights Law Network in New Delhi, says, “The payment is a form of coercion, especially when you are dealing with marginalised communities.”

Yet another tragedy, caused by just such population reduction programs, is reported this week in the Guardian.

“Eight women have died in India and dozens more are in hospital, with 10 in a critical condition, after a state-run mass sterilisation campaign went tragically wrong.

“More than 80 women underwent surgery for laparoscopic tubectomies at a free government-run camp in the central state of Chhattisgarh on Saturday. Of these, about 60 fell ill shortly afterwards, officials in the state said. …

“The Indian Express daily said the operations in Chhattisgarh were carried out by a single doctor and his assistant in about five hours.”

The death-toll has since risen to ten, and 14 more women are reported to be in serious condition.

This is not an isolated incident. The health ministry admits to paying compensation for 568 deaths resulting from sterilization between 2009 and 2012, a figure that independent observers believe substantially understates the number of women who have actually died to help state officials meet arbitrary population quotas.

Similar programs, with similar results, have killed or maimed poor women on every continent. As David Harvey says, “Whenever a theory of overpopulation seizes hold in a society dominated by an elite, then the non-elite invariably experience some form of political, economic, and social repression.”

Ecosocialists support unrestricted access to all forms of birth control. We defend women’s absolute right to choose whether to use birth control, and which kinds to use, free from all forms of coercion. We oppose birth control programs based on populationist ideology because they consistently violate those fundamental principles.