Book Review: Why opposition to the Alberta Tar Sands is central to the climate justice movement … and how this campaign is transforming activism itself 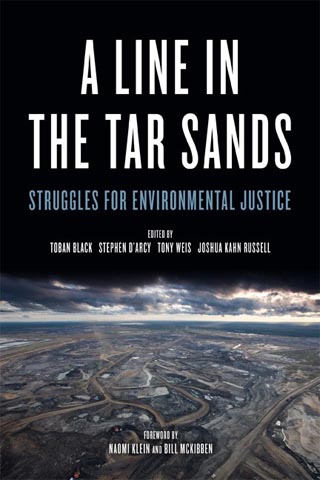 A Line in the Tar Sands: Struggles for Environmental Justice
edited by Stephen D’Arcy, Toban Black,
Tony Weis and Joshua Kahn Russell
(Between the Lines, 2014)

As our governments willingly unleash unprecedented destruction upon the earth through the promotion of extractive industries, and growing mobilizations of climate activists challenge climate emergency, I am reminded of a cautionary warning: “the Owl of Minerva takes flight at dusk.”

This environmental metaphor conveys that the awareness of a historical period only becomes apparent when that era is coming to a close and as we come face-to-face with urgent tasks that need to be addressed.

As if responding to this desperate need to hurry the inauguration of a new historical era, Stephen D’Arcy, Toban Black, Tony Weis and Joshua Kahn Russell, editors of A Line in the Tar Sands, bring together the voices of activists and academics to argue “peoples’ movements will either succeed in transforming our economic and political systems to build a new world, or we will burn with the old one.”

This argument, cemented by Naomi Klein and Bill McKibben stating “the fight over the tar sands is among the epic environmental and social justice battles of our time” in the opening pages, suggests the very active tar sands struggle is no less than a life-and-death battle for the future of the planet.

It is a battle that pits these peoples’ movement against the largest and most destructive industrial project — a project driven by the big the most profitable and powerful transnational energy corporations: ExxonMobile, British Petroleum, Chevron, Royal Dutch Shell, Sinopec.

And, this is a battle on a geological time-scale.

Fossil fuel corporations are digging up carbon that was produced by billions of years of decomposition of organic matter and remained underground through natural processes, permitting life to flourish on the planet’s surface.

In a few short years, this capitalist enterprise has caused a dramatic overburdening, creating massive levels of carbon pollution as waste and a dangerous imbalance increasingly undermining those very life support systems.

And all is driven by crass, class politics.

The tar sands agenda, argues Martin Lukacs, empowers the political machinations of the reactionary Right in Canada. It reinforces a corporate constitutionalism that locks-in trade and investment through bilateral and multilateral agreements that secure investment “certainty” through the engineered collapse of environmental regulatory frameworks.

“In other words,” says Lukacs, “these are not pipelines to build a nation. They are a scheme by which to swindle it.”

Yet, tar sands infrastructure is quickly becoming the heart of a continental fossil fuel circulatory system with bitumen arteries that deliver the life-blood that fuels a global productive metabolism.

To sever those Northern Gateway, Line 9, Trans Mountain, Keystone XL and Energy East arteries, it is argued, would threaten prosperity and the disruption the economic system as a whole.

However, James Hansen, says that “continuing exploitation of the tar sands would amount to ‘game over’ for the climate, as it promise[s] to ensure a range of very dangerous feedback loops [that] would kick in — the so-called ‘runaway’ climate change scenario.”

But, does the battle to sever the tar sands arteries qualify as today’s pre-eminent “urgent historical task that needs to be addressed?”

Yes! A Line in the Tar Sands presents compelling arguments as to why this is the central campaign in the wider climate justice movement and how this campaign is transforming activism itself.

First, the anti-tar sands movement is increasingly influenced by the inclusion of those who are most affected: the frontline communities marginalized by race and/or class. The movement as a whole is thus becoming less middle class, white, male and privileged.

My home is under attack by an industry and by the Alberta and federal governments, which will stop at nothing to get the bitumen from the ground…We are warriors — Mother Earth’s Soldiers…We must follow through for the children and our future. With our boots on the ground, we will persist as we resist the colonial structures that have been forced upon us.

Indigenous activists are, by far, at the leadership of this movement, providing a shrewd political analysis and a spiritual power into the generalized tendency towards despair concerning the large odds activists face.

A large part of the work of movement building was about defending the sacredness of our Mother Earth and helping our peoples decolonize our notions of government, land management, business, and social relations by going through a process of re-evaluating our connection to the sacred.

Second, the environmental and social justice concerns of the anti-tar sands movement are coalescing by drawing connections between neoliberal anti-environmentalism and much broader assaults on democratic processes and institutions. This leads to the deepening of critical stances against business-as-usual approaches of mainstream environmental non-governmental organizations (ENGOs), and harsh denunciations of reactionary environmentalism and false, market-based solutions, argues Ryan Katz-Rosene.

Mainstream environmentalism has recently been and will continue to be schooled in new organizing tactics from frontline activists. Dave Vasey, a grassroots activist in Toronto and active in Environmental Justice Toronto, Occupy Toronto, the Mining Injustice Solidarity Network and anti-tar sands campaigning, relates a specific case of ENGO “interference”:

In addition, [ENGOs] agreed to work with industry to “bridge the gap” between activists and industry, which involved opposing community struggles. Some bridges don’t need to be built, and prioritizing relationships with industry over frontline communities was a critical mistake for ENGOs. This helped industry create the social consent required for public relations, despite widespread opposition by many grassroots and First Nations activists.

More generally, the voice of systematic anti-capitalist and anti-colonial critique leads to an application of strategies and tactics towards more foundational structures through what Stephen D’Arcy calls “secondary targeting.”

The climate justice movement will continue to radicalize and abruptly challenge the priorities of capital. It will confront the traditional environmental movement as well as Left politics as it forges a new constellation of political forces concerned with Indigenous rights and title, migrant rights, labour rights and the rights of nature.

The climate justice movement, to which this volume adds an essential contribution, is at the forefront of revolutionary politics because it is birthed at the nexus of critical contradictions in the planet’s society/nature metabolism. The multiple voices in this volume are expressions of this wide historical planetary praxis, nature becoming conscious of itself.

A Line in the Tar Sands should be read by activists and theorists alike. It will assist the movement in moving forward.

Brad Hornick is a perpetual student now doing a Ph.D. studying the relationship of climate science to political activism. Check out his blog on rabble for more of his writing and follow him on twitter @bradhornick. This review was first published in Rabble, October 2, 2014