The debate continues: Is ‘Buen vivir’ an effective and just development alternative to mining and resource extraction industries in Latin America? 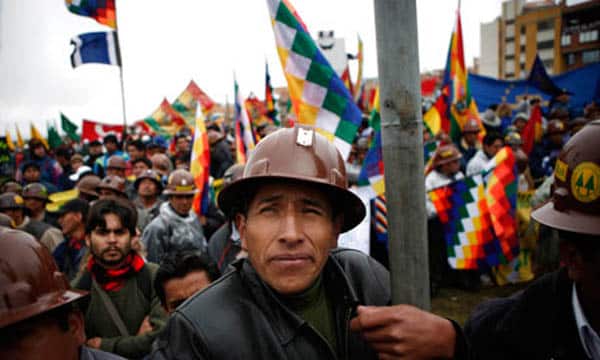 In The dangerous myths of ‘anti-extractivism’, published last week in Climate & Capitalism, Federico Fuentes argued that environmentalists who oppose ‘extractivism’ on principle are oversimplifying the complex issues faced by the peoples and governments of Latin America today.

“There are ongoing debates over how successful left-wing governments in places such as Bolivia, Venezuela and Ecuador have been in achieving their stated aims — and the problems in pursing a development model that continues to rely on extractive industries.

“However, framing the debate as one between proponents and opponents of extractivism ignores the fact that almost no one proposes closing down all extractive industries, particularly in light of the devastating impact it would have on the peoples and economies of South America.”

Readers Phil Ward and Peter Gose submitted thoughtful comments on the article, and Federico Fuentes responded. Those exchanges are in the Comments section below the original article.

We have received two other submissions that are too long to appear as Comments. Since they add important points to the debate, and both deal with the complex issue of the ‘Buen Vivir’ philosophy and its relationship to economic development in the Andes, we have decided to make both available in PDF form.

Re-contextualizing Anti-Extractivism:
Buen Vivir and the New Left in the Andes
by Matt Ford

Matt Ford is a graduate student in the History Department at California State University, Fresno who has travelled extensively in the Andean region. He disagrees with Fuentes, arguing that “extractive industries rarely—if ever—better the lives of communities. Most often, they destroy indigenous and subsistence cultures and replace them with a destructive, non-harmonious western culture of mining or oil.” Fuentes, Ford says, fails to understand that “‘anti-extraction’ is not merely an ‘anti’ movement, but part of the larger philosophy of Buen Vivir. At the heart of Buen Vivir is a critique of western modernity and development, both of which are absent from Fuentes’ article.”

Good Living for Whom?
Bolivia’s Climate Justice Movement and the Limitations of Indigenous Cosmovisions
by Nicole Fabricant

Nicole Fabricant is an Assistant Professor of Anthropology at Towson University in Maryland. She is currently studying movements to overcome water scarcity in El Alto, Bolivia. She argues that moving beyond ‘extractivism’ in the South does not seem like a real possibility in Bolivia, which is deeply dependent upon resources like natural gas.  Fabricant says that essentialized indigenous constructs such as Buen Vivir, detached from political and economic realities,  can be easily commoditized and used to advance corporate and rightist agendas.

As always, your thoughts and comments are more than welcome.