Via Campesina condemns right wing efforts to destabilize Venezuela and reverse the immense achievements of the Bolivarian Revolution.

Via Campesina condemns right wing efforts to destabilize Venezuela and reverse the immense achievements of the Bolivarian Revolution. 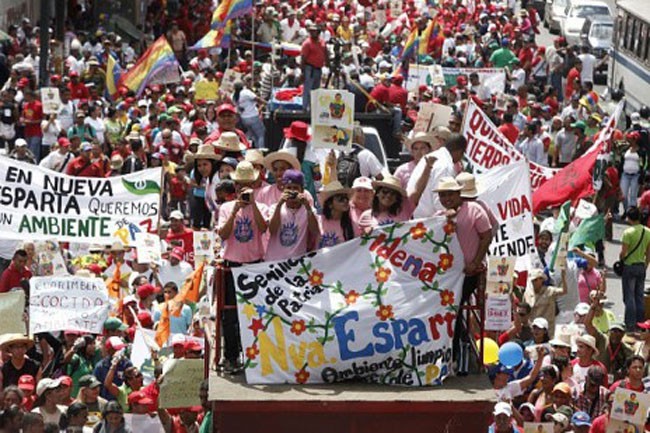 On March 30, thousands of environmentalists marched in Caracas to show their support to the Bolivarian government and its environmental protection policies, against the right wing assaults. The marchers were addressed by President Maduro, who called for strengthening ecosocialist consciousness and announced the foundation of an ecosocialist school.

Statement adopted by the International Coordinating Commission of the Via Campesina International, meeting in Managua, March 29, 2014

We, Vía Campesina International, the international peasant movement that brings together over 200 million families in 77 countries, express our solidarity with the Venezuelan people, their peasant movement Bolivarian Revolution – currently the victim of an imperialist crusade that, together with reactionary right-wing forces, conspires within Venezuela and abroad in an attempt to retake the power they lost legitimately, democratically, and repeatedly at the ballot box.

Those of us who struggle for social justice, land reform, and food sovereignty consider the Bolivarian Revolution a reference for social transformation and inclusion. As women, youth, rural workers, fisherfolk, indigenous peoples, and migrants, we reject all media-backed attempts at coup d’ états that look to place into the collective imagination a set of demonstrators that are frustrated with the consequences of an economic war being imposed on Venezuela by powerful oligarchical, fascist, and imperialist sectors, all aimed at destabilizing the government of President Nicolás Maduro.

Since the physical loss of President Hugo Chavez, leader in the Latin American integration process, the North American empire and its allies in the region have underestimated the courageous Venezuelan people.

The imperialists wrongly think that by using physical, economic and media violence they can took back the clock and once again dominate a region that now has important spaces of integration, such as ALBA, UNASUR and CELEC, among others.

It is no coincidence that the attempted destabilization is taking place only a few days after the successful conclusion of the CELAC summit in Havana, and one year before the Bolivarian Republic of Venezuela takes on the presidency of the Moviment of Non-Aligned Countries.

It is in this context that the Via Campesina International, with hundreds of thousands of women and men organized in the Latin American Coordination of Rural Organizations (CLOC), we will continue to mobilize ourselves in defence of the processes of transformation and struggle that Latin American peoples are building.

We are conscious of the fact that powerful transnational interests are looking to revert the advances that have been achieved by the Bolivarian Revolution and its peasant movement — including an agrarian reform that has permitted the democratization of land access for thousands of peasant and indigenous families, and that at the same time has resulted in important increases in national food production, the cultural recuperation and promotion of traditional agroecological practices, access to credit, marketing, among others — we reaffirm our commitment to the Ezequiel Zamora National Peasant Front (FNCEZ) and the Ezequiel Zamora National Agrarian Coordination (CANEZ), member organizations of the Via Campesina International in the sister republic.

These organizations’ struggle for land, food production by and for the Venezuelan people, and the consolidation of peoples’ power in the countryside is also our struggle.

Finally, we manifest our unconditional commitment to and solidarity with the peoples’ cause and the Bolivarian Revolution, sure that the efforts of the corporate-owned media — to manipulate public opinion and minimize the advances of the organized people of Venezuela — will not succeed. We will continue united and on our feet in struggle with our sister people and her struggle to defend her social achievements.