EXCLUSIVE: Climate and Capitalism is proud to republish a long unavailable pamphlet that introduced the coming together of greens and reds in comic strip form, in 1980. 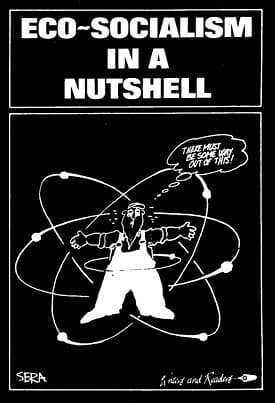 EXCLUSIVE: Climate and Capitalism is proud to republish a long unavailable pamphlet that introduced the coming together of greens and reds in comic strip form, in 1980.

The usually reliable Oxford English Dictionary says the first English-language appearance of the word “eco-socialism” was in the London Times in 1985, as a translation of the German ökosozialismus.

The OED is wrong.

Five years earlier, in 1980, the Socialist Environment and Resources Association, an affiliate of the British Labour Party, published a pamphlet titled Eco-Socialism in a Nutshell.

Today it is very rare, but this summer I found (and paid an exorbitant price for) one copy from an antiquarian book dealer in England. Unfortunately, it had been much read, and as a result was not suitable for scanning.

Fortunately, there’s this thing called the Internet. After some searching, I found Stan Rosenthal, who arranged the original publication for SERA, and wrote the Introduction. He not only wholeheartedly endorsed the idea of republishing it, but he provided background on the pamphlet, and he still had a mint-condition copy, which he very kindly gave me.

The 1980 pamphlet used text and cartoons from the book Nuclear Power for Beginners, published in 1978 by Writers & Readers Publishing Cooperative, so the word eco-socialism was being used in English at least that early. Writers & Readers no longer exists, but the rights to its publications were taken over by the Connecticut based publisher For Beginners LLC: they have kindly given Climate & Capitalism permission to post it.

So here it is – an historic document of ecosocialism. In some ways, Eco-Socialism in a Nutshell shows how new and under-developed the concept of eco-socialism was in 1980. But there is much in it that today’s movement can learn from, especially its insistence on a class approach to the environmental crisis.

As the Leeds Other Paper wrote of this pamphlet in 1980, “it is quick and easy to read” – and, as a columnist in The Guardian wrote, “this is a serious attempt to popularize ideas which ought to be in the mainstream of political debate.”