Ian Angus reviews ‘Recovering Bookchin’ — An important book on the anarchist environmentalist that redeems his reputation and provides an invaluable overview of the political project he called social ecology. 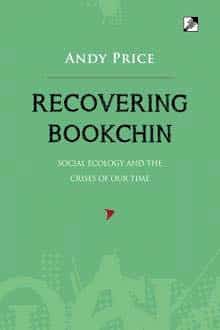 In June 1987, long-time anarchist and environmental activist Murray Bookchin was keynote speaker at the first national meeting of U.S. Greens in Amherst, Massachusetts. Before he spoke, Bookchin placed a copy of a long article he had just written on every seat. In the article and in his talk – both titled “Social Ecology versus Deep Ecology: A Challenge for the Ecology Movement” – Bookchin described “two conflicting tendencies” in the environmental movement.

On one side, “deeply concerned naturalists, communitarians, social radicals and feminists” were challenging the “hierarchical, sexist, class-ruled” society responsible for environmental destruction, and developing a “coherent, and socially oriented body of ideas that can best be called social ecology.”

On the other side, “barely disguised racists, survivalists, macho Daniel Boones, and outright social reactionaries” were directing fire at “a vague species called humanity – as though people of color were equatable with whites, women with men, the Third World with the First, the poor with the rich, and the exploited with their exploiters.” Drawing on the mystical deep ecology philosophy formulated by “privileged white male academics,” they “preach a gospel that humanity is some kind of cancer in the world of life.”

Bookchin was particularly outraged by a recent interview in which deep ecology advocate and EarthFirst! leader Dave Foreman said that famine in Ethiopia was caused by overpopulation, and the best solution would be “to let the people there just starve.” He also pointed to Foreman’s opposition to immigration from Latin America, and to an article in which another EarthFirst! leader hailed the AIDS epidemic as an effective way to reduce population.

If such views were allowed to go unchallenged, Bookchin said, “the ecology movement will become another ugly wart on the skin of society.”

“Deep ecology, with its Malthusian thrust, its various centricities, its mystifying Eco-Ia-Ia, and its disorienting eclecticism degrades this enterprise into a crude biologism that deflects us from the social problems that underpin the ecological ones and the project of social reconstruction that alone can spare the biosphere from virtual destruction.”

Bookchin’s article and speech caused an uproar. EarthFirst! activists  and academic deep ecologists joined in an all out battle to repel one anarchist critic. In articles and speeches and back rooms, Bookchin was accused of waging an ideological turf war, of attacking real environmentalists because he was jealous that they were winning support while he was not. He was portrayed as a bitter, dogmatic and sectarian old man who only wanted to control the green movement and was determined to destroy everyone who disagreed with him. The poet and deep ecology theorist Gary Snyder said he  “writes like a Stalinist thug.”

That caricature stuck. Bookchin’s ideas were dismissed as “hasty generalizations, ad hominem fallacies, flimsy slippery-slope arguments, and outright nonsense,” and he himself was effectively read out of the green movement. He was much too radical for the mainstream NGOs, and much too politically principled for the lifestyle and direct action greens.

In Recovering Bookchin, Andy Price defends Bookchin, arguing that the attacks on him were unjustified, and that Bookchin deserves to be seen as a profound political thinker who offered a coherent practical and theoretical response to today’s social and ecological crises.

He is entirely successful in the first argument. Price shows conclusively that Bookchin’s critique of deep ecology was based on real problems in that current’s ideology and pronouncements, and that his opponents, apparently unable to reply effectively to his ideas, resorted to personal attacks with no basis in reality. It was they who were engaged in a turf war, treating all criticism as illegitimate. Recovering Bookchin is worth reading just for its rehabilitation of Bookchin’s reputation, and for its exposure of his deep ecology critics as dishonest and shallow.

Price’s account of Bookchin’s theoretical views is also important – he explains Bookchin’s views clearly, while giving a fair account of the disagreements raised by serious critics. The result is an invaluable overview of the political project Bookchin called social ecology.

But is it a “coherent project that can offer a genuine opposition to the irrationalities of capitalism,” as Price concludes? I’m not convinced.

Bookchin began his political life as a member of the Young Communist League in the 1930s. Expelled in 1939 for opposing the Stalin-Hitler Pact, he joined the Trotskyist Socialist Workers Party, then left it in the late 1940s to join a tiny libertarian Marxist group led by a former  leader of the German Trotskyists, Josef Weber. Bookchin left that group in the mid-1950s, but historian Marcel van der Linden has shown that many of the core ideas in the book that made Bookchin’s reputation as an anarchist theorist, Post-Scarcity Anarchism (1971), originated with Weber.[1]

Price says nothing of this, preferring to analyse Bookchin’s later works on their own, without reference to influences. That obscures the extent to which Bookchin’s lifelong project was an effort to develop an anarchist body of thought as a coherent alternative to Marxism. The difficulty he faced – and this can be seen through a careful reading of Price’s book – is that while he retained much of what he learned as Marxist, he tried to combine it with the liberal moralism and individualism that defines anarchism. The result was anything but coherent, because while Marxists and left-anarchists have much in common, their basic philosophies are ultimately incompatible.

Bookchin accepted Marx’s analysis of capitalism, which is based on a rigorous materialist explanation of exploitation and class struggle. But he considered those issues as secondary to “hierarchy” and “domination,” which he believed preceded class society and would not be eliminated by socialism. In his theory, old men in hunter-gatherer societies used their accumulated knowledge to claim a superior position and a share of the food they were no longer able to help the group to obtain. When agriculture was invented, the domination of old men evolved into class rule, but hierarchy, not class, remains the principal problem.

Despite the fact that they are central to all his thought, Bookchin didn’t offer any materialist definition of hierarchy and domination. Nor could he: they are ahistorical ethical concepts, not materialist social analysis. His use of them in his idiosyncratic account of prehistory – a dominant social layer defined by age, whose power resulted from weakness! – was purely speculative, based on no credible evidence.

Bookchin also tried to use evolutionary theory as a materialist base for his ecological-anarchist ethic. He argued that evolution is directional, that nature has progressed “from the ever-greater complexity and variety that raises sub-atomic particles through the course of evolution to those conscious, self-reflexive life forms we call human beings.” That assumption is questionable in itself,[2] but Bookchin took it into a clearly idealist (i.e., non-materialist) direction, claiming that “life is self-directing in its own evolutionary development,” and that evolution was moving towards ever-increasing individual freedom. Price quotes him:

“[t]he possibility of freedom and individuation is opened up by the rudimentary forms of self-selection, perhaps even choice, if you will, of the most nascent and barely formed kind that emerges from the increasing complexity of species and their alternate pathways of evolution. Here, without doing violence to the facts, we can begin to point to a thrust in evolution that contains the potentialities of freedom and individuation.”

Actually he was doing enormous violence to the facts. When he wrote in 1990 that ‘‘humanity actualizes a deep-seated nisus in evolution toward self-consciousness and freedom’’ and that this provides ‘‘the grounding for a truly objective ethics,’’ Bookchin had replaced materialism with a speculative and teleological mysticism comparable to the deep ecology ideology he had criticized so effectively three years earlier.

In the last years of his life, Bookchin abandoned anarchism for what he called “libertarian municipalism,” a utopian project that aimed to win one neighbourhood or town at a time to a form of direct democracy. The man who had once written that “decentralism, small-scale communities, local autonomy, even mutual aid and communalism are not intrinsically ecological or emancipatory,” now told us that the way forward was local meetings in which “Workers of different occupations would take their seats in popular assemblies not as workers … but as citizens, whose overriding concern should be the general interest of the society in which they live.” (emphasis in original)

It’s hard to imagine a clearer statement of the distance Bookchin had travelled, not only from Marxism, but also from class-struggle anarchism.

Despite my political disagreements with anarchism and my criticisms of his philosophy, Bookchin is one of my heroes. He devoted his life to the cause of the liberation of humanity. Much of his writing on society and ecology was brilliant, and deserves to be read carefully by ecosocialists and everyone else who realizes that we can only save the world by radically changing society.

While his efforts to enunciate a coherent revolutionary worldview didn’t succeed, at least he tried – in contrast to the shallow thinkers who resorted to insults instead of reason. He’ll be read and remembered when their books just gather dust.

That’s why Recovering Bookchin is an important book. It’s less critical than it could be, but it is nevertheless an impressive effort to rehabilitate Bookchin’s reputation, and to make his views accessible to a new generation of left-green activists.

[1] Marcel van der Linden. “The Prehistory of Post-Scarcity Anarchism: Josef Weber and the Movement for a Democracy of Content (1947-1964).” Anarchist Studies 9.
[2] In Full House (New York: Harmony Books, 1996) Stephen Jay Gould argued persuasively that this commonly-held view is entirely mistaken: what seems to be evolution towards complexity is actually an increase in variability. Since the first living things were single-cells, variation could only mean an increase in the number of cells per being – but unicellular bacteria are still the most common and most successful life form on earth. Human beings are not the goal of evolution: we’re just the latest multi-cellular variation.