Two articles identify the root cause of Canada’s worst train disaster: a system that always puts profit before people.

Two articles in the UK Guardian identify the root cause of Canada’s worst train disaster: a system that always puts profit before people. 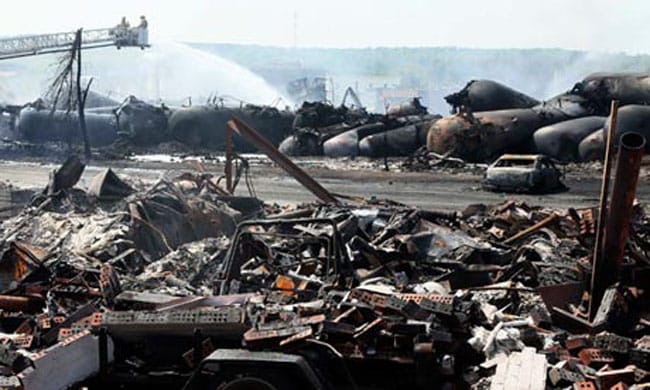 NOT JUST TRAGEDY, BUT CORPORATE CRIME
At the root of the explosion is deregulation and an energy rush driving companies to take ever greater risks

Five days after a train carrying crude oil derailed and exploded in Lac-Mégantic, Quebec, the rural town resembles a scene of desolation. Its downtown is a charred sacrifice zone. 50 people are likely dead, making the train’s toll one of the worst disasters in recent Canadian history.

In the explosion’s aftermath, politicians and media pundits have wagged their finger about the indecency of “politicising” the event, of grappling with deeper explanations. We can mourn, but not scrutinise. In April, prime minister Stephen Harper even coined an awkward expression – “committing sociology” – to deride the search for root causes about horrifying events, in the wake of an unrelated, alleged bombing attempt.

But to simply call the Lac-Mégantic explosion a “tragedy” and to stop there, is to make it seem like an accident that occurred solely because of human error or technical oversight. It risks missing how we might assign broader culpability. And we owe it to the people who died to understand the reasons why such a disaster occurred, and how it might be prevented in the future.

So here’s my bit of unwelcome sociology: the explosion in Lac-Mégantic is not merely a tragedy. It is a corporate crime scene.

The deeper evidence about this event won’t be found in the train’s black box, or by questioning the one engineer who left the train before it loosened and careened unmanned into the heart of this tiny town. For that you’ll have to look at how Lac-Mégantic was hit by a perfect storm of greed, deregulation and an extreme energy rush driving companies to ever greater gambles with the environment and human life.

The crude carried on the rail-line of US-based company Montreal, Maine and Atlantic Railway – “fracked” shale oil from North Dakota – would not have passed through Lac-Mégantic five years ago. That’s because it’s part of a boom in dirty, unconventional energy, as fossil fuel companies seek to supplant the depletion of easy oil and gas with new sources – sources that are harder to find, nastier to extract, and more complicated to ship.

Like the Alberta tar sands, or the shale deposits of the United States, these energy sources are so destructive and carbon-intensive that leading scientists have made a straightforward judgment: to avert runaway climate change, they need to be kept in the ground. It’s a sad irony that Quebec is one of the few places to currently ban the “fracking” used to extract the Dakotan oil that devastated Lac-Mégantic.

But fossil fuel companies, spurred by record profits, have deployed a full-spectrum strategy to exploit and carry this oil to market. That’s one of the reasons for a massive, reckless increase in the amount of oil shipped by rail. In 2009, companies shipped a mere 500 carloads of crude oil by rail in Canada; this year, it will be 140,000.

Oil-by-rail has also proved a form of insurance against companies’ worst nightmare: a burgeoning, continent-wide movement to block pipelines from the Alberta tar sands. A group of Canadian businessmen is pursuing the construction of a 2,400-kilometre rail line that could ship 5m barrels of tar sands oil from Alberta to Alaska. Companies are also trucking it and entertaining the idea of barging it down waterways. This is the creed of the new energy era: by any means necessary.

The recklessness of these corporations is no accident. Under the reign of neoliberalism over the last 30 years, governments in Canada and elsewhere have freed them from environmental, labour and safety standards and oversight, while opening up increasingly more of the public sphere for private profit-seeking.

The railway in Canada has hardly been exempt. Up until the mid 1980s, the industry, publicly-run, was under serious regulation. By the time the Thatcherite Progressive Conservative prime minister Brian Mulroney was finished with his reforms, it was deregulated, and companies had rewritten the safety rules. That launched an era of cost-cutting, massive lay-offs, and speed-ups on the job, and eventually, the full privatization of companies and rail-lines.

The Liberal government completed the job by turning over what regulation remained to rail companies themselves. A report issued in 2007 by a safety group spelled out the result: Canada’s rail system was a disaster in the waiting.

It’s little wonder, then, that today’s oil and rail barons have cut corners with ease. They’ve been using old rail cars to ship oil, despite the fact that regulators warned the federal government they were unsafe, as far back as 20 years ago. A more recent report by a federal agency reminded the government that the cars could be “subject to damage and catastrophic loss of hazardous materials.” All were ignored. To top it off, the federal government gave the go-ahead last year to Montreal, Maine and Atlantic Railway to operate with just one engineer aboard their trains.

All of which means it will not suffice to find out if a brake malfunctioned the night of the disaster, or limit ourselves to pointing at the failings of lax regulation. The debate should be about the need for another kind of brake, over the mad pursuit of infinite resources, and the unshackling of reckless corporations, on a finite and fragile planet.

Canada’s political class will not be pleased by the lessons to be drawn. The government needs to get back into the business of heavily regulating corporations – through incentives, through taxes, and through sanctions. And this will involve not just grappling with the dangers of the transport of oil – which will remain unsafe, whether by rail or by pipeline – but starting a rapid transition away from an extreme energy economy entirely. That will not happen as the result of any government inquiry, but a noisy social movement that puts it on the public agenda.

That’s why the most fitting response to Lac-Mégantic actually happened two weeks ago, by US residents 100 miles across the border in Fairfield, Maine. They were arrested blockading a train carrying the same fracked oil from the same oilfields of Northern Dakota, to the same refinery in New Brunswick, Canada. Their message was about ending our reliance on oil, not soon but now. For those who never knew the victims of Lac-Mégantic, there could be no better way to honour them.

The fireball in Lac-Mégantic, Quebec, flashed around the world last week as a very hot news item. Thirty-five people are now confirmed to have been killed, with 15 more still missing and presumed dead, as a result of the explosions of crude oil carried by the Montreal, Maine and Atlantic Railway’s runaway freight train. When Canadian prime minister Stephen Harper quickly showed up to offer his condolences, this also made international news, including the Guardian.

What has not received quite as much international attention as it has here in Canada, is what has since been revealed about Transport Canada, the federal government regulator of the railway industry which decided only last year to allow MM&A to run each train with only one engineer.

Amidst all the apportioning of blame – and there is plenty enough to go around – our sober attention must also turn to what this appalling incident, like the terrible Bangladeshi textile factory fire just over a month ago, tells us about the dark side of competitive markets, and the complicity of governments committed to facilitating their spread around the world.

The ugly logic underlying this tragedy was starkly revealed by Ed Burkhardt, the president and CEO of the MM&A railway’s parent company, Rail World Inc, in an interview on CBC television on 9 July, the day after Harper visited the devastated town. The fundamental reason the train wasn’t being overseen on that now-infamous night, he averred, was that the 2% higher labour costs entailed in hiring more workers to guard their trains would lead to a company raising their freight rates to compensate by 2%, which would result in it losing the business to some other company that wasn’t paying for workers to guard their trains. However callous this sounds, he spoke nothing less than the truth when he added: “That’s the way it works.”

The “it” here is our market-driven capitalist world. As Burkhardt explained, the largest corporations in the freight train industry compete with each other by outsourcing the more accident-prone operations to smaller companies with low profit margins. And these smaller companies compete in a world where one-man train operations have become the norm in other countries. “If you go overseas, almost everybody has one-man crews”, he said. “Go to the UK, they are running 100 freight trains and 10,000 passenger trains every day with one-man crews.”

The players in this world are not only the businesses that compete in it, big and small, but also the politicians of every stripe who promise to get governments off their backs to help them do so. This should once and for all be understood as an offer to carry business on the backs of governments. They have authored the free trade agreements whose key provisions are designed to leverage the sorts of regulations that promote competitiveness from one jurisdiction to another. And they have appointed people to regulatory bodies who sustain the logic of competitiveness.

At the heart of the competitive logic behind “this is the way it works”, in this instance as in so many others, was the reduction of the number of workers to save labour costs. In the 1970s, North American freight trains usually carried five-man crews around the clock. As crew sizes shrank over the following decades, the effect of this downsizing, in turn, was to have more workers competing for jobs, which of course drives down wages – including, eventually, those of the one person left running the train.

This is not an unintended consequence of competitive markets. It is their purpose.

One can be sure that the case made to Transport Canada for permission to run a one-man crew made reference to the common use of one-man train crews in the UK. The integrated nature of global capitalism today means that so long as people in one place buy into the peddlers of the logic of competitiveness, they become inadvertently complicit in the uses made by it by the peddlers of it elsewhere.