Driven from their farms by climate change, brickworkers near luxurious Kathmandu are dying slowly in an air pollution disaster zone

Driven from their farms by climate change, brickworkers near luxurious Kathmandu are dying slowly in an air pollution disaster zone 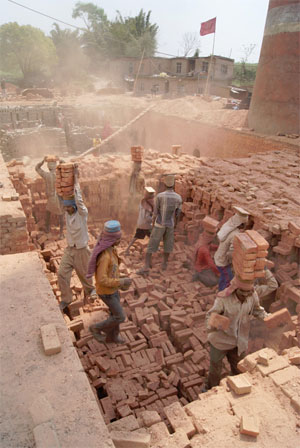 Stephen Bailey, a UK newspaper journalist for 10 years, is currently taking a career break in Nepal.

From a hill over Duwakot you can see people labouring in the grey mud beneath the towering chimney. Down in the factory you can see the weather-beaten faces, deformed hands, and gruelling work in terrible conditions.

There are factories like this all over Nepal’s Kathmandu Valley, which has become an air pollution disaster zone. The people who work in them are impoverished farmers from the rural parts of Nepal, working here for six months of the year.

Many of their farms have been affected by water shortages and rising temperatures which research has linked to climate change. They are being driven to work in factories that are belching out pollution which is contributing to that very problem.

The Duwakot factory in Bhaktapur district is typical. Locals said it has been there for around 18 years. The workers in the factory’s brick making area were from around Kavre, a drought hit area just east of the capital Kathmandu, but a world away from its shopping malls and designer shops.

One family of four said they could make 2,000 bricks a day, earning around 1,200 rupees (£9). Their working day started around 2-3am and finished at sunset. Their homes were tiny one-room brick shacks, with no electricity, hearing or toilets. It is warm now, but in winter night-time temperatures are below zero.

They were aware this was a polluted area but it was simply not a major concern given their other struggles. In years to come they will feel the effects. In Kathmandu, respiratory problems occur at 12 times the national average.

The greatest concentration of brick factories is around Bhaktapur, seven miles away. A survey found 74 kilns in the Bhaktapur district, all feeding the valley’s rapid population growth.

Over at the brick firing area, dozens of migrants from the flat, southern Terai region were carrying 10-14 finished bricks at a time on their heads to waiting trucks. These men and women spoke little Nepali and looked similar to Indians – darker skinned and leaner than Nepal’s hill dwellers.

Choking dust and fumes swirled in the air as they shuttled backwards and forwards. Overhead the chimney was smoking gently.

The homeland of these workers is also experiencing a changing climate. People are reporting the monsoon is starting up to two weeks late, increasing the number of drought days, when the land is stony hard and barren.

Nepal as a whole has been categorized as the 4th most vulnerable country in the world due to climate change. The rainfall pattern is said to be changing and temperatures are rising by 0.6ºC a year.

Despite the factories the vast majority of the pollution driving climate change comes from the developed world. Australia, for example, still produces 164 times as much greenhouse gas per person as Nepal.

In Bhaktapur, the factories use low quality Assam coal. The chemicals they give out are linked to health problems from low birth weight, to lung disease, to stunted cognitive development.

Dr. Ram K Chandyo from Kathmandu’s Institute of Medicine has been studying child development in Bhaktapur for many years and wants to carry out research on the children in the factories. His office is based in Siddhi Memorial Hospital, an NGO run hospital which gives free charity care to many brick factory children.

Just past the chimney of the Duwacot factory, at a nearby water source some, several young female workers were taking the day off.

Sapana and Anita, both 15, were from Rolpa, a poor and mountainous areas to the west, which was a heartland of the decade long Maoist insurgency which finished in 2006. They had left their families to work here. Dr Ram said they may now be the principal earners in their families.

Many Nepali girls are also trafficked to brothels in India, and Dr Ram said girls in situations like this would be more vulnerable to that kind of exploitation.

The girls giggled when asked about their future. Both have had offers of training in tailoring in their villages.

Despite efforts to educate people, most ordinary Nepalis know little about climate change. One local journalist interviewed more than 100 people and found none had even heard the term. Few knew if there was a ministry of the environment.

Sapana and Anita did not know the names of any chemicals that might be coming from the factory above them. Yet these are the chemicals which may help devastate their country’s environment, and may one day kill them.