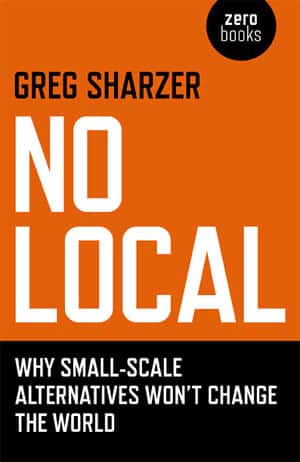 Against a backdrop of global climate disasters, financial panics, and inequality, localism — the creation of small-scale local systems of production and distribution — seems to make sense. Start small and stay close to home; forge community ties, grow your own food locally, and create alternatives that can eventually replace the current system of global capitalism with a sane, sustainable way of life. By providing this alternative, the local will overwhelm global capitalism. Death by a thousand cuts. But can the power of global capitalism be undone through establishing bike paths, cooperatives, bartering, alternative local currencies, community gardens, and small businesses?

Greg Sharzer’s well-researched book, with the unfortunate title No Local, argues no. Localism is incapable of displacing capitalism or even effectively challenging it because it fails to understand how capitalism works. “It sees the effect of unbridled competition, but not its cause.” By failing to understand how profit drives production, localism is blind to the pressures capitalism applies to its proposed remedies, which rely on the market or involve time and money that most working-class people don’t have. More utopian ideology than political framework, and too often served with a dose of moral superiority, localism never adequately explains by what magic small businesses or collectives can eclipse giant corporations.

Threads from localist authors, stretching back to Marx’s contemporary Pierre Proudhon and forward to modern authors like Barbara Kingsolver, Bill McKibben, Carlo Petrini, Michael Shuman, and E. F. Schumacher are scrutinized in constructive ways to highlight the profound gaps in their utopian remedies. No Local also shines a light on the often-neglected issue of class in the environmental movement.

The title is a nod to fellow Canadian Naomi Klein’s influential No Logo, published in 1999 and highly popular in the global justice movement. Despite the categorical title, Sharzer is not condemning the benefits of local action, but pointing out localism’s inadequacies and contradictions as a model of social change. Beyond Local might have better conveyed the book’s central message. Regardless, anyone who has encountered or explored the politics of localism must read this book. We are living through an unprecedented environmental crisis that requires a global solution of historic proportions. We must reexamine all of localism’s assumptions and place the environmental and social justice movements on a stronger theoretical foundation if we are to mount a serious, viable defense of the planet.

No Local begins with a brief history of capitalism and a cogent explanation of its inner workings, centered on Marx’s labor theory of value. Localism seeks a return to a preindustrial economic model that romanticizes small-scale production. But simplicity and smaller scale will not get rid of the social relations that underlay capitalism. Equal exchange and bartering don’t address the theft inherent even in small-scale capitalism, where workers are still paid less than the exchange value of the things they create, no matter the scale of production. Localists confuse use value and exchange value, forgetting that capitalism prioritizes profit (value) over human need (use value). By ignoring this question, localism leaves the question of exploitation unanswered and fails to root out the capitalist dynamic- accumulation for accumulation’s sake-that leads us to our current dilemma.

Sharzer insists that localism ends up apologizing for capitalism:

“For Marx, this is more than just false: it ‘is accepting the present state of affairs; it is, in short, making an apology… for a society without understanding it.’ Unfortunately, any apology for capitalism gets in the way of finding real solutions. . .. [E]conomists who accept the market always end up back where they began: at an ideal capitalism, with its ugly contradictions hidden behind visions of social harmony. This has a long history.”

Sharzer distinguishes between promarket and antimarket versions of localism. Promarket localism supports local businesses over their global competitors and urges lower rates of consumption. It accepts the market as a permanent feature of life and hopes that small-scale production will, over time, eradicate our current ills. These promarket assumptions are based on the interests of the middle class and small-business owners threatened by corporate competition.

The reality is that no hard line exists between the local and the global. While small may be beautiful for some business owners, it certainly isn’t for most employees, or even the environment.

Locally spent money doesn’t necessarily stay in a community. Business is reliant on tools and equipment made abroad. The cash register, computer, and industrial oven at your local bakery were probably not made down the road. Money might stay in the community for a cycle or two, but quickly moves on. Small-scale local production is usually less efficient and thereby less profitable, which is why small businesses pay only two-thirds of the wages of companies with more than five hundred employees, and often don’t offer health insurance. In addition, 83 percent of US small-business owners in a 2010 study were older, married, white men. One UK study cited by Sharzer concluded that small businesses are the least likely to “safeguard the environment.”

A pillar of promarket localism is the concept of ethical consumption. The idea is that if “consumers buy locally-sourced goods from ethical sellers”-for example, organic produce-“they’ll shrink the economy to a more rational, sustainable level.” A select group pays more for products, propping up businesses that the market would otherwise devour. This doesn’t challenge the market mechanism, nor does it address the question of the means to ethically produce adequate food for the billions who go hungry on the planet and cannot afford to pay more.

The antimarket localists focus on democratic, decentralized, prefigurative communities and methods of production. While anticapitalist, these small-scale experiments don’t realistically challenge capitalism. Antimarket localism’s greatest weakness is the assumption that everything society needs can be produced locally. It fails to address the complexities of modern production and distribution, romanticizing feudalism and precapitalist societies.

A planet with seven billion people and one billion Facebook accounts should never go back to bartering, surviving on grain and root vegetables all winter, or making our own clothes, except for our own individual amusement. Modern humans under capitalism have created an incredibly complex, specialized system of production and distribution. Rather than casting aside modern methods of production and distribution, they should be recast based on human priorities. That requires a difficult, head-on confrontation rather than the fantasy of communes gradually supplanting capitalism.

Both pro and antimarket localism seek to limit technology and transportation, which are seen as energy inefficient. But local food production might not reduce energy inputs. Growing and storing food in colder climates can often use more energy than needed for transportation. As Sharzer notes, 83 percent of food-related carbon emissions come from the production of food, while only 11 percent is due to transportation.

The political orientation of the localists is essentially that of the middle class-defined by Sharzer not only as shopkeepers and other owners of small businesses, but also professionals, “junior executives and office workers” whose mode of work encourages aggressive individualism. Because of their investment in the status quo, the progressive petite bourgeoisie avoids class conflict and longs for social peace. They are drawn to individual actions over collective responses. They look to consumption as the way to express social power rather than class location. They prioritize lifestyle choices, emphasizing morality and selfrestraint. Rather than aiming their fire at the corporations and the US military-industrial complex, they blame the individual consumer. We should stop shopping at Walmart and driving SUVs. Volunteer and strengthen your local community, buy organic food and a Prius. The end result is a narrow, cultural escape built inside the walls of capitalism.

The alternative is class struggle. Sharzer defends Marxism’s orientation on confronting crises, exploitation, and oppression through collective action as the key process by which people gain the knowledge to transform the world and themselves. Struggle can be local or global. Sharzer’s point is that such struggles must be confrontations- one class against another-that pose a challenge to the system rather than localism’s polite resistance, which is like a mosquito biting an elephant.

This review was first published in International Socialist Review.