This statement was signed by 177 organizations attending the World Social Forum in Tunisia last week. 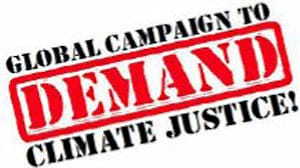 The international climate negotiation is not the only arena of our struggles for climate justice. But it is a critical one which now more than ever requires much stronger concerted efforts — to counter moves by powerful governments, international institutions and global corporations that will bring more harm to people and planet, and to fight for global measures that will stave off catastrophic climate change and enable people to deal with present and future impacts.

To pave the way for more powerful collective campaigning – several organizations worked together on a call for a “Global Campaign to Demand Climate Justice” that is directed at all governments and the international climate talks and effectively combines “inside” and “outside” actions.

The call serves as an appeal and invitation to work together in advancing the demands outlined. These demands are expressed only in general terms in the Call but certainly should be expanded and substantiated based on unities already reached by climate justice movements and updated to address current developments. We urge you to join the Global Campaign to Demand Climate Justice and sign on to the call as an expression of your commitment! Please contact: DemandClimateJustice@gmail.com

We are movements and organizations engaged in many struggles for a new world – a world in which the needs, interests, rights and aspirations of peoples everywhere have priority over the profit of corporations and the excess of elites. In the years ahead, our solidarity and collective action is extremely crucial. Climate change is already having devastating impacts globally and is accelerating. The window for preventing the breach of tipping points and stopping climate catastrophe is rapidly closing.

Climate change is more than multiplying the sufferings of people already burdened by the global injustices of hunger, dispossession and violation of human rights. It is a crisis that also threatens to wipe out vast populations and profoundly change life on Earth. We must act with clarity, cohesion and courage if we are to stabilize the Earth’s climate system and secure a just and sustainable world.

Like other global crises, climate change arises principally from historically unequal economic and social structures, from practices and policies promoted by rich, industrialized countries, and from systems of production and consumption that sacrifice the needs of the many to the interests of a few. The affected peoples of the world bear little responsibility for the climate crisis yet suffer its worst effects and are deprived of the means to respond.

Addressing these challenges requires profound social transformation in all countries and at all levels – local, national and global. It requires a rapid shift to systems and methods of production and consumption that are compatible with the limits of the planet and are aimed at meeting the needs of peoples rather than the relentless pursuit of profit.

Part of the process of profound social transformation is fighting for and achieving immediate concrete results in terms of drastic reductions of greenhouse gas emissions and enabling people to deal with the impacts of the climate crisis.

It is in this light that we are engaged in the fight for an international climate architecture that is rooted in science, equity and justice.

Rather than honoring their historical responsibilities and legal commitments, governments of rich industrialized countries have been trying to reverse Climate Convention principles and dismantle existing agreements. This effort started with the so-called Copenhagen Accord, was advanced by the Cancun outcomes, and was further served by the adoption of the Durban Platform. Among other things, they are seeking to impose a domestic “pledge and review” system, deregulate multilateral climate rules and promote false solutions such as the expansion of carbon markets. Their efforts must be met with intensified resistance.

As part of a broader struggle to achieve climate justice, reparations for climate debt and a profound global transformation – we demand from all governments that if international negotiations are to mean anything, they must deliver outcomes that will:

Prevent catastrophic climate change and ensure just and fair sharing of drastic emissions reductions. Limit temperature rise to well below 1.5º C and bring it down to 1º C as fast as possible; Rich industrialized countries to fulfil their existing legally binding commitments and undertake drastic emissions cuts without offsets in line with their fair share of the global carbon budget that takes into account historical per capita emissions; Offsets and other loopholes must be removed; The US must commit to comparable targets, based on its historical responsibility;

Ensure adequate and appropriate finance on the basis of countries; responsibility for climate debt and obligation to make reparations to all affected peoples. Rich, industrialized countries to cover the full costs of enabling peoples of developing countries and other affected communities to deal with the impacts of climate change (including past, present and future losses) as well as the costs of enabling developing countries to shift to equitable, post carbon sustainable systems; Climate finance must not be in the form of debt-creating instruments and should be channelled through a democratic and accountable global fund that is independent of other international financial institutions and upholds the principles of direct access and country-determined, participatory decisions on the use of funds.

Take decisive steps towards the profound transformation of the system based on equity, science and the rights of peoples to live well in harmony with and respect for Mother Earth. Transform social and economic structures and technologies and re-orient policies to move away from profit-driven, growth oriented, high-carbon, elite-dominated exploitative systems and instead ensure a just transition to people-driven, equitable, and democratic post carbon sustainable development.

We call on governments to end years of delay and meet their moral, historical and legal obligations.

We urge all movements, peoples’ organizations, civil society groups and all concerned citizens to come together in a Global Campaign to Demand Climate Justice!