Book review: Essential reading on the battle to protect west coast land and water from predatory corporations and neoconservative politicians 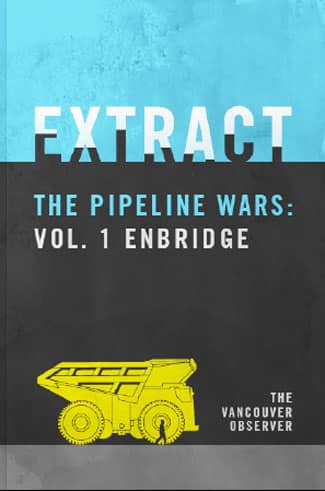 Out of the abundant riches of Canada’s West Coast comes this timely gem of a book from the Vancouver Observer, an award-wining independent newspaper. It records the historic struggle between a corporate oil extraction agenda with powerful political and media allies, and a broad coalition of BC First Nations, environmentalists of every sort, politicians and municipalities, and just plain folks who enjoy nature, who were having none of it.

The close to forty short articles, press releases, presentation and first-hand accounts, published throughout the past two years, give an up-close-and- personal experience of the issues and people on all sides in this truly epic confrontation.

The first piece describes a meeting in a Vancouver boardroom where Endbridge executives mesmerize a corporate audience with the necessity of the oil industry, and in particular of their Northern Gateway pipeline project. Northern Gateway would pump Alberta tar sands over the Rockies to the tiny port at Kitimat at the head of Douglas Channel, in the heart of the Great Bear Rainforest, one of the few remaining temperate rainforests in the world. Given the slumping price for heavy bitumen oil, and the political hold-up with the US Keystone XL pipeline to Texas refineries, there is a great deal of pressure on the oil industry to get its expensive product out of land-locked Alberta to markets in the Pacific rim. As a result, confident projections are made about tens of thousands of potential employment opportunities, the state of the art oil spill security controls and, although not legally required, the support of some native communities. Only occasionally is there an embarrassed collective shiver in the room as protest chants filter in from the street outside.

Subsequent articles take us into traditional First Nations communities along the coast, especially in the Haida Gwaii region, to talk with the people most exposed to the risks associated with oil transporting through their fragile and interconnected ecosystem, large sections of which are designated world heritage sites. Many people are not opposed to resource development as such, as many communities are affected by high rates of unemployment, but few are prepared to put at risk the environment that sustains their existence and cultures. Above all they want to be fully consulted before they give their consent to economic activities that might be developed in their unceded territories.

In the numerous demonstrations, public meetings and interventions reported in the book, First nations, as defenders of their land and the waters that sustain them, repeatedly make clear they are determined to fight to protect their territories. The sacredness with which they regard the natural environment is grounded in the knowledge of the place their people have lived in for thousands of years and its centrality to their culture and way of life. It is who they are.

In spite of prohibitive costs in time and money, over 800 individual, native groups and civic organizations spoke out against the project at the travelling Joint Review Panel (JRP), an extension of the increasingly discredited National Energy Board. In Smithers, a small community in the BulkleyRiverValley, Elsie Tiljoe of the Wet’suwet’en First Nations, spoke for many of her people when she said: “…her grandmother told her to look out for the territory. She wrote a song: “Our territory Is our livelihood, our territory is our livelihood. We live off our land. Law, Language, Land. Connection of the land and of the animals. Enbridge don’t step on our land. Our territory is our livelihood, do not step on our land.”

At a later Vancouver demonstration Chief Ruben George of the Tsleil-Waututh First Nation said: “We want to make it better for our children, for your children and, because the owners of Enbridge and Keystone are too blind to see, we’re doing it for their children too. Yes, we are going to win, to stop it, to make a difference. We will stand up for our lands, for future generations, for the spirit of the teachings of where we come from, and that’s the earth.”

Popular opposition increased when details emerged about the huge 2010 rupture of Enbridge’s Michigan pipeline, that spewed millions of liters of oil into the KalamazooRiver affecting the lives of thousands of people. Many people in BC are still acutely aware of the consequences of the 1989 Exxon Valdez tanker disaster that had a devastating impact on the coastal waters and communities in Alaska.

Numerous municipalities and community organizations throughout BC began passing motions questioning the project’s viability. Politicians of all stripes came out against it. Even provincial Liberal leader Christie Clarke objected that = BC wasn’t getting enough royalties from the risky proposal.

Environmental groups, such as Greenpeace and ForestEthics, broadened the devate by identifying the Alberta tar sands as a major contributor to the climate crisis. Given the climate-changing carbon emissions of bitumen processing, James Hanson, NASA’s chief climate expert, is famously quoted as saying “if the Alberta tar sand continues to be developed, it will be game over for the climate.”

Later analysis by the Canadian Centre for Policy Alternative reveals that Enbridge’s employment projections for the project are wildly misleading, with only a few thousand short-term jobs during the construction phase of the pipeline, and only a few hundred on an ongoing basis. Most of these jobs would go to local inhabitants most affected by the pipeline.

As public sentiment began to turn against the proposed pipeline the Harper neoconservatives came out in force. They are desperate to ram through their national economic plan to return the country to its historic revenue- generating resource modal. Federal Minister of Natural Resources Joe Oliver smeared critics as radicals and extremists financed by NGOs from the US bent on sabotaging the national interest. A few weeks later a new counter-terrorism report put out by Public Safety Minster Vic Toews lumped environmentalists among “issue based domestic extremists” who were a threat to the national security. This was followed up the infamous corporate-friendly Bill-37 which eviscerated  environmental oversight legislation for development projects in inter-coastal waterways right across the country.

These initiatives have had little effect on popular opinion, and in many respects are only increasing resistance to the Harper agenda. What is becoming increasingly apparent is the fundamentally different value systems crystallized by this struggle. On the one hand there are dominant values of individualism, private property and the frenetic drive for ever-increasing profit as represented by corporate interest and their political and media allies. On the other, a value system shared by both First Nations and many environmentalists, that is based on people’s needs, collective ownership and responsibility to protect and to nurture the land on which all human culture depends. This synergy between traditional native values and progressive social movements is recognized by an increasing number of people in this country and internationally.

In an informative appendix, retired West Coast marine expert Capt Mal Walsh puts a final nail in the Northern Gateway coffin. He clearly lays out the administrative and logistical safe guards that would be needed in the Kitimat area to cope with up to 400 tankers a year navigating through one of the most hazardous archipelagos in the world. He makes the case that if the costs of providing these taxpayer-funded essential servicesare factored in to the overall costs, the Northern Gateway pipeline is not economical viable. His final assessment is that the project is a train wreck waiting to happen … in this case a shipwreck.

This must-read collection of articles is a first-hand account of what is happening in BC as well as an inspiration to rest of us to engage in this defining political struggle of our time. While the battle is far from over, the record shows that a broad alliance of social forces is present to challenge and overcome the corporate forces responsible for our increasingly disturbed niche on the planet.

Extract: The Pipeline Wars is available as an ebook from iTunes and Amazon Canada. A paperback edition can be purchased through the Vancouver Observer website and in selected bookstores.

John Sharkey is a community activist who lives in the Bain Co-op in Toronto. He is a member of the Toronto Stop Line 9 Committee.