Building factory farms in urban skyscrapers is promoted as a way to fix our broken food system. Despite the good intentions of its advocates, it’s a fantasy, an unrealistic techno-fix that can only divert attention from the need for real change.

Building factory farms in urban skyscrapers is promoted as a way to fix our broken food system. Despite the good intentions of its advocates, it’s a fantasy, an unrealistic techno-fix that can only divert attention from the need for real change. 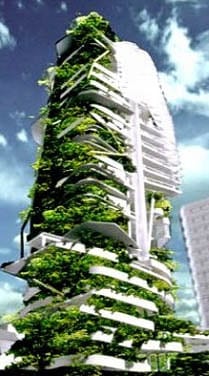 Why, after more than a decade, does the idea of “vertical farming” keep gathering momentum? Why hasn’t it collapsed under its own weight of illogic? And why is media coverage of vertical farming almost universally positive, often enthusiastically so?

I suppose we shouldn’t be surprised when a fantasy persists and thrives despite being unrealistic; after all, that’s what fantasies do. And the vertical-farming concept, unlike, say, creationism, aims at worthy goals. But when a pipedream comes to be regarded, wholly uncritically, as a means of fixing our broken food system, it becomes a dangerous distraction.

Out here in Kansas, for example, farmers and agribusinesses often back up their resistance to much-needed systemic change by claiming that America’s urban-suburban majority has no understanding of what it takes to produce food. And when they learn that city people are wanting to stack fields of crops one above the other, you can be sure that their convictions are reinforced.

Vertical farming, as originally conceived by Dickson Despommier, a professor of public health at Columbia University, would involve using the floorspace of tall urban buildings for growing food plants through largely hydroponic methods. This is envisioned as a way to integrate food production with dense human populations, increase production per unit of land area, protect crops against pests without the use of chemicals, and take vulnerable agricultural soils out of production by relocating crops to cities. It can, in fact, achieve none of these goals.

The most obvious problem is that of scale. Despommier’s initial, commendable objective was to help prevent soil degradation. But to benefit the continent’s agricultural soils on a meaningful scale would require substituting floorspace in buildings for a substantial share of cultivated land. Otherwise, vertical farming would simply be adding a little bit to production without taking the burden off the countryside.

But what if we committed to making at least a modest start anyway, by converting U.S. vegetable production from a horizontal to a vertical enterprise? Vegetables (not counting potatoes) occupy only 1.6% of our total cultivated land, so that should be no problem, right? Wrong. At equivalent yield per acre, we would need the floorspace of 105,000 Empire State Buildings. And that would still leave more than 98 percent of our crop production still out in the fields.

It is indeed vegetables, mostly leafy ones, that are envisioned in many vertical farming plans. That is appropriate, because such plants do not suffer as much from sunlight deprivation as do other crops. And the bulk of the plants in a true vertical farm will be deeply sunlight-deprived. If it reaches plants at all, direct sunlight would be reduced in intensity by the glass itself; the light would strike only a few plants at a time—those near the glass walls—usually at a low angle and only for a portion of the day; and those peripheral plants would shade plants that are deeper into the room.

(Windows can admit enough light for to see your way around the center of a room on a sunny day; however, vision and photosynthesis are very different processes. Crop plants, if they’re expected to produce a harvest of food, require many times as much light as you require indoors.)

Breathless reports of salad greens being grown indoors under artificial light are becoming a staple of the food media. But my colleague David Van Tassel and I have done simple calculations to show that grain- or fruit-producing crops grown on floors one above the other would require impossibly extravagant quantities of energy for artificial lighting. That’s because plants that provide nutrient-dense grains or fruits have much higher light requirements per weight of harvested product than do plants like lettuce from which we eat only leaves or stems. And the higher the yield desired, the more supplemental light and nutrients required.

Highly efficient LED lighting would improve the overall system only marginally. Meanwhile, Despommier has suggested that vertical farms’ electrical demand be met with renewable sources. But to divert any portion of that tiny amount of sunlight that we manage to harvest and convert into electricity—with wind turbines, photovoltaic arrays, etc. (all arranged horizontally, by the way)— and then, in essence, convert the electricity back into light for illuminating plants that would have grown much better out in the free sunlight in the first place, is something only a society wallowing in a huge energy surplus would even consider. Green plants themselves are solar collectors and should be treated as such.

As the vertical-farm idea’s increasingly obvious flaws are pointed out, proponents respond with a lot of tweaking. And as plans evolve, they are looking both less vertical and less like farms (as when they involve growing food on Ferris wheels). Some believers who’ve caught onto the lighting problem are now talking about giant pyramids or terraced lean-tos that would expose all plants to light from above.

That makes life a lot better for the plants, but such Hanging-Gardens-of-Babylon designs, like roof gardens or “green wall” arrangements that would display plants on the south faces of buildings, do not augment land area in the way intended by the original vertical-farm design.

Whereas a bona fide vertical farm, if it could work, would in theory multiply the cropped area many times over, a pyramidal or diagonal structure would provide no more effectively sunlit cropped surface than a vacant lot of similar size, and at a vastly greater cost.

Lighting is only the most, um, glaring problem with vertical farming. Growing crops in buildings (even abandoned ones) would require far more construction materials, water, artificial nutrients, energy for heating, cooling, pumping, and lifting, and other resources per acre than are consumed even by today’s conventional farms—exceeding the waste of those profligate operations not by just a few percentage points but by several multiples.

Vertical enthusiasts also claim that crops grown in buildings chemical-free will somehow be protected from diseases and pests, but as anyone who has worked in a greenhouse can tell you, epidemics and infestations can explode into total losses overnight on plant grown in confinement.

And raising crops in such restricted spaces would, necessarily, mean substituting a lot of human labor for much of the mechanical power now used in farming. That’s fine environmentally, but who will own these enormous high-tech facilities, how much of the hard work—hauling, transplanting, tending, harvesting, more hauling—will be done by idealistic entrepreneurs, and how much will end up being carried out by the same underpaid, overexploited people who do all that grueling stoop work that currently provides us with most of our vegetables and fruits today?

The goals of the vertical-farming concept are generally laudable (Despommier’s Wikipedia-page photo features a slide showing the word “hunger” canceled with a red circle-and-slash) but it has virtually no potential for saving soil or strengthening food security. It’s just another proposal (if probably the most high-input one) for urban agriculture, a practice intended to reduce the distances that food is transported while supporting local economies.

There’s no doubt that local fruit and vegetable production is good for consumers. But even if we planted every urban flat roof while deforesting and farming all of America’s front and back yards and open urban spaces, we could supply only a tiny portion of the nation’s food supply. Add in those 105,000 Empire State Buildings full of vegetables, and we’d still have well over 95 percent of food being produced outside of cities.

And ecological impact cannot be estimated simply by counting food miles; food’s ecological footprint lies mostly in production, not transportation. Were vertical-farm planners to add up the enormous quantities of energy and materials required for construction, maintenance, operation, and eventual dismantling, they would be forced to conclude that the structures they’ve envisioned can succeed only in supplying the more affluent city-dwellers with leafy salads.

If we want to protect North America’s soils, the most effective immediate action would be to stop degrading scores of millions of acres every year to raise corn and soybeans for making biofuels and feeding cattle. Those landscapes should be restored as grasslands (and, eventually, mixed stands of perennial grain crops.)

The current corn-and-soybean system serves only to keep animals alive and unwell in confinement, with an extraordinary waste of resources. But if we want to resolve the myriad problems currently created by factory-farming animals in sheds and feedlots, we’ll never do it by factory-farming plants in skyscrapers.

Reposted from Counterpunch, with permission from the author. Stan Cox blogs at Losing Our Cool; his new book, Any Way You Slice It: The Past, Present, and Future of Rationing, will be published in May by The New Press.