After repeatedly failing to overturn the $19 billion judgment for destroying rain forest, Chevron is now trying to hide its vast wealth in international subsidiaries. 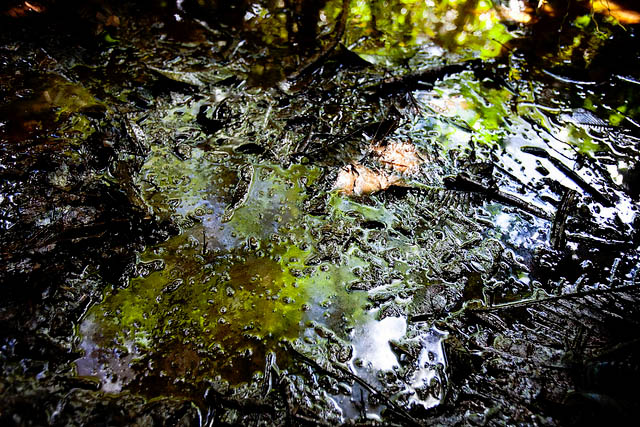 Crude contaminates an open toxic pool in the the Ecuadorean Amazon rainforest near Lago Agrio. It was abandoned by Texaco (now Chevron) after oil drilling operations ended in 1990 and was never cleaned up.  Photo by Caroline Bennett / Rainforest Action Network

From The Chevron Pit, a blog maintained by the team suing Chevron for the oil giant’s human rights crimes in Ecuador and around the world.

After a dreadful series of legal setbacks, it sure didn’t take long for Chevron to come up with a new tricked-up defence to evade the $19 billion Ecuador environmental judgment.

Like Chevron’s many other failed defences in the Ecuador case, this one won’t wash either.

Let’s review how we got here.

The company’s first line of defence in the 1990s was — we didn’t really dump billions of gallons of toxic waste into the rainforest.  That lie was put to rest by multiple courts around the world based on overwhelming scientific evidence, as confirmed by numerous independent media outlets such as 60 Minutes.

Then, Chevron tried to claim that the devastated communities in Ecuador sued the wrong party.  According to Chevron, they should have sued Texaco, the company that operated in Ecuador.  That argument was rejected out of hand by appellate courts in Ecuador and the U.S.

Then the company blamed Petroecuador, Ecuador’s state-owned oil company and Texaco’s former partner in Ecuador.  But various courts rejected that defense after evidence surfaced that Chevron’s predecessor company was the exclusive operator of the oil concession in Ecuador.

When that defense failed, Chevron tried to claim Ecuador’s government released it from any clean-up obligations.  But courts found this so-called “release” did not cover the private claims of the rainforest communities, and in any event was a product of fraud.

Left with virtually no options, Chevron then tried to coax New York federal Judge Lewis A. Kaplan to enjoin the villagers from enforcing the Ecuador judgment anywhere in the world.  This unprecedented action caused an international furor, and a U.S. appellate court quickly reversed Kaplan.

When Chevron hired the respected litigator Ted Olson to appeal that setback to the U.S. Supreme Court, the company was rejected yet again.   By this point, nobody seemed to be able to put lipstick on Chevron’s pig.

Well, now Chevron claims that its 73 revenue-producing subsidiaries around the world should be off-limits to the Ecuadorian villagers as they try to collect on the $19 billion judgment.

Consider the absurdity of Chevron’s latest gambit.  The company discloses in its annual report that almost all of its revenues are generated from subsidiaries around the world which are managed by the parent company from its global headquarters in California.

So according to Chevron, if you win a lawsuit against the parent company it simply won’t pay up.  Yet at the same time, its subsidiaries are off-limits because their assets are not really owned by Chevron or connected to its activities in Ecuador.   Chevron already stripped almost all of its assets from Ecuador.

The order by the Argentine court last week to freeze Chevron assets in that country – a shareholder shocker if there ever was one — was met with an apoplectic response at the company’s headquarters. “The plaintiffs’ lawyers have no legal right to embargo subsidiary assets in Argentina,” huffed spokesman James Craig.

Yes they do, James.  Hiding behind subsidiaries to avoid paying liabilities is now considered an antiquated notion in the legal world.  It rarely if ever works, particularly when the judgment is out of the country where you wanted the trial held and where you promised to pay up if you lost.

There’s another reason Chevron spokesman Craig is out of sorts.

Chevron discloses that about 80% of its annual revenue comes from subsidiaries outside of the U.S. Chevron’s subsidiaries in Canada and Argentina, two countries where the affected communities have filed seizure actions, produce an annual revenue stream of $2 billion to $3 billion for the parent company.   The rainforest communities can collect the full amount of their judgment in a few years just be diverting those funds to a clean-up.

The arithmetic Chevron-style works like this: when it comes to counting $240 billion in annual revenue collected from subsidiaries around the world, Chevron is as proud as a peacock.  Every penny counts.  But when it comes to paying out its environmental liabilities, there is nothing in the piggy bank.

We now get it. Under Chevron’s twisted logic, after fighting in court for almost two decades, the Ecuadorian who are suffering from cancer and birth defects now have no place to collect their winning judgment.  This is how a large oil company convinces itself that it is entitled to impunity for its human rights crimes.

It is well-documented that Chevron’s management team, led by CEO John Watson and General Counsel R. Hewitt Pate, is mired in conflicts of interest when it comes to Ecuador. Watson gave Pate a 75% raise last year – for a total compensation of $7.8 million – after he lost the Ecuador case.  The company has admitted under oath that it faces “irreparable harm” from the Ecuador judgment but outside court it claims the risk is no big deal.

Any court in the civilized world that hears this case will not allow Chevron to manipulate the corporate form in this fashion.  The company is acting like a Deadbeat Dad fleeing a jurisdiction to avoid a child support payment.

The day of reckoning for Chevron management is fast approaching.