“Socialism is neither a utopia nor a guarantee. It is however the place and the time where and when the unity of nature becomes a real possibility.” 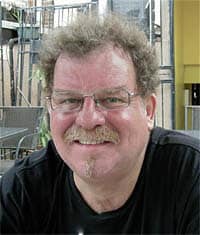 Like many others, I was saddened to learn last month of the early death of Neil Smith, a brilliant Marxist geographer and a dedicated anti-capitalist activist.

At the time of his death, he was Distinguished Professor of Anthropology and Geography at the Graduate Center of the City University of New York (CUNY).

His book Uneven Development: Nature, Capital, and the Production of Space (Blackwell 1984, updated edition published by Verso in 2010) is an invaluable contribution to our understanding of the historical processes that have separated humanity and society from the rest of nature, and the potential for reunification on a new basis.

This is one of my many favorite passages in Uneven Development.

“Capitalism develops the forces of production to the point where the unity of nature again becomes a possibility. But under capitalism this unity is only ever a tendency, continually promised by the drive toward universality. Capitalism creates the technical means but cannot itself fulfill the promise.

“The option as Marx said is socialism or barbarism; either is a unity of nature. The cruel irony of this option is more acute today, for with the threat of nuclear war, barbarism unifies nature only by obliterating it.

“But the class society that threatens the final barbaric defeat also offers the ambition of socialism. Socialism is neither a utopia nor a guarantee. It is however the place and the time where and when the unity of nature becomes a real possibility. It is the arena of struggle to develop real social control over the production of nature.

“Early in his life, Marx pictured communism as the ‘genuine resolution of the conflict between men and nature.’ Whether this is true, remains to be seen — and to be done.

“What is certain is the struggle over this conflict, the revolt against deprivation. In many ways it is a struggle to control what is “socially necessary.”

“Like pollution, much of the production of nature is the indeliberate, uncontrolled result of the production process. They may be integral products of the labor process, but pollution and many other produced parts of nature are not bearers of ‘socially necessary labour time.’

More from my notebook