“We will continue mobilized in unity and struggle and, in combat against our common enemy, we will build a country and a society that is just, compassionate, and sustainable.”

Declaration of the Unity Meeting of Workers and Peoples of the Countryside, Waters, and Forests, meeting in Brasilia, August 20-22, 2012. 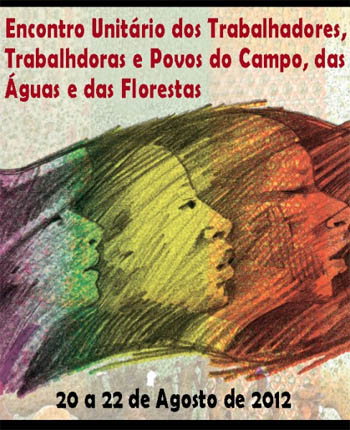 From Friends of the MST

The meeting is a response to the challenges of our country to overcome inequality in land distribution, which remains unchanged since the ’20s, but with economic, social, cultural and environmental risks as a result of the primary specialization of the economy.

The capitalist project underway in Brazil, represented in the countryside by agribusiness, aims to accumulate capital in the primary sector, serving the interests and the rule of foreign capital by means of the transnational corporations.

The offensive of this project causes the crushing and displacement of workers and peoples of the countryside and of the waters and forests. Furthermore, it prevents the implementation of agrarian reform, the recognition and demarcation of indigenous and afro-descendant territories.

On the other hand, it has negative social and environmental impacts, with increasing violence, violation of the territories of fishermen and forest peoples, the weakening of family and peasant agriculture, the subjection of workers and consumers to contaminated food and environmental degradation. The meeting demonstrates that a project is essential for life and work, for the production of healthy foods on a scale sufficient to meet the needs of society, which respects nature and creates dignity in the countryside.

For this reason it is necessary to carry out agrarian reform, defend our territorial sovereignty, ensure food sovereignty, develop agroecology, with the centrality of family and peasant agriculture and traditional forms of production and rural, indigenous and afro-descendant education as strategic tools for emancipation

You can read below the final declaration of the Unity Meeting of Workers and Peoples of the Countryside, Waters, and Forests.

For Land, Territory, and Dignity!

After centuries of oppression and resistance, “the oppressed and exploited peasant masses ” in a demonstration of their political unity and building a national proposal, gathered at the “First National Congress of Farmers and Agricultural Workers on the character of the land reform,” in 1961, in Belo Horizonte. By that First Congress peoples of the rural areas, assuming a role as political subjects, highlighted the centrality of land as a space for living, production, and socio-cultural identity.

This unity and political strength led the João Goulart government to incorporate land reform as a part of its basic reforms, opposing the interests of the elites and becoming one of the elements that led to the coup of 1964. The coup governments persecuted, tortured, imprisoned, and assassinated the leaders but did not destroy the dream nor the peasant struggles for a piece of land.

After decades of resistance and denunciations of oppression, the mobilizations and social struggles created conditions for the resumption and broadening of peasant organizing, giving rise to a diversity of subjects and agendas. Together with the struggle for agrarian reform, the struggle for land and for territory began to establish individuals as landless, afro-descendants, extractivists, artisanal fishermen, coconut breakers, traditional communities, family farmers, peasants, rural workers and other peoples of the countryside, the waters, and the forests. In this process of formation of political subjects, women and youth asserted themselves in the struggle against patriarchal culture, for visibility and equality of rights and dignity in the countryside.

In another demonstration of coalition building and political unity, we men and women of all ages, meet 51 years later, in Brasilia, at the National Unity Meeting of Workers and Peoples of the Countryside, the , Waters, and Forests, with the centrality of the class struggle around the world, currently expressed in the struggle for Agrarian Reform, Land, Territory, and Dignity.

We are building unity in response to the challenges of inequality in the distribution of land. As in the ’60s, this inequality remains unchanged, deepening the economic, social, cultural and environmental risks as a result of the primary specialization of the economy.

The first decade of the 21st century reveals a project in which the conservative modernization of agriculture, initiated by the military, interrupted in the nineties, has been revived and resumed as primary expansion project for the external sector in the last twelve years, under the name of agribusiness, which represents our common enemy.

This project, in its essence, produces inequalities in land and social relations in the rural environment, deepening external dependency and carrying out an ultra-predatory exploitation of nature. Its protagonists are finance capital, the large production and marketing chains for global commodities, the large estates, and the Brazilian state in its financing functions – including using public funding for large projects and infrastructure works — and deregulating the land.

The capitalist project underway in Brazil pursues capital accumulation, specializing in the primary sector, promoting the super-exploitation of agriculture, hydroelectricity, minerals and oil. This super-exploitation, in the name of the need to balance foreign transactions, serves the interests and rule of foreign capital in the rural areas through the agro- and hydro-business corporations.

This project causes the crushing and displacement of workers and peoples of the countryside and of the waters and forests. Its social and environmental consequences are that agrarian reform is not carried out, indigenous and afro-descendant territories are not demarcated and recognized, violence is increased, the territories of the fisher folk and peoples of the forest are violated, family and peasant farming is weakened, workers and consumers are subjected to contaminated foods and to living with environmental degradation. There are also socio-cultural consequences such as the masculinization and the aging of the countryside because of the lack of opportunities for youth and women, resulting in the lack of social reproduction of the peasantry.

Even creating conflicts and being the enemy of the peoples, the Brazilian state in its Executive, Judicial, and Legislative branches historically has been investing in strengthening the model of development that is concentrating, exclusive, and degrading. Despite the problems created, the successive governments — including the current one — support the agro- and hydro-business option.

Brazil, as a country rich in land, water, natural resources, and biodiversity, attracts speculative and agro-export capital, intensifying the negative impacts on the indigenous, afro-descendant, traditional communities and peasant territories and populations. Externally, Brazil is becoming the lever for a neo-colonizing project, expanding this model into other countries, especially in Latin America and Africa.

A project for life and work for the production of healthy foods on a sufficient scale to serve the needs of society, which respects nature and creates dignity in the countryside is becoming indispensable. At the same time, the rescue and strengthening of the peasantry, the defense and recovery of their cultures and knowledge is necessary for alternative projects of development and society.

Given this, we uphold:

We workers, peoples of the countryside, the waters, and the forests, demand that the policies and actions of the Brazilian state be redirected because the rural areas cannot take it any longer. We will continue mobilized in unity and struggle and, in combat against our common enemy, we will build a country and a society that is just, compassionate, and sustainable.