Australia’s movement against Coal Seam Gas (fracking) continues to set an inspiring example for environmentalists around the world. This article is from the front page of the Illawarra Mercury, October 21, 2012. The Stop CSG video was posted on the newspaper’s website.

3000 CSG PROTESTERS SPELL IT OUT

More than 3000 people put their bodies on the line to spell out their anti-coal seam gas message to NSW [New South Wales] Premier Barry O’Farrell.

They sat down on the grass at Bulli Showground yesterday to form a human sign that read ‘‘Protect H2O, stop CSG!’’ 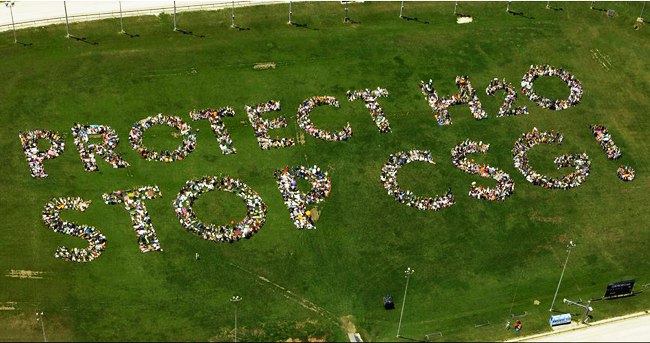 Stop CSG Illawarra organiser Jess Moore said the protest was sparked by Premier O’Farrell’s backflip on a pre-election promise that, if he were elected, he would ensure that mining would not occur  in any catchment area.

Since then, Ms Moore said, the government has allowed companies like Apex Energy and Magnum Energy (previously known as Ormil Energy) to drill exploratory boreholes close to the water catchment area, around Darkes Forest and Maddens Plains.

“These are areas so protected that if I walked into them I could be fined up to $44,000, and we have 11 exploration coal seam gas wells approved in that area.

“And we know that the company has a plan for 150 to 200 wells across our drinking water catchment.”

“It’s absurd in 2012 that we have to take this kind of action to get our government to protect our drinking water,” she said.

The first was on Austinmer Beach last year.

Included among the protesters was the Duffus family from Tarrawanna, who formed part of the exclamation mark in the human sign.

Father Chris Duffus said they has come because their children, Ella, 9, and Wil, 7, were interested.